I carry my SP2 in a sleeve when I'm mobile. The other day, I dropped the sleeve with the Surface in it. :cry: I broke the fall with my foot, so in reality it only really fell about a foot before it hit the ground. The outcome is the left side of my screen is messed up. The glass isn't cracked, but I'm guessing the LCD display itself got damaged. Yea. Yea. It's my fault, but I'm disappointed the hardware couldn't tolerate the fall.

At any rate. I'm going down to the MS Store in which I'm pretty sure they'll want to swap out the entire unit and I'm DOUBTING they'll let me take the device(s) apart to swap the HDD.

What's the BEST method for getting a system state backup? I spent a lot of time installing apps and personalizing my SP2. 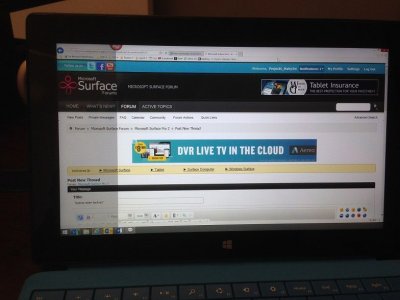 You know I've been curious, how comprehensive is Windows 8.1's SkyDrive-based backup of system settings and data? Does it backup everything on the Metro side but not everything on the desktop side? Or does it not even backup 100% on the Metro side (ie. not *all* Metro app data)? In other words when SkyDrive restores your data/settings to a new SP2, where do you start at that point?

How about the Surface 2 with Windows RT, how complete is the SkyDrive system backup in this case? I just ask because at first glance it all looks similar to Apple's iCloud-based backup, which does let you restore everything to a new iPhone/iPad (after re-entering account passwords and re-downloading the apps)...

P.S. Does SkyDrive store your system backup in a hidden location? Because it doesn't seem to show up anywhere on the Windows Explorer mount or on the web.
B

But back to the original topic, I've been using StorageCraft's ShadowProtect Desktop imaging software to protect all my family's PCs for years (in lieu of Acronis True Image and other popular choices). I think some like PC Mag considered it the gold standard, and in fact Microsoft had licensed its Windows volume shadow copy feature from an early version of StorageCraft's technology (I think StorageCraft also licensed it to Symantec and other companies). All in all I've been happy with its live and incremental imaging (as well as remote management, hardware independent restore, virtual boot and physical<->virtual migration). Though, they used to provide a pre-built WinPE recovery CD but now offers either a Linux Live CD or the tool to build your own WinPE.

As an alternative, this page reviews some FREE imaging tools as well. Apparently some such as Macrium Reflect and Paragon Backup & Recovery support hot/live imaging or differential/incremental imaging now. I personally had only tried Drive Image XML and several Linux cloning/imaging tools in the past (all of them for offline imaging)...


P.S. For anyone that has done a sector-level image restore of an SP2, does the SkyDrive settings backup still come into play or would it be redundant? Would Windows, SkyDrive, and the Store see the replacement SP2 as the old machine, or a new machine? Any issues with paid software licenses having to be transferred?

Just asking because I too expect to exchange my own SP2 in the future as it has a few symptoms. Then again I may just want to re-install everything from scratch since I had used the original as a test machine to install/uninstall some software, and I might not want to restore any bloat that had built up (though I'll have to do an audit of all the software licenses I'm using)...
Last edited: Feb 6, 2014
A

I've used paragon hard disk manager with 100% success with win8. I've only cloned drives with it, but I can imagine that an image made with it would work perfect too. They have a trial of the software too.
A

beq said:
P.S. For anyone that has done a sector-level image restore of an SP2, does the SkyDrive settings backup still come into play or would it be redundant? Would Windows, SkyDrive, and the Store see the replacement SP2 as the old machine, or a new machine? Any issues with paid software licenses having to be transferred?
Click to expand...

I've had a few Windows 8 devices now. When signing in to a device after a reset or a new device, I always use the same Hotmail address. It sees my previous Win8 devices and asks me if I want to install my apps from the store and preferences too I believe. I have always told it no, so not sure what it would install.
B

Since you have a SP2 and I have a SP can not help you with making a recovery USB thumb drive, I have Win 8.1 update installed, so:
1: make a usb boot recovery drive.
2: Get your self a usb 3 external drive. Format the drive as ntsf using disk manager. Copy your user home directory to the ext drive to check function.
3: Open File History in the lower left is 'System Image Backup'
4: Do a system image backup to the external usb 3 drive.
5: Setup File History to do your files backup to save off as much as possible. If you have a lot of stuff use the USB 3 drive.
6: When it comes to backup's more than one type is better.
7: On new system boot the recover usb thumb drive.
8: recover from file

Also see, this has the recovery portion;
How to Create and Restore System Image Backups on Windows 8.1

I use Macrium Reflect and have been very happy with it. It's fast and easy to use. I've also tested the recovery process several times and it works smoothly. I've even been able to restore from one tablet to another due to a warranty replacement.
OP
P

Thanks for all the replies. I tried going the Acronis route. I have a thumb drive with the Yum Multiboot, but couldn't get the Surface to boot off of it. Despite numerous forums threads on booting from a USB, I simply wouldn't work. One post mentioned something about 32 vs 64, but I honestly didn't spend a ton of time troubleshooting it.

Against my better judgement I went with the wbadmin CLI command to a laptop HDD mounted via USB. The backup seemed to go ok.

The folks at the MS store DID replace my SP2. While I didn't openly admit to dropping it, they swapped it out under the support plan I bought w/ no questions.

NOW for the bad news. The replacement SP2 isn't recognizing the HDD I backed up to! It's telling me the disk isn't initialized. I've tried multiple adapters on different computers and they're all giving me the same results:

Any last suggestions before I begin the long journey reinstalling everything? 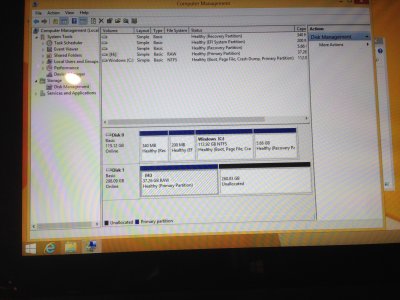 Good news that you have a new SP2.

OK did you make a USB thumb boot drive?

Other than your data what was backed up is semi-use less on the new system. When applications install they also set registry entries and these need to be reloaded at the time of application recovery.

Hmm do not understand why the ext usb drive is not recognized by the new system. If you have a Win 7 system around plug it in there to verify the drive. It is possible bad port on the new SP2.

To be able to restore your old system you really do need the usb recovery boot drive. Short answer you can not restore a drive you are currently running on. You must be booted on an alternate system to allow the target drive to be idle.

So patch the system then make a boot recovery USB thumb drive. Find another different usb 3 HDD and do another image backup. The system image backup I referred to above is the same wbadmin cli you used.

After you have all the backup images make an appointment at your local MS store and take all disks and thumb drives and ask them to help walk you through the restore. Especially since you have a suspect USB port. You bought the support policy see if a system restore lesson is included.

Hey everyone. Just an update on my saga. As I mentioned, Microsoft replaced my Surface with no questions asked. Kudos on the standup warranty.

I never was able to restore the image of my original SP2. The external 2.5" HDD that wbadmin.exe wrote a backup image to appeared as unformatted.

On a hunch, I loaded up GetDataBack for NTFS a FANTASTIC undelete/recovery program I've used with success in the past. Low and behold, there was a 71 GB .VHDX image file on the hard drive. Fortunately, I was able to recover it, mount it on the new SP2, and recover a lot of my data.

The lesson learned here, that I hope to pass on..... measure twice, cut once. Verify your backup before you separate yourself from the original drive!!!!!
You must log in or register to reply here.