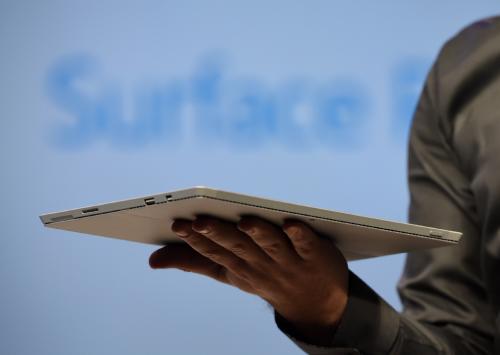 Global sales of tablet computers will see only slim growth in 2015, in a further cooling of a segment that was red-hot two years ago, a market tracker said Thursday

Washington (AFP) - Global sales of tablet computers will see only slim growth in 2015, in a further cooling of a segment that was red-hot two years ago, a market tracker said Thursday.

Tablets appeared to be on a tear two years earlier, but the market is being eroded by use of large-screen smartphones or "phablets" as well as slimmed-down laptop computers.

IDC said it expects "low but positive growth" for the market, with increased focus in the business sector and some gains for Microsoft Windows in the tablet market.

"Despite the growing popularity of phablets, there still remains a portion of the market that wants to use a larger device so they can tailor their experience to the appropriate screen size," said IDC analyst Jitesh Ubrani.

"Meanwhile, an increasing number of vendors behind small tablets are reducing prices and adopting features like voice calling to entice consumers to purchase their products over competing phablets, making the dynamics of phablets vs voice-capable tablets an interesting one to watch."

The Google Android system is expected to retain around 67 percent of the market this year, with its share slipping a bit to 62.9 percent by 2019, IDC said.

Apple's iOS platform used on the iPad is forecast to see a slight market erosion but still account for around one of every four tablets sold through 2019, according to IDC.

"Microsoft is doing a lot of good things right now and we believe the launch of Windows 10 later this year will not only have a significant impact on Microsoft's share of the market, but on the industry as a whole," said Jean Philippe Bouchard, IDC's head of tablet research.

"There is an appetite for a platform that can provide a productivity experience that remains consistent across multiple form factors and device types, and we believe Microsoft is well positioned to capture some of that demand."
G

Staff member
Interesting thing about the tablet market... I have a couple tablets I would upgrade if I could but neither vendor has chosen to make a newer version with current components and technology so I cant buy one. Seems the softening market has become a self fulfilling prophecy.
You must log in or register to reply here.

Consumers fall out of love with tablets, but now businesses are smitten instead