[Editor's Note: This is a copy and paste review from another source. Jeffrey did not intend to pass it off as our own original content.]

The Microsoft Surface Pro 3 is the third and perhaps final Microsoft-built tablet. It's a device that treads the gap between tablet and laptop, giving you a full PC experience, touchscreen and a detachable keyboard all in one package.

The previous Surface Pro tablets were functional but - like most tablets - the argument for buying one over a laptop or Ultrabook is a hard sell if you need to do more than check your email or browse the web.

Has Microsoft finally ticked all the boxes? Are we looking at the ultimate portable computer? We spent a week with the Surface Pro 3 to find out if it's a case of third time lucky. 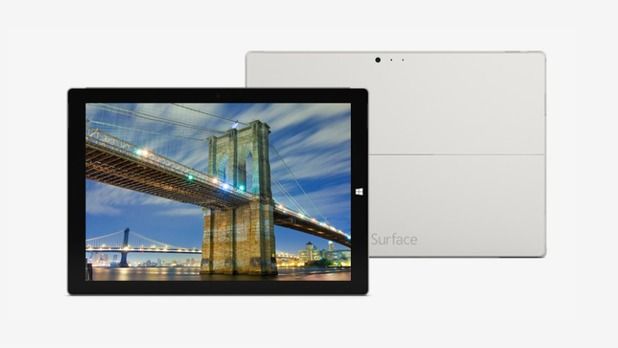 The Surface Pro 3 has a larger 12-inch display (up from 10.6-inches) and a 3:2 aspect ratio compared with the Surface 2. Those two changes increase the pixel count by 15% and display space by 36%. The reason for the changes is to make the tablet more akin to a piece of A4 paper.

An even more stylish design and sublime build quality make the Surface Pro 3 feel like a flagship product. Not even the iPad can match it in this department, especially when you remember this is a 799g tablet with a very fast computer processor inside.

The Type keyboard is your only option as the Touch keyboard has been ditched. The trackpad on the former has been made larger and by extension more usable. A folding section at the top of the tablet allows you to rest the keyboard at an angle, making typing feel more natural.

Another significant change is the kick stand. Now it will adjust to just about any angle up to 150 degrees so you can use the Surface Pro 3 in a variety of different situations. 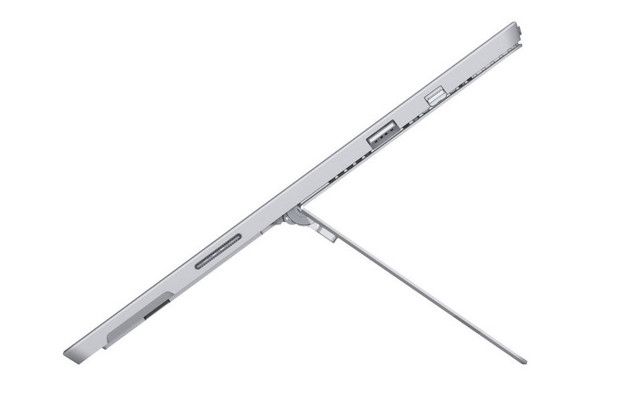 Like its predecessors, the Surface Pro 3 is made from magnesium and remarkably thin. A new cooling arrangement helps keep the powerful internals cool without any fan buzzing noise. It's a stylish design that reminds us of the sublime MacBook Pro and MacBook Air.

A mixture of the keyboard you can snap at an angle and the completely adjustable kickstand makes the Surface Pro 3 much more usable on your lap. This is a major plus because of the device weight and size, which makes it a bit heavy to hold up. The track stand seems to hold its position without fail.

We like how the Microsoft Surface Pro 3 Type keyboard has illuminated keys, including a light for Caps Lock. Small details like that show well-thought out design. It is easier to type on your average laptop keyboard, mind you, but we got used to the slightly cramped arrangement.

Another useful addition is the touch-sensitive stylus, which has a magnet inside so it can be stuck to the side of the Surface. Changes to the display and a new layout for the Stylus makes it far more usable, tracking movement and presses very accurately and with no delay. USB 3.0 ports are the cherry on the top, making it possible to attach just about any peripheral or storage device.

The stylus has two buttons, one for erasing (no longer do you have to turn the pen outside down) and the other for selection. A handy double tap of a button on top lets you capture an area of the screen and annotate on it. A single press of said button opens OneNote. Handy for the odd moment of inspiration and another extra that separates the Surface Pro 3 from the competition. 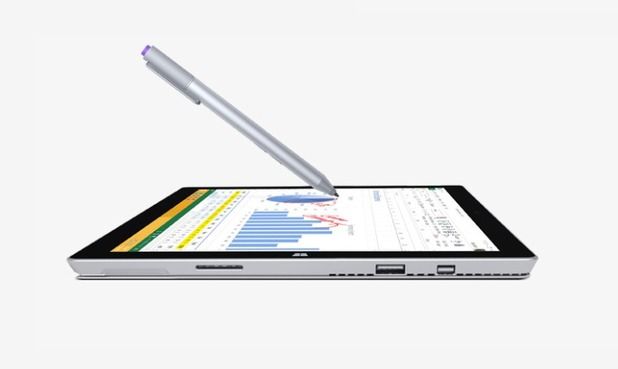 Performance is where the Surface Pro 3 excels. The Intel i3, i5 and i7, depending on spec, are extremely capable processors. Even the most budget Surface Pro 3 will make most devices feel sluggish, in part thanks to a minimum of 4GB of RAM. Windows 8.1 boots up in no time at all and there's rarely a task that causes much of a pause.

The cheapest model (£639) is no slouch and perfectly adequate for casual users, although storage space is more of a limiting factor once you take into account how much space Windows 8.1 takes up. At least 128GB would be preferable for us, even with access to the cloud and a microSD slot.

A higher spec model and the internal graphic in all Surface Pro 3 tablets will let you run 3D games, but expect to set the detail settings to low or medium at best. Still, at least the option of the odd PC game is there, which is great.

The top-spec i7 with 8GB of RAM and 512GB of storage is a mean machine, but will set you back £1,399. A lot of dough until you realise a top-end 13-inch MacBook Pro is the same price yet only packs an i5 processor. 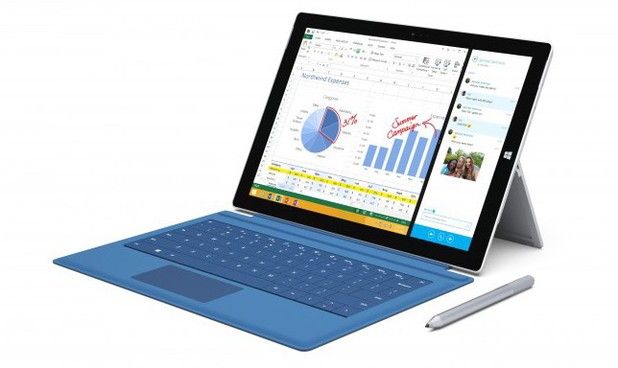 As displays go, the Surface Pro 3 is good but not brilliant. Your MacBook Pro with Retina, for instance, has more clarity. Still, the 2,160x1,440-pixel resolution is top-notch and the brightness is maximum searing. Unfortunately the reflective screen makes bright sunlight an issue, even though the viewing angle is wide.

There could be more clarity and sometimes pressing a small button or icon can be difficult, owing to a beyond full HD resolution on a smallish screen. At least the sensitive trackpad and stylus can rectify this shortcoming (or just plug in a mouse) and the aspect ratio gives you more display area to play with than a 13.3-inch MacBook Air.

The surface Pro 3 has two 5-megapixel cameras, a front-facing one for video calls and a rear-facing one for taking photos. Image quality for both is good, certainly enough to cope with a Skype call or the odd photo. Not that you will probably find yourself taking a photo with a bulky tablet very often.

Video quality is full 1080p for both cameras and is more than adequate for the odd cheeky selfie or Skype call. A definite improvement on the Surface Pro 2 and fit for purpose. 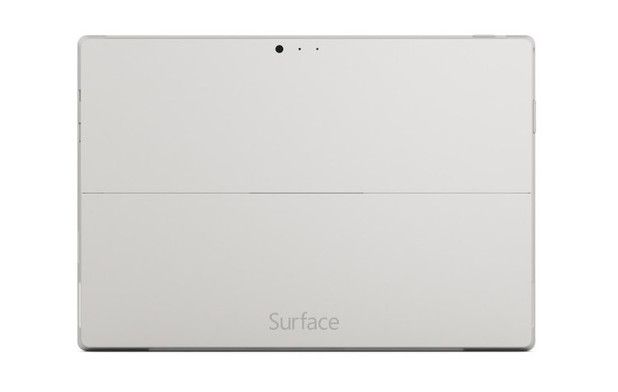 Windows 8.1 is standard on the Surface Pro 3. This is the latest Microsoft operating system with the latest update in tow. The tile-based approach is still in force, which will divide opinion. But at least you can now make use of a permanent start button and close tasks.

Essentially Windows 8 is split into two sections, the old Windows 7 desktop and the new Windows 8 start screen. There's a feeling of familiarity for anyone who has used a Microsoft product of old or new. We have come to appreciate the Windows 8 way of life as it is no less difficult to master than OSX.

Windows 8 works well whether used with touch, mouse or trackpad. It is easy to snap two tasks next to each other, simulating the benefit of having two screens. Although Microsoft Office will cost you extra, the cloud-based Word Online is a great alternative.

While most tablets are resigned to running just mobile apps, the Surface Pro 3's PC nature means you can run just about anything. If you can find a digital download, of course, as there's no disc drive. This makes the Surface Pro 3 incredibly versatile if you want to look beyond the somewhat limited Windows 8 Marketplace.

Windows 8 plays nice with all recent Microsoft products, including the Xbox (via Smartglass) and your Windows Phone 8 smartphone. Being able to use Xbox Music (formerly Zune) on all devices, for instance, is a real bonus and a bit of a bargain at less than £8 a month for unlimited streaming. 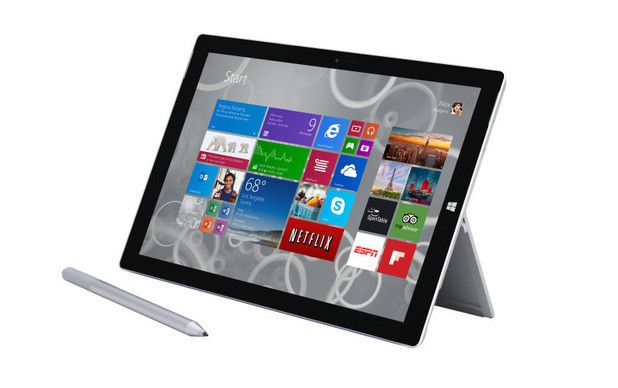 We found the Surface Pro 3 was capable of two days of moderate use - about the nine hours stated by Microsoft, in fact. A MacBook Pro can manage nine hours so the devices are on a par. Unfortunately a side-by-side test wasn't possible, but we get the feeling it would be a close match.

The Surface Pro 3 proves you can have an incredibly powerful portable computer in a slim form-factor. Few laptops are even half as slim. As a mobile computer setup that packs desktop computer performance, nothing else comes close.

Sadly there's no getting away from its competition. A laptop is nearly as portable and slightly easier to use on a train, while an iPad or Nexus 5 are far cheaper and better suited to tablet computing duties.

Then there's stiff competition from the cheaper Chromebook camp and plucky upstarts like the Acer Aspire Switch 10, which offer a full Windows 8 experience with a detachable keyboard and touchscreen. You can spend less than the entry level £639 model and get a very decent experience. 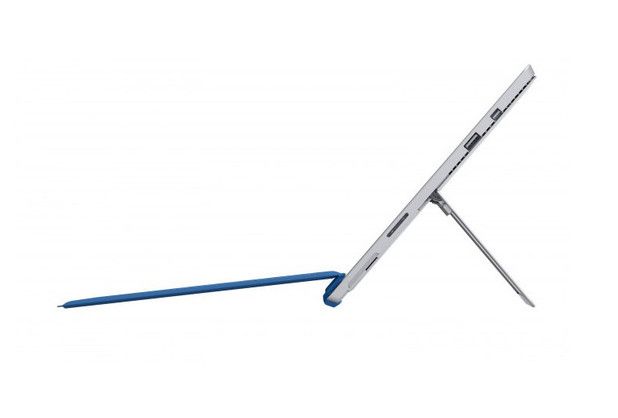 Microsoft has showed the world it can do hardware, the Surface Pro 3 living proof. But, even in its third iteration, the high price seems to defeat what makes tablets such a turn on for consumers. An extra £10.99 for a keyboard really doesn't help matters. Or having to buy Microsoft Office.

If you liked the Surface Pro or Pro 2 and you want to upgrade, you will appreciate the refinement. Those looking to work on the move will appreciate its slim form-factor. Everyone else may wonder if spending £600 on an admittedly great tablet is the best idea. Unless you are used to Apple Mac prices, in which case it will seem cheap on a spec-for-spec basis.

The Surface Pro 3 represents a device that has come of age and, if it really is Microsoft's last attempt at hardware, it will be remembered even more fondly. Still, a niche product is a niche product and so not everyone will understand why Microsoft tried to kill two birds with one stone.

Great review, I have the original surface pro 128 with all the goodies and still love it! I just wish the app store want so anemic.
G

Staff member
It's a bit too buggy right now to be a hit. Sorry. Its got potential but its lacking maturity. Make sure you're syncing your files daily for backup, you will need it. MS could stabilize this in six months or not we shall see. In the meantime there will be lots of updates and you will be told to "Refresh" frequently. Then they will have to refresh the recovery partition because it wont be able to make it thru all the updates that have to be applied. NFR.
D

"The Microsoft Surface Pro 3 is the third and perhaps final Microsoft-built tablet."

I'm curious what makes them think this could possibly be the end of the line.

I'm fairly certain that statement is bogus assumption. You know what they say about people who assume.

It seems sort of pointless to write a review if you're calling the patient dead on arrival.
Last edited: Aug 18, 2014
You must log in or register to reply here.

Windows 10 on the Surface Pro 3: Now the 2-in-1 makes perfect sense

Microsoft Surface 3 is no "Pro," but still runs full Windows