Staff member
Interesting article/forecast of Tablet sales and also interesting position of Surface in the market.
ZDNET Tablet shipments will fall by 15 percent this year but Surface Pros are leading the move to bigger screens | ZDNet

Getting right to it... this table has the numbers.

TrendForce is predicting that shipments of tablets will fall by 14.9 percent this year to 163 million units, as once-popular 7-inch mini-tablets are displaced by 6-inch smartphones or phablets. But it's not all bad news. TrendForce is also predicting that shipments of large tablets such as Microsoft's Surface Pro range and Apple's forthcoming 12.9-inch iPad Pro will grow as usage extends from entertainment to business, from content consumption to creation. 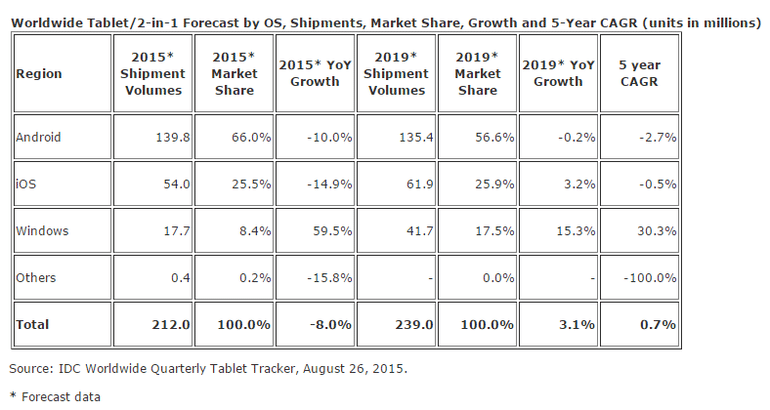 IDC also said that Windows' market share grew by 59.5 percent to 17.7 million units. It added: "IDC expects the share of larger screen (>10") tablets and 2-in-1's will grow from 18.6 percent in 2014 to 39.5 percent in 2019, fuelled by the impact of phablets and a growing commercial appetite for productivity solutions."

US-based Strategy Analytics also picked up the trend with "11-inch and greater segment to nearly triple in 2015, led by Surface Pro 3".


I seem to recall predictions of Windows Phone sales with much better numbers than we have so keep in mind a prediction is just that and may not happen.

I would love to see this kind of success for Surface devices but what has to happen for it to become a reality?

I wonder what percentage of the Lenovo, Asus, other and white brand tablets use Windows?
H

Staff member
Looks like MS are looking better and better then. Forgive me if I don't take an analysts predictions seriously for a second though.

Just last week I ran into a constriction company here in the Atlanta area and they are getting SP3s for ALL the office staff. I'm seeing more and more of that.
You must log in or register to reply here.

Consumers fall out of love with tablets, but now businesses are smitten instead