Time for an N-trig software update - make yourself heard!

Posted this on Reddit already - re-posting here in order to get as many people as possible involved.

I think it's been quite a while since we've had any updates to the N-trig digitizer software - both to the regular driver and the WinTab driver. With the regular driver, we get jitter when attempting to draw slower, more precise strokes. I know non-artists are not particularly bothered by this one point, but from what I've seen, there are enough people that do care.

Second, the WinTab driver needs addressing since at least one major creative application, Autodesk's SketchBook Pro 2015 suffers from loss of pressure sensitivity when this driver is installed and from lack of touch control when this driver is absent.

Third, a control panel of some kind is sorely needed to adjust the pen's pressure curve per user preference and, less importantly, to allow re-mapping of the pen's buttons per application. Without the pressure curve adjustment many people, myself included, report having to use too much pressure while sketching/drawing (in apps other than OneNote) and also not having every stroke register (particularly the beginning of strokes). This last issue happens even in OneNote and I would guess that a slight change in the pressure curve used could correct the problem.

I urge anyone who finds these issues to be important, to go to N-trig's support page and submit a report asking for status or feedback. I did my part just before posting here. Note that the submission form only seems to work from Internet Explorer (in Firefox, the submit button does nothing - not sure about Chrome).

Staff member
Wouldn't be more helpful to get the ISVs to move to the Windows Ink API like Adobe has moved to? This removes the WinTab problems.....
OP
A

They will move, I'm sure. For now, though, the WinTab driver is needed for some apps and, if it is supposed to work, it should work properly.

Staff member
My understanding is that Adobe and N-Trig funding and co-developed the WinTab driver and it was designed to improve functionality on legacy Adobe Products, now that Adobe moved to the Windows Ink API and the current implementation was created by Microsoft, N-Trig and Adobe I'm not sure who will fund further development...
OP
A

Well, Autodesk might have some spare change given they have a stake in pen enabled tablets through their SketchBook line of products - or maybe with Service Pack 4 of SketchBook they'll move to the Ink API.
I

I remember someone posting OneNote of SP2 and SP3 handwriting in another forum. He asked if anyone could tell the difference. Most people, myself included said they could see no difference. He then said look closer and I did. There were differences especially at the point where the pen is applied and lifted. The SP2 is capable of reading very subtle differences in pressure but importantly it responds like a real pen. It means the line width doesn't vary widely over the pressure range of typical handwriting but pressing harder will make the line heavier. Importantly you can see where the pen has registered lifting the pen from the surface, nothing gets lost in other words. It also has a nice feel to it.

I got the SP3 myself after that and came to the same conclusion. It seems few people on the forum agree with me but I felt the handwriting was a nicer experience on the SP2.

The other issue is palm rejection which is also better on the SP2, possibly due to the EMR layer in the screen or simply the extra cm or so it detects the pen above the surface of the screen.

I also found a few times where the SP3 pen simply refused to write but a minute later it would be fine.

I went back to the SP2, which is a pretty solid experience. I don't wonder when I pull the pen out if I'm going to have issues. Very occasionally palm rejection won't quite work and I have a lot of pages open all the time but issues are infrequent.

I'm not saying that the SP3 is bad or not manageable but I think it is a two steps forward and one back or vice versa depending on your point of view compared to the SP2.

Another simpler issue is I can carry the SP2 like a book with the pen attached with me for appointments which just works. I think they need to find a place to stow the pen on the SP3. I got around it by having a case with a flap I clipped the pen to.

The SP3 is not designed for artists. As an artist, I think the Cintiq Companion would be a far better choice. 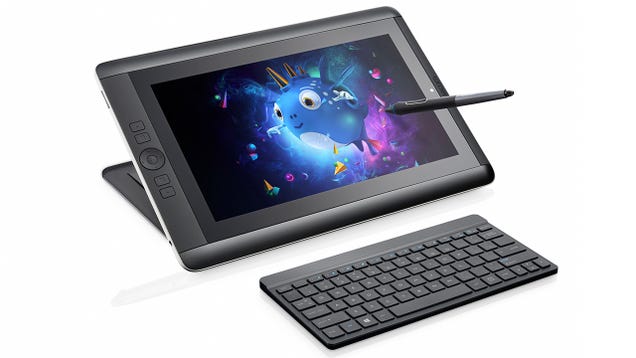 The Cintiq is way overpriced and is too heavy. A co-worker has one and stopped using it outside his home because it's too heavy to lug around. Has terrible battery life and a huge power brick. The SP3 would be perfect for artists if they only had a control panel similar to Wacom's. It's only software, the hardware is all there.
OP
A

I think the Surface Pro 3 could be great for most artists and is already very good for a significant number if their drawing style involves quick strokes where jitter is not very apparent. Of course it is possible jitter at slow drawing speeds might be inherent in N-trig's technology. I remember having a Calcomp tablet during the 90's which had a problem with waviness in diagonal lines too.

My take is that the jitter problem comes from having a rather sparse grid while using a too-simple sampling algorithm, or at least not varying the algorithm based on pen velocity. What could possibly mitigate the problem is the use of a tangential (where the tangent is calculated based on the previous n samples) weight to counter the "pull" of grid intersections that are off tangent, when drawing at slow speeds. This would only need to be applied at low velocities to save on computational cost. At higher speeds, a straightforward averaging of samples takes care of jitter, as observed in the current implementation.

I'm sorry that I don't remember the details, but I read an interesting article in the last couple of years regarding digitizers and getting straight lines out of them. There are some known limitations because of the way that all of the components work and interact with each other, so there may or may not be a fix for that particular issue.

My son and husband both have the Cintiq and both love it. Yes it is quite heavy by comparison, but it's a far better drawing experience. My husband has tried both the Cintiq and this Surface Pro. The Cintiq is Wacom and has over 2000 levels of pressure sensitivity and is constructed with artists in mind. I asked my husband, who is an artist in the games industry, if the 2000 levels made a noticeable difference and he said definitely in something like an airbrush where 200 levels, such as the SP3 has, doesn't make for fluid strokes and it kind of steps between pressure levels. Don't get me wrong, I love my SP3 but I think the Cintiq companion makes a better dedicated art tablet, because that's what it's made for. But it is heavy and it is waaaay expensive. The SP3 though wins out as a better laptop and tablet for most other uses.
I

I agree the Surface is an all rounder but I think that the SP3 has regressed in respect to the pen having gone from 1024 levels down to 256 levels.

I don't see why the Surface shouldn't have progressed in this respect and increased the number of pressure levels (for instance).

The SP3 goal wasn't, obviously to improve the pen and inking so much as making the screen consume less power, cost less to make and thinner.

There are other issues too with the pen including requiring two sets of batteries, complexity and a reduced range before palm rejection and other functions operate.

I think inking will become more of an important item to consumers of technology and hopefully that will drive progress forward and not backwards as has happened here in pursuit of other design goals.
You must log in or register to reply here.