Thanks! Time to copy the contents of the iso to a thumb drive and upgrade to 8.1! Thanks!

Am a MSDN subscriber so also had legit download which I did late Monday. 8.1 Pro DL went ok, but I could not get the bootable Flash drive to boot on my SP 128 (either a 32gb USB 3.0 nor a 16gb USB two). So just did a "save none of my stuff" non-upgrade install on top of a straight 8.0 Pro install. Worked fine and used Disk Cleanup to get rid of "Windows.old". After loading the usual Windows suspects, including Office 365 and Visual Studio, then adding Vipre and Diskeeper, I still have 90+ GB left for use. Add to that my 64GB SDXC where I save all my stuff, and the SP is doing just fine with 8.1. I had used the two 8.1 preview programs this summer for about a month each, but had issues with the drivers, especially the Marvel 350n network adapter driver - which is why I had gone back to 8.0 Pro whose drivers did not act up so much. Things went well until this AM. I like 8.1 and the smaller tile capacity, start button and the solid, professional feel to the OS. But I play only one game, SpellIt, and it messed up the network drivers in the preview versions and now it seems to be doing the same this to the RTM. So once again I have to uninstall Spellit until we can figure out what's what. Ah well, Spellit works on my WP8 Nokia 920 so I won't miss my turns at getting clobbered. Maybe I will have to wait until the SP 2 comes on the scene, but gotta convince the house treasurer that it will be money well spent and that's without telling her that she is getting my 920 and the SP128 so I can also get a Nokia 1520 phablet AND the SP2. Hand me downs are not so exciting to her.
S

So what did you do relative to the CD key? The CD key from the Windows Pro install on my Surface Pro was not accepted so I used one generated from Technet. I understand that I can revert back to the OEM CD key after. Did you do that or just keep the 8.1 CD key from MSDN?

I am considering upgrading my Samsung NP870Z5E notebook I have but it has the non-Pro version of Windows 8. I know that the ISO is a multiple edition ISO but it appears that I will need to install Pro as the upgrade when I don't really need it and would be happy to reactivate as the non-pro version after the fact. Any ideas how install the non-Pro Windows 8.1 from the ISO when the key is for Pro?

Thanks again for the positive description of your experience!
C

1. Loaded Windows 8.1 onto a bootable USB flash drive. The Surface Pro Windows 8 key did not work, so found a trial key to do the Upgrade option. After the Upgrade process completed, then I swapped it back to the Surface Pro key and it activated with Microsoft - no problems.

2. My Stardock Start8 (restores the original Windows button) stopped worked, but that was fixed by updating it.

3. The Pen/Stylus functionality completely stopped working after the Upgrade. But that was fixed by installing the latest Tablet PC drivers from the Wacom USA website (the drivers have now been moved into Legacy Drivers).

4. Battery life of the Surface Pro has increased by approx 17 minutes.

5. Symantec Endpoint Protection runs properly in most part after Upgrade, but the status indicates that the Firewall component is malfunctioning. No later version of SEP is currently available. If you are not using their enterprise-grade software, then I believe their latest version of Norton 360 already supports Windows 8.1.

7. Google Chrome browser no longer detects touches on the webpage properly. This may be something to do with Chrome not supporting the new Windows UI scaling. For example, tapping a hyperlink may trigger a click on a nearby HTML element instead. In a nutshell, Chrome is not useable with touch on Windows 8.1. Firefox is fine.
S

Upgrade went painlessly and everything is working great!

I'm liking that I can snap two apps on my right screen and then work in desktop mode on my main screen.
U

So far, it unusally uninstalled my drivers and Office 2013. smooth, indeed

But now for the real reason why I registered. So earlier IconPackager messed up my system and I wasn't willing to do a refresh so I did an upgrade (keep everything) install. Alas, the Surface seemed to deactivate itself and now I'm left unactivated. The jellybean key finder doesn't work and the screenshot of the "serial number" of my vanilla installation from Speccy (yeah I don't know if it should be trusted) keeps on getting rejected. Even the Tokens Manager backup program says nothing! As of now, I am panicking since I don't know if the recovery partition with Windows 8 is still there (never touched it) and if I can update this with the original key. Grr.

uzernamezz said:
But now for the real reason why I registered.
Click to expand...

Hard to follow this without a program, so let's start from the beginning: What kind of machine? Is it a desktop or Surface Pro?

I have done three desktops so far, and in each case, it required Re-Activation, but it activated with the previous ID#. Do you have the Product ID# of the installation that was running previously? The only thing I lost in those three upgrades was the Chinese Language Pack on one of the machines, but it warned me in advance that it would need to be re-installed.

If it is a Surface Pro, the recovery partition should still be there unless you intentionally removed it. If so, you will need to download the Pro Recovery set and recover it from a USB drive.

What is your status now? Does the machine boot?

@Russ. Tis' a Pro 128GB. If a screenshot of Speccy counts, well, technically yes but it refuses to activate.

I checked the hard disk manager and it says 7.45GB free along with 2 sub 500-ish MB recovery partitions too.

It boots, just with the activate Windows screen there.

---EDIT---
The alarms app seems to have no sounds and explorer crashes. Brightness is always max at every boot, but I think this has something to do with drivers.
Last edited: Sep 14, 2013

The keyboard works perfectly on this forum now. yay.
U

Okay, so I managed to snag a legit 8 key from my friend. I clean reinstalled 8 and jumped to 8.1 and this is what I notice so far...
1. COM Surrogate crashes when I open a photo in Photo Viewer. The Photos app works just fine. I think it has something to do with the latest Intel drivers. The control panel of the graphics seems to crash all the time. (9.18.10.3257)
2. After a reboot I saw this program that had something to do with WEI crash. Never noticed it after.
3. Camera has an exposure problem. Everything is too dark (see picture 1, taken in a brightly lit room, this is both front and rear camera.) 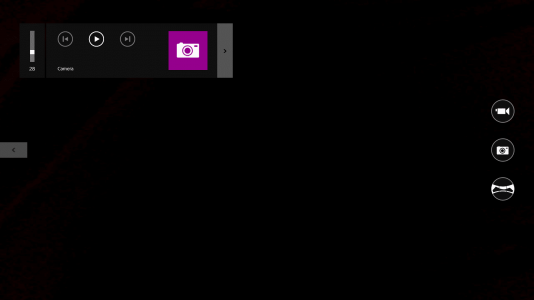 4. Trackpad Settings app does not detect the touch cover, even if it works fine. Nothing in Device Manager about the touch cover too. (Annoyed by the fact I can't disable the touchpad for now) 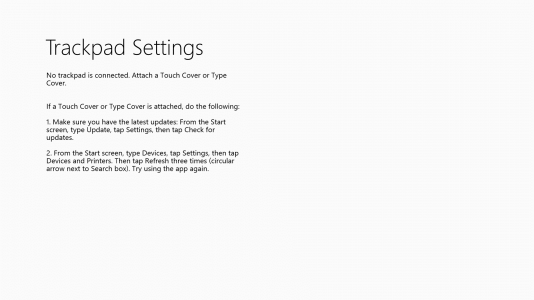 5. Some apps have a problem launching/installing, such as iTunes giving an error about "Apple Mobile Device" service can't be started, thus only leaving to abort the install, and Vegas Pro getting stuck on the creating windows screen.

Ruffles said:
I don't understand. You say your satisfied - i.e. you like it but you don't know if you want it on your Surface? Why not?
Click to expand...

I think what he is saying is this: I put it on my home PC because who uses a home PC anymore, but before I put it on my Surface Pro, the device I live by, can anyone give me their experience as I don't want to kill my productivity tool with some beta release from wonky Microsoft. It all seems pretty clear and fair to me.
You must log in or register to reply here.