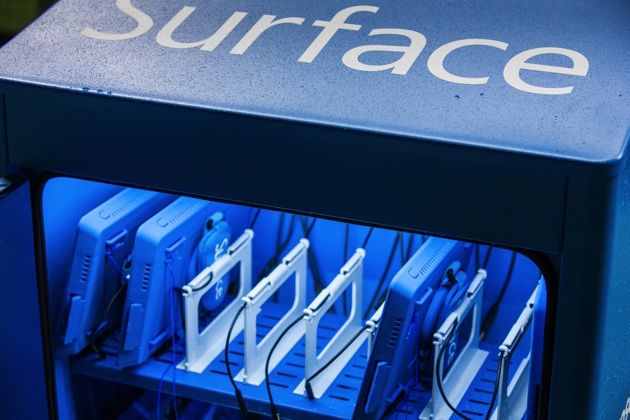 Last night's Hall of Fame game was the first NFL preseason matchup of the summer. It was also the first time that Microsoft's new plan to replace binders of printed photos with a fleet of Surface Pros on the sidelines was put into effect. As you might expect, implementing the tech hit a few snags. The so-called Sideline Viewing System provides images for examining pre- and post-snap formations by the opposing team between series, but the option wasn't in the lineup at kickoff for Buffalo Bills head coach Doug Marrone. "I was told mine was going to work, and mine didn't work," Marrone said in a post-game interview. After remedying the issue, the coach was able to leverage the system during the second half, adding "I like it a lot." Just like teams are ironing out on-field issues in the scrimmages leading up to week one, the new Surface system will need that time to smooth out kinks of its own.

The NFL has permitted teams to use Microsoft tablet computers during games this season, primarily for studying pictures taken before and after the snap.

However, Bills coach Doug Marrone was apparently without use of a tablet for at least some of Sunday’s Hall of Fame Game.

After the Bills’ 17-13 loss to the Giants, Marrone indicated his tablet wasn’t operating in the first two quarters, per ESPN’s Mike Rodak.

“I was told mine was going to work, and mine didn’t work,” Marrone said afterwards, according to audio from WGR 550 AM in Buffalo. “They said they would get it right, and it was miscommunication. But I was excited. I did use it in the second half, and I like it a lot,” Marrone said.

With the regular season still a little more than a month away, the NFL, clubs and Microsoft have time to ensure all goes smoothly with the tablets once the regular season begins. Having four weeks of exhibition games for practice runs should aid that process.

Well, it is the Bills.
You must log in or register to reply here.

The NFL Plans to Use the Microsoft Surface on the Sidelines

M
Are These the First Images of an “Andromeda OS” Folding Surface Tablet Game?