CONFIRMED: Microsoft is building a successor to the Surface 2 (RT), here are the first details


WinBeta has learned that Microsoft is planning to launch a successor to the Surface 2 soon, however it won’t be a Windows RT based device. The device will be fanless and sport a low spec'd CPU, being either an Intel ATOM or Intel Core M based processor (we’re not too sure which one they’ve opted for just yet), meaning it will run a full-version of Windows. This is a first for the non-pro Surface line-up, and further solidifies reports regarding the death of Windows RT.​
We expect Microsoft to announce this device sometime before/at BUILD, and will launch soon after, meaning the device will come pre-loaded with Windows 8.1. Of course, the device will be upgradable to Windows 10 when it officially launches, so early buyers need not be worried. We understand that Microsoft will market this new Surface as a non-pro device.​

I do believe they need a device in a lower price range and "minis" seem to be an endangered species right now but there's no mention of size other than that possibly implied by Surface 2 successor.

This article is more speculative, but comes to similar conclusions:

Where have you been since Dec. in the past it has meant RT.
A

I meant, with the death of RT, what will non-pro mean?

A lower priced Surface with an Atom and/or Core M processor.

For the love of all that is righteous, I hope they call it something besides "Surface". Or if they stay with the name, then I hope it's something VERY distinct and descriptive, like "Surface Light" or something. Most people had no clue what RT was, and how it was different from Pro.
OP
G

Staff member
On the Fool, I read an article yesterday that said this new tablet would be outfitted with a new Cherry Trail Atom x5/x7 CPU and not the Core-M. Also thought it was likely to include the Intel LTE 4G.
http://www.fool.com/investing/gener...-we-know-about-the-next-microsoft-surfac.aspx

Some BayTrail CPUs were comparable to the Tegra 4 in the Surface 2 so this *should* be an upgrade in performance if the right SoC is used (although not the Tegra X1 Teraflop beast I was hoping for) but the downside of full windows vs RT will likely be apparent. I'm thinking I'll need to build an Application Whitelist as a security measure to keep out the unwanted. Then there's the issue of random configuration glitches which plague Full Windows and had escaped RT. It may be time to mount a full frontal assault on that issue.
OP
G

Staff member
OFFICIALLY official
Seen and touched and appeared on MS Blog. WITH A PEN.
http://www.zdnet.com/article/microsofts-new-atom-based-surface-3-starting-at-499-to-hit-in-may/


The new Surface 3 is a 64-bit Intel Atom x7 (Cherry Trail)-based tablet that's the new little sister to Microsoft's flagship Surface Pro 3. A Surface 3 tablet with 2 GB of RAM and 64 GB of storage, minus the add-on keyboard, starts at $499. It ships with Windows 8.1​
The Surface 3 will begin shipping on May 5 through a variety of retailers and resellers in 26 markets worldwide.​
The Surface 3 has a 10.8-inch 1920 X 1280 ClearType HD display with a 3:2 aspect ratio. There will be both a WiFi-only and a 4G LTE-ready version

New with Surface 3 is a Micro USB charger

You can also use the Surface 3 Docking Station to instantly create a full desktop workstation, connecting easily to an HD monitor, a printer, an external mouse and keyboard, or any of a huge range of peripherals

Surface 3 supports the same pen experience as Surface Pro 3, including 256 levels of pressure sensitivity for accuracy and detail. In the case of Surface 3, the pen will be sold separately and it will now be available in colors — silver, blue, red and black.

Pre-order is available starting today through Microsoft Stores, microsoftstore.com and select retailers, and it will be on sale beginning May 5
​
Cool Man
Last edited: Mar 31, 2015
OP
G 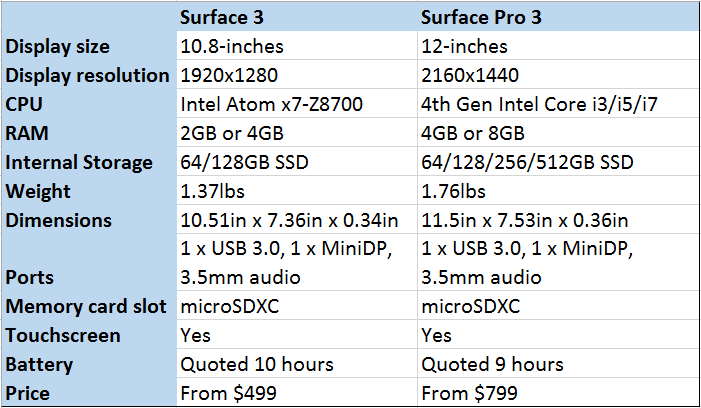 Micro USB charging port vs magnetic connector on SP3 OR other Surfaces.
Panny said this was the #one customer request but I think they misunderstood. This is a mistake, customers may have wanted an option to charge with USB but actually connecting a micro USB sucks and making it the only way to charge is not an improvement over the easy to connect proprietary charger.
You must log in or register to reply here.

Microsoft Surface 3 is no "Pro," but still runs full Windows