Summary: Are you going to buy a Windows 8 tablet or smart phone? It will be interesting to see who bites first on the coming wave, you or your employer. 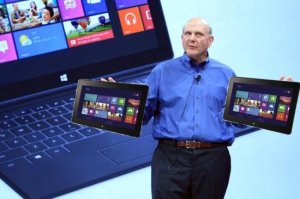 Why do I feel like Windows 8 is going to push tablet computing into the mainstream including corporate computing in such a big way?

First, Microsoft has many Enterprise-level partner agreements with its customers. That means that Microsoft's own tablet will be available in bulk for those customers, preloaded with Windows 8 that's ready for corporate work. You're looking at millions of units just for corporate use.

Second, it's Windows. Windows, like Mac, has its fans. Windows is familiar, it's well known by users, it's a recognizable brand. Everyone uses Windows. Everyone knows Microsoft will be there tomorrow and the day after that. There's comfort in that stability.

Third, people will use at home what they use at work. How many people will buy technology that they also use at work? A lot. Personal computers users want to become more familiar with the workings of their office environments and will therefore purchase accordingly. Similarly, if you use a Mac at work, you're more likely to purchase one for home use. People love consistency. Millions more units.

Fourth, a lot of consumers will buy into Windows 8 tablets because of its more tablet-friendly interface. Large icons and a swipey interface make it easier for people to use on this hardware. Previous Windows versions were mouse-driven. This one begs for a touch screen. And, it's more user friendly than Apple's iOS. Seriously. It's Windows plus you have the intuitive interface that begs to be swiped and touched. Apple's iOS can leave people a little confused. Task switching in iOS is not intuitive.

Finally, Microsoft's support is going to be long-lived. They still support Windows XP. That means that while your (my) iPad 1 is no longer support just two short years after its release, the Windows tablet will likely be supported by Windows 9, Windows 10 and possibly beyond. Think about it. If you purchased a Windows tablet computer in 2001 (Almost exactly 11 years ago to the day), when Windows XP first hit the market, your tablet would still be supported and it's likely that you could upgrade it to Windows 7 or even Windows 8 with no issues. In fact, it might run better with Windows 8 on it. So, for my $600, I could have a device that's supported for 10+ years instead of two. That's an easy decision for me to make.

And, since Windows is such a versatile platform and uses standard hardware, it's likely that you can run virtual machines on it with a Type 2 Hypervisor or dual boot it with Linux. You aren't limited to a single OS nor are you limited to a single function computer/game system that may well be obsoleted by its manufacturer in two years.*
The best of all worlds indeed.

I've used Windows 8 for a while now with no issues. It works well with all of my services, programs and idiosyncrasies. I haven't had a moment of trouble with it. Honestly.

It's almost as if Microsoft thought about the past and decided not to repeat its mistakes. They put real thought into the next generation of computing and what users really need to operate, to communicate and to transition seamlessly from home to work and back again.

If you've followed my column for long, you know that I didn't buy an Android tablet and I reluctantly purchased an Apple iPad 1 (mistake) but I'm looking forward to my brand new Windows tablet with Windows 8 on it. Yes, I am. I'm going to buy one and I'm going to love it.

What about you? Are you going to buy a Windows 8 tablet or opt for a different one? Would your employer's choice make a difference to you? Talk back and let me know.

I haven't had a chance yet to try out Windows 8. I always worry about how well new operating systems work with old programs. I'm glad to hear that you haven't had any trouble with it.
You must log in or register to reply here.

How to decide: Should you upgrade to Windows 10?

Windows 10 on the Surface Pro 3: Now the 2-in-1 makes perfect sense