Microsoft CEO Steve Ballmer has admitted that the company built too many Surface tablets, and it's not selling as many Windows devices as it wants. During an internal town hall event earlier this week, Ballmer and COO Kevin Turner both addressed the recent $900 million hit for Surface RT and the sales pace of Windows across various devices. According to several sources, Ballmer openly discussed Microsoft's focus on securing Instagram for Windows Phone, and its plans for the next-generation Surface. Neowin first reported parts of the meeting.

"We built a few more devices than we could sell," admitted Ballmer when referring to the slow Surface RT sales. Microsoft recently cut the price of its Surface RT tablets by 30 percent worldwide, and Ballmer and Turner reiterated in the internal meeting that the huge writedown was a price adjustment that was necessary to sell Surface RT devices. While Ballmer didn't provide a sneak peek at the next Surface, we're told he confirmed new devices are currently being tested with incremental improvements. We understand Microsoft has been testing Surface devices with the new Qualcomm Snapdragon 800 processor.

"WE'RE NOT SELLING AS MANY WINDOWS DEVICES AS WE WANT TO."

Ballmer also briefly discussed the performance of Windows. "We're not selling as many Windows devices as we want to," he said, referring to phones, tablets, and PCs. A lack of devices in retail stores hasn't helped Windows 8's initial prospects, and Microsoft is now focusing on the back to school period and the holiday season to ensure Windows 8 and Windows 8.1 devices are readily available. Microsoft recently teamed up with Best Buy to open special Windows Stores in over 500 locations.

The Verge reached out to Microsoft for comment on Ballmer's internal town hall, but a spokesperson refused to discuss the meeting.

Thanks. Interesting on two counts - (1) Statement of the obvious. Who in the devil's name would over produce a brand new product? Much better underproduce - like what Google did - and use the time-delay to build the hype. MS failed spectacularly on that count. Oh...and did I forget to mention the upscale prices that MS started off with? I think there was a lack of realism doing rounds of the MS offices when this was being planned; (2) If indeed Ballmer said "WE'RE NOT SELLING AS MANY WINDOWS DEVICES AS WE WANT TO", I note the distinction between "devices" and "licenses" - the two are not the same. In other words, what he is echoing is the pain (and perhaps frustration) of MS's OEM partners.

Just hope they don't give up on it. My RT is the best device I've ever owned or used. The price could have been lower, but I'm not complaining, I got what I wanted. I think a lot of people do depend on being able to access the internet through 4g connections (not important to me) and a lot of people want a GPS (I'd like a GPS, but there is one on my phone anyway). I'm beyond satisfied with my RT.

I also love my RT. The only people the moan about them seem to be people that don't own one. I know a few people that have bought one and they all are very satisfied with there purchase.

DarthBurrito said:
All he needed to say was "opps" and then get on to business. Poor guy gets ripped for saying something, he also gets ripped for not saying anything.
Click to expand...

Dude, he lost $900 million dollars with what was supposed to be "the next big thing". You don't get away with an "oops" for that. He should be lucky he still has a job. Saying Ballmer fumbled the rollout of Windows 8 and Surface would be the understatement of the century. His goal should be greatness but instead he is trying just not to suck.

That and he needs a tongue scraper... 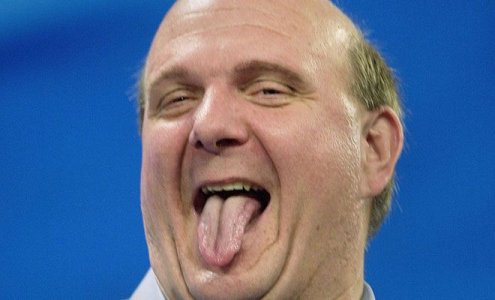 I just don't see the point of people continuously harping over it. Let's get pass it, fix the issue, and continue with business.

By the way, that pic is so overused. Find a new one.

brocharlieb said:
The price could have been lower, but I'm not complaining, I got what I wanted
Click to expand...

It is now!
You must log in or register to reply here.