I have a 1 TB Surface Pro 4 and Surface Book (with Performance Base). My problem is, text on these devices are blurry.

First off, I don't use my screen in large fonts mode. I installed the standard Intel driver for the "GPU" so I could create a custom resolution of 1152x768 (Pro 4) or 1280x800 (Book). This works really well, as Windows is plain ugly with large fonts.

In previous Surface generations, this did not cause any display issues at all. I've been on every version faithfully since the original Pro, and including the Pro 2, Pro 3, etc.

However, in this generation, I have been unable to solve a very irritating issue of Blurry Text.

Now, this issue happens only with *some* apps, and is more pronounced as you approach the corners of the screen. For example:

1) Windows File Explorer - File menu. Totally blurry. Right-click on the middle of the File Explorer, and the context menu is crystal clear.

2) Outlook 2016 - in-line email preview. Quite blurry. When scrolling with finger, crystal clear! The moment I let my finger go, or pause scrolling with my finger still on display; gets blurry again.

3) Generally, the ribbon UI on all system apps (including Paint) is affected.

4) Most non-system and non-office apps are *not* affected.

I've searched on the Internet for issues similar to mine - if anything, people are reporting the exact opposite. The issue happens when they are docked on their secondary monitors and such. For me, I get a crystal clear view on my built-in display while docked. The moment I yank the docking cable, the screen blacks out, then comes back again - with the blurriness problems as described earlier.

I've tried high DPI fixes, various cleartype settings - all to no avail. This is getting to the point where it is now hurting my vision.

It is not a device-related issue, as I have sent back a Pro 4 for repair (due to a battery bulge problem) and got it replaced. Same issue on the new device.

I am waiting for my Pro 2017 but I'm not counting on it that they've solved this issue they introduced with the Pro 4 generation.

Has anybody run into this? Know of any way to fix the issue?
OP
M

By the way, my attempts to capture screenshots of the issue don't work.

Then I press PrtScn, paste into Paint, and both of the File menu blue regions appear identical, pixel-for-pixel!!!
OP
M

Staff member
How is your monitor connected? DVI, VGA, DP or HDMI? Which converter are you using? I've found unless I use an active converter for VGA or DVI I get blurry text as you describe. DP or HDMI seems to work without issue.
OP
M

The external monitor is crystal clear.

Staff member
Sorry I misread - you will see that unless the Surface is the primary monitor or your external monitor has the same 3:2 resolution. As the SP4 screen needs to downscale in duplicate mode (by turning off pixels which leads to the fuzzy text).
OP
M

Maybe you misread again? I am seeing it when Surface is the only monitor. I am not seeing it when an external display is duplicating. Do you follow? I want the display to be non-fuzzy like it was on the SP3.

mimarsinan said:
Maybe you misread again? I am seeing it when Surface is the only monitor. I am not seeing it when an external display is duplicating. Do you follow? I want the display to be non-fuzzy like it was on the SP3.
Click to expand...

You're running non-native resolutions you are going to get blurry fonts....
OP
M

Not that kind of lcd blurries. This is an aggressive, another kind of degenerative blurriness; one whic does not happen in all apps, or not at all in SP3 with same lcd resolution and OS image. Or when attached to external display in duplicate mode!

I always see the blurriness running less than native resolution. Can you take a hi-rez photo and post? SP4 and later used a higher res screen and different panel.
OP
M

Yes, there's two different kinds of blurriness - one is completely acceptable (the panel scaling), and the other completely fuzzy and buggy - as evidenced by the fact that it only happens when an external display is not attached and duplicated to. Its the same internal panel, after all, which displays just fine in the latter scenario.

Do you know if this issue has been solved in the Pro 2017? My order arrives next week. 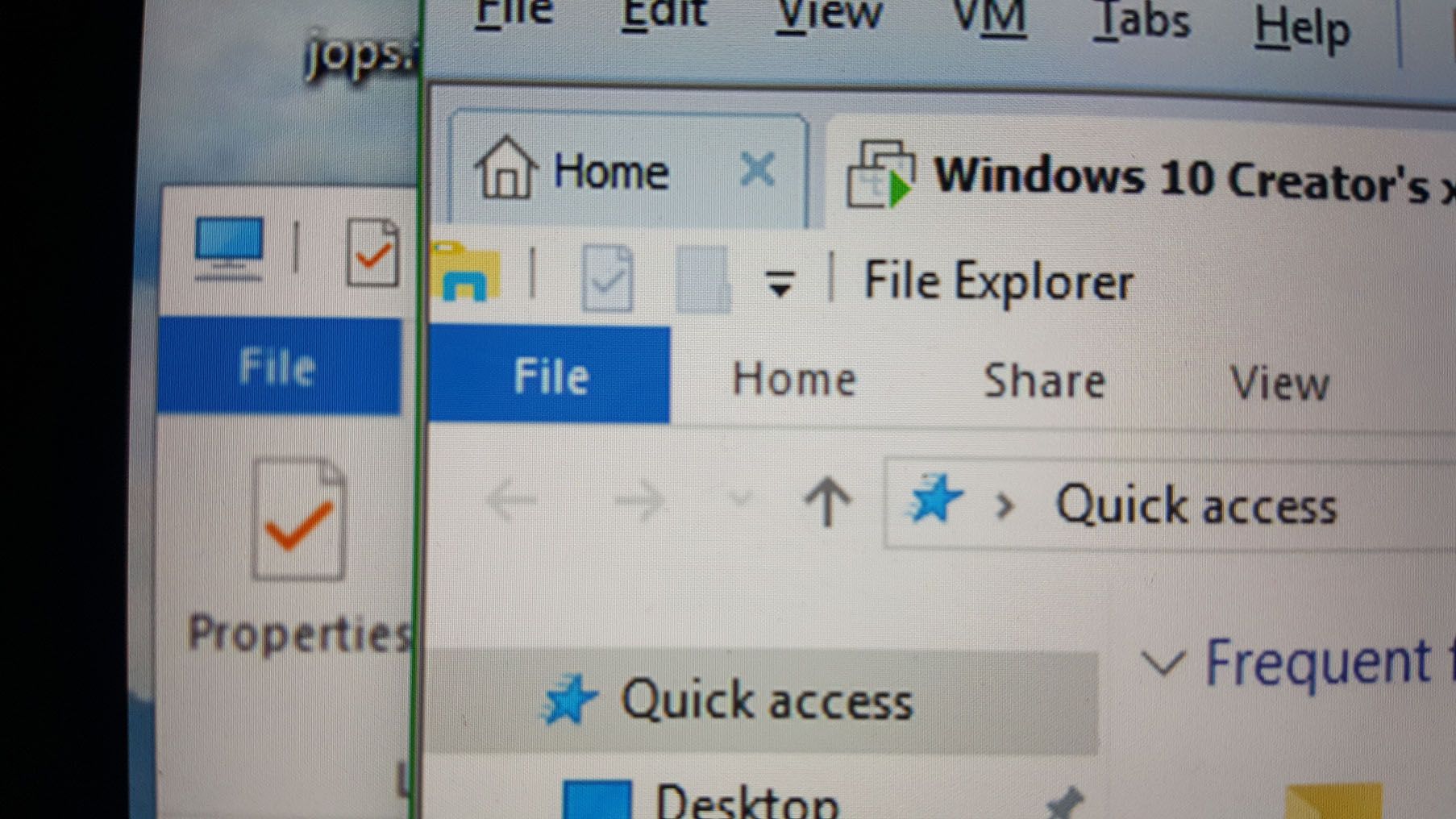 Notice how even the text Properties below the File menu is blurry in the native OS. Inside VMware, the File menu is crisp - on the same screen and at the same time. The same for the VMware menu, which is displayed in the host OS, and not affected by the blurring as it is not a system app.

Here's the crisp version, when connected to an external monitor in duplicate mode. The image is still taken from the *Surface Pro 4* panel: 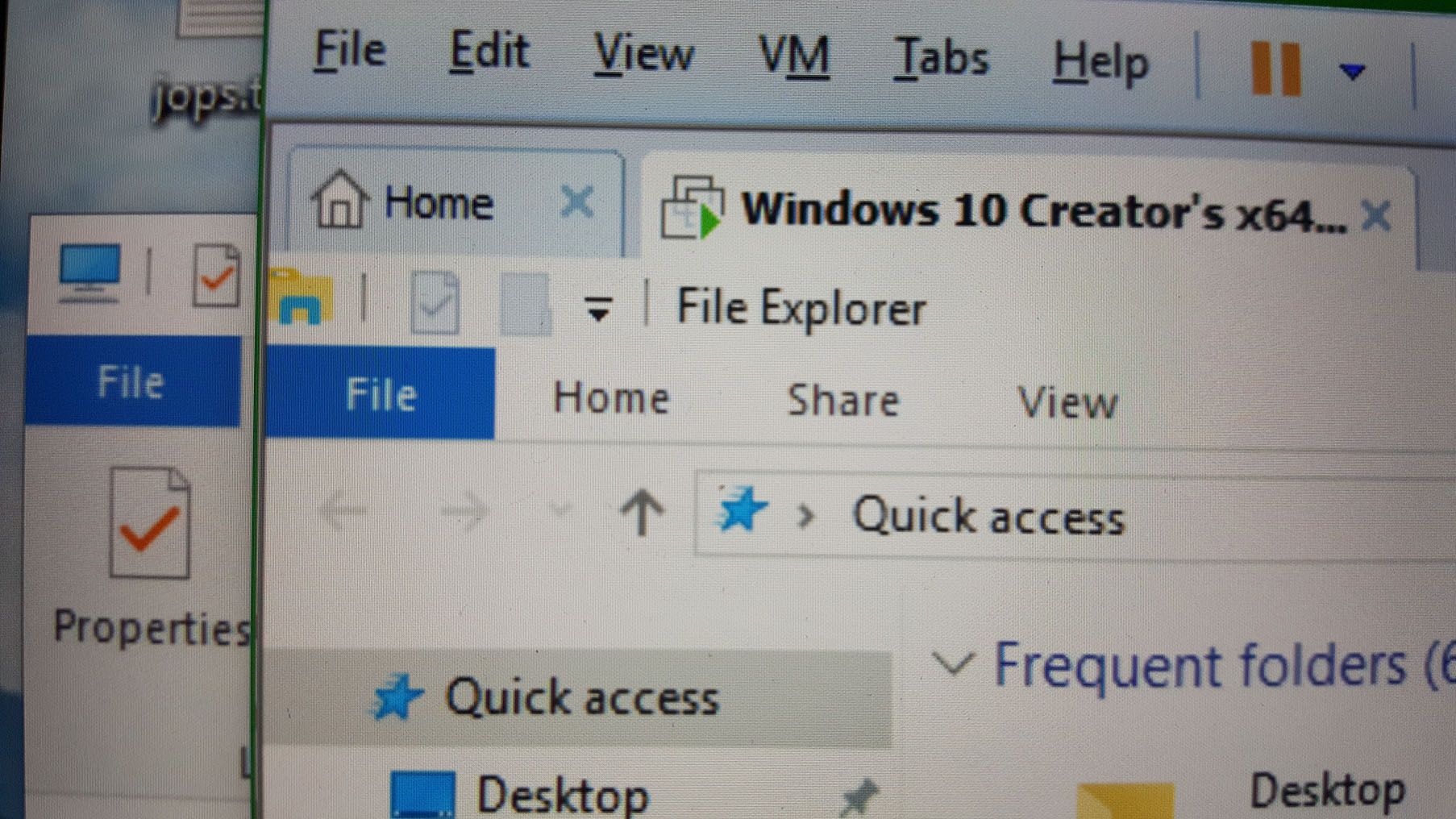 Now, both the File menu, and the Properties button, are as crisp as could be at the reduced resolution - which is what I wish to achieve when I am using the SP4 undocked.

I did not take images on the Surface Book, but it is exactly the same behavior.
OP
M

my surface pro screen is blurry