The folks over at IGN have been making the rounds at CES this week. Today they shared a hands-on article talking about the new Razer's Edge Windows 8 Gaming Tablet. This tablet is supposedly the world's most powerful gaming tablet, and with specs like a Core i5 or i7 processor, Nvidia's GT 640M LE, and up to 8GB of RAM, it likely lives up to that hype. Here's a quote with quite a few of the juicy details, but be sure to continue reading their full article at the source link below,

Today at CES, we got an opportunity to take a first look at Razer's new Windows 8 gaming tablet, the Edge, which they're calling the "most powerful tablet in the world." With Intel Core i5 and i7 processors, Nvidia's GT 640M LE, and up to 8GB of RAM, it isn't an overstatement. The company is demoing games like Dishonored, Dirt: Showdown, Civilization V, and Rift running at medium-to-high settings in each of the tablet's four core modes — tablet, PC, console, and handheld. The variation really stems from how the tablet is paired with an array of optional accessories the company has produced, such as a docking station, side-mounted controllers, and a transforming keyboard.

Each mode is meant to demonstrate the device's versatility and performance for any play style and game genre. The tablet mode is being shown with Civilization V, a touchscreen-optimized title, while Dirt: Showdown is used to show how the tablet can handle split-screen games output to an HDTV via HDMI. For more MMO-focused experiences, the company is using an add-on keyboard and Bluetooth mouse. And finally, to replicate the gamepad control scheme, the side-mounted controller cradle running Dishonored.

In each of the configurations, the Edge delivered great performance. Framerates were smooth and when we took a look at the graphics settings, each of the games were set to baseline or high. It is, in fact, the most powerful tablet on the market. But as we've learned, the Edge's emphasis on performance has come at the cost of battery life and affordability. Razer has quoted the Edge at roughly one hour of battery life when playing games without the aid of a power cord or extended battery and roughly four to six hours for regular use. Razer will be selling an extended battery, which can be housed in each of its add-on accessories for $70, which adds another hour of playtime, bringing it to a maximum of 2 hours of gameplay. And then there's the cost of the accessories themselves. While the Edge Pro comes with the controller add-on bundled in, it'll cost $249.99 on its own, and the keyboard case and docking station will cost $199.99 and $79.99, respectively.

As for the system itself, the baseline Edge, which comes with 4GB of RAM, Intel's Core i5 processor, 64GB of SSD storage, and Nvidia's GT 640M LE chip, and no bundled in accessories has an MSRP of $999. Stepping up to the Edge Pro adds an Intel Core i7 processor, 128GB, 8GB of RAM, and an included controller cradle will cost $1,299, with 256GB of storage adding another $200. Given the quality and power of the hardware, the cost of the Edge is extremely competitive, but when you factor in all of the added accessories and the extended battery, to get the full experience, consumers must shell out more than $1,500.
Click to expand...

Is that really pricey when it comes to gaming rigs though? Different standard really.

No, but more money than I have to spend right now.

That's a crazy price! Out of my league for my needs.

bosamar said:
That's a crazy price! Out of my league for my needs.
Click to expand...

I think they have missed the point of a tablet... 1hr battery life? I purposefully went for the RT as I want my tab to last my whole working day plus a few hours in the evening. Granted I don't think the battery life would be as bad if it wasn't used for games but at the price you could by an RT and a decent gaming rig (or laptop). Still cool to see its possible, just don't think they will sell many....

It really isn't about battery life it is about having the latest and greatest form factor. Gaming laptops never had any battery life to speak of and can't compare to a proper gaming desktop and weigh 3 times as much as a standard laptop but they are still portable so people buy them. If you don't understand what this machine is about then it isn't targeted at you. If you are "hardcore" and have the disposable income then you will get this because it is the "most powerful gaming tablet" and for no other reason. It is all about the latest and greatest and cool factor.

Which does bring up one issue that Arnold pointed out. For a hardcore gamer going for bragging rights and cool factor the style does come into play (gaming rigs are always the coolest designs you can buy) and this doesn't have any style. For comparison just checkout one of Razer's mice. 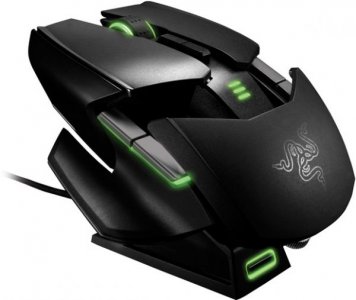 Not a Gamer but interested in getting this contraption.

Looks great but the 640M LE is not that good GPU for todays games, will probably have to use low settings.
F

It's only 1366x766 resolution if I'm not mistaken, so most games should run fine.

I'd rather game on my desktop though, cheaper to build, more comfortable to game on... my life doesn't revolve around gaming so I don't have a purpose for a gaming tablet not to mention a gaming laptop.
You must log in or register to reply here.