How to Play Flash on Microsoft Surface RT Tablet

Apple's iOS doesn't support Flash, something that has helped Android gains a foothold with visitors of sites using the popular video platform. As a Windows-powered device, Microsoft Surface will support Flash. But it's a known issue as Surface will only play Flash from sites that are whitelisted by Microsoft. If you have patience you have to wait till a fully functional app is released via Store. In the mean time you may try this tweak. 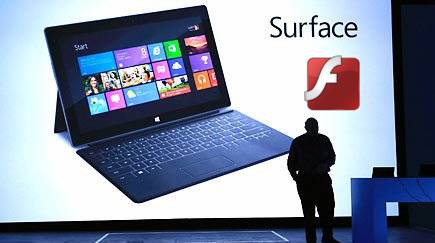 Q: How do I update adobe flash player version on the Microsoft Surface tablet?
A: From looking on the web it appears the Surface RT comes with adobe flash player 11.3 this is the latest version which is compatible with RT. Adobe Flash Player 11.5 is out but there is not yet a compatible install for Surface. Windows update will tell us when a new version comes out. In addition, both IE10 on the Windows desktop and Modern UI IE use the same integrated Flash Player with no need to download or install an additional player. You can read more about it in the article here.

Q: How can I view downloaded flash videos on Microsoft Surface RT/Pro?
If you have already downloaded loads of Flash videos from video sharing websites like YouTube or somewhere else, and intend to play those videos on your Surface tablet, you have to use a flash video converter to do format conversion. The guide below shows the basic steps on how to convert FLV/F4V flash videos to Surface RT/Pro friendly MP4 format.

What you need?
Pavtube Flash video converter - this flash video converter software comes in two versions, one is for Windows platform and the other is for Macintosh platform. With this little gadget, you can easily transcode FLV and F4V Flash videos to Surface tablet preferred MP4 format at fast speed and excellent quality without any audio and video out of sync issues.

How to change FLV/F4V flash videos to a format that is compatible with Microsoft Surface tablet?
The steps: 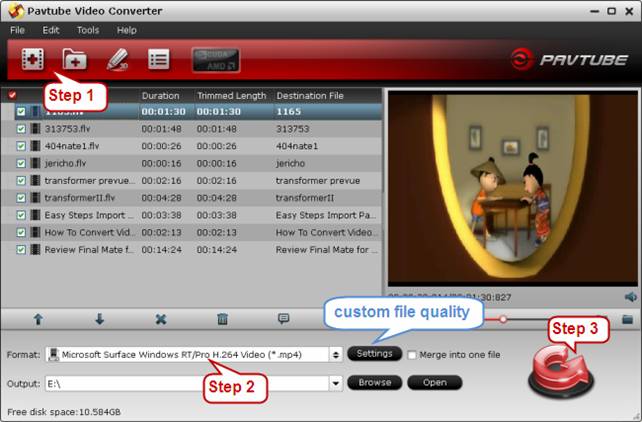 In the mean time, you can click “Settings” button to custom video and audio settings for well playback performance on your Surface tablet. Actually, the default settings can generate files that basically satisfy your general watching needs, so this step is optional.

Step 3 - Convert Flash videos to h.264 MP4 for Surface RT and Pro
Click “Convert” button and the flash video converter will start encoding FLV/F4V flash videos to Surface supported MP4 format immediately. Once the conversion is done, you can click “Open” button to get the generated MP4 files for viewing on Surface.

As you see, now you can effortlessly watch Amazon Instant WMV videos on Microsoft Surface RT tablet and enjoy the show. If your movie isn’t already in one of the supported formats or it’s still on a DVD or Blu-ray, you can get an all-in-1 video covnerter app - 20% OFF dsicount Blu-ray Video Converter Ulitimate (or its Mac Version - 20% OFF discount iMedia Converter Mac) to encode movies to play on your Surface tablet with ease.
OP
P

This article will show you how to get music, movies or TV-shows purchased from iTunes to Microsoft Surface RT for smoothly playing.

A: Before answering your question, keep in mind that the Windows RT based Surface tablet can not play any iTunes purchases with Apple Digital Rights Management (FairPlay DRM). However, all iTunes songs (at least in the US) will be DRM-free in steps since April 7, 2009. From my experience, if the song isn't copy protected it should play. For the little copyrighted iTunes songs, in .m4p format, you can upgrade these songs to DRM-free files for US$0.30/song or use DRM removal software to strip DRM from them free of charge.

For iTunes videos, if they are video podcasts from iTunes, you can play them on your Surface RT without any problem. But if they are Movies, TV-shows or Music videos which you purchased directly through iTunes store, they are all with DRM protection. DRM can not stop you transferring iTunes video purchases to Surface RT, but the videos will say "this file is not supported" or "this video can't be played" when you play these iTunes movies/TV shows on the Surface RT tablet.

In order to play iTunes video files on Microsoft Surface RT, you have to remove DRM from iTunes movies and convert iTunes M4V files to Surface RT compatible video formats(MP4 with H.264 video codec is highly recommended). To get the work done, a DRM Removal software is needed. If you're looking for ease-to-use, just check out Pavtube's ChewTune, which is an intuitive and stable DRM converter to help you remove DRM protection from iTunes, Amazon, Zune, BBC iPlayer, Napster, Blockbuster, etc. and convert videos to all popular video formats like MP4, MOV, MKV, WMV, AVI, FLV, etc. for playing and sharing anywhere you like. Meanwhile the playback of the converted videos is as decent as possible as original. The equivalent Mac version is the ChewTune Mac, which can convert and transfer iTunes movies to Surface RT on Mac OS X. Free download the right version and enjoy your iTunes M4V movies on Microsoft Surface RT without any hassle!

The quick start guide below uses ChewTune Windows screenshots. The way to encoding iTunes M4V to Surface on Mac is almost the same. Just make sure you get the right version according to your computer operating system.

Step 1: Add iTunes movies to the software. Launch the DRM converter and click "Add Video" "Add Folder" to load the iTunes video files to the program for converting. You can also simply drag and drop media files to the source pane to add. Batch conversion is supported so that you can add multiple files.

If you like, you can click "Settings" to change the video encoder, resolution, frame rate, etc. as you wish. For watching videos on the Windows RT based Surface Tablet, 720p with 1500~2500kbps is just all right. I found that bitrate higher results in big file size, and lower visible quality loss.

Once the process completes, download and transfer the DRM-free iTunes videos to your Surface RT Tablet via USB cable. Then you are free to enjoy and watch iTunes movies on Microsoft Surface RT as you like.

And yes, this workaround works with Windows 8 as well, of course. Click here to get known the basic tips for watching movies on Microsoft Surface RT.

To save your money, you can view Pavtube special offer column:

how to play flash games on surface rt

how to play flash on surface

how to play flash on surface rt