inserting a document into an email

Can anyone tell me how to insert a document using the surface email program? I don't see the traditional paperclip anywhere.

Maybe it's called attaching instead of inserting.
Last edited: Dec 29, 2012

Staff member
Swipe up from the bottom of the screen in the Mail App while in the New or Reply Screen and click Attachment.
OP
B

thank you so much

Thanks, getting the document to a place where I could attach it was the hardest thing. The swipe from the bottom up was also info I needed,

Having a File System has never been confusing to me but I think the file system in the apps could be a little less basic and that would actually help. Its not immediately clear that GO UP is clickable. Its a complete departure from all previous 'look and feels' as far the interface goes. Strange they chose this route but once you take a moment to get your head around it, its pretty smooth afterwards.

The interface had to change to become truly usable via touch. Otherwise you would have an interface similar to using File Explorer via touch, which while possible is far from ideal. Microsoft has stated that the interface is a drastic departure from the previous Windows interfaces, but this has occurred in the past and people will get used to it and shortly you don't even notice it anymore. The more I use my Surface the more my other non-touch computers seem lacking.

I agree Sin. I have a Surface on my desk along with my Laptop and 3 24" Monitor rig. I often catch myself reaching up to touch one of the NON-touch screens. I do think they could re-vamp the look to be a little more inuitive its gone TOO primitive in places. Either way I don't have many issues but can see how some people would find it less than immediately clear and easy to navigate. I remember the Windows 95 days fondly, so I agree that people will get over it and in time forget the old ways entirely. Whip out some 3.1 or WFW on someone today that used it back in the day and they may have some trouble..
. 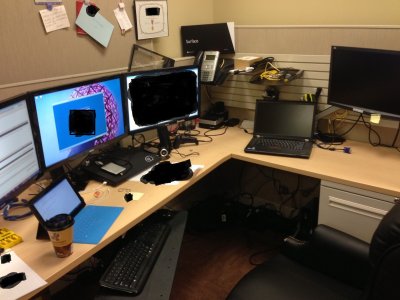 I definitely agree that the interface is basic in places, but assume that is just due to it being new as well as Microsoft not wanting to bury to much in the new interface. I'm hoping they will continue to improve the interface and add additional features as thing progress.

I still want to be able to post pictures to these forums from my surface. And while we are talking about touch friendly, lets admit that these forums DONT fully support surface or touch for the matter. Its rather ironic that these forums, while dedicated to this device, don't even allow me to upload a photo from it. Curious that I cant create paragraphs either, to say nothing of using touch to navigate the EXTREMELY small forum headers. I cant tell you how often I click on the user instead of the article they've posted, grrrrrrr.
Last edited: Jan 1, 2013
You must log in or register to reply here.

Just how many Paper-Weights does 900 million equal?

S
Help! Getting a 2 disk CDRom to Install with USB????