Just used my SP2 on a train for the past 45 min from 100% battery using my tweaked power saver profile that caps the max CPU speed to 75% and 25% screen brightness while tethering to my iPhone 5 (Edit: I was mostly reading a pdf in Drawboard PDF and writing in Word 2013): 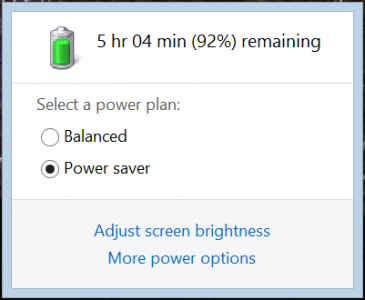 kayzee said:
Yeah there's got to be something else to it... never heard of cards decreasing batteries. I've had 2 Surface Pro's now and they've never been affected.
Click to expand...

Check this out: http://www.surfaceforums.net/forum/...ation-when-idle-due-faulty-audio-drivers.html I can replicate this error on any surface pro 2: put your SP2 into hibernate manually "run: shutdown /h" then resume while an SD card is in. Your device's CPU will idle at 30% with nothing open until you sleep it again.

I just tried it and I didn't get the problem. It went into hibernation... pushed the power button to wake it up... the task cpu spiked to 40% or so for a few seconds... then it resumed as normal. I was just running Chrome with 3 tabs open. 64GB SD card is in. You can see the spike below: 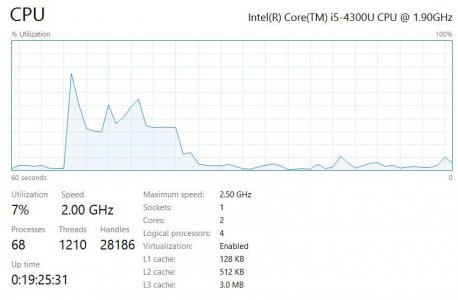 If you rely on a SD card you should just be aware of the issue of unusually high CPU usage after wake. I don't use a SD card but after seeing all the discussion about SD cards I was curious and so pulled the SD card from my phone. I didn't see it right away but eventually I was able to replicate the issue.

Dayton said:
Google it, surprised it is news to any SP2 owner. Monitor CPU utilization and after a few wakes you'll notice the percentage getting pegged at 24% or above. To stop it you can either disable Realtek Audio or force a sleep / wake. Of course if you aren't monitoring you will probably not notice but the battery performance will take a hit. This is what was happening with the broken firmware and owners experiencing battery drain over night, the device wouldn't hibernate but instead wake and start taxing the CPU if a SD card was mounted.
Click to expand...

Thanks, although I don't actually have a Surface Pro 2... does this effect the original model as well?
E

jrapdx: you still getting 9+ hours on your SP2? I'd be curious what the discharge rate is on our battery if so.
Last edited: Feb 5, 2014
M

This is strange, in that I've experienced my longest battery life on my Surface Pro 2. I almost universally use the Power Saver plan when on battery, and I typically get between 6-7 hours on it with light tasks (web browsing, news, mail). Today, I was doing some tasks plugged in and had it on Balanced, but forgot to revert to Power Saver when I unplugged it. It has now been over 9 and a half hours battery life at 40% Brightness with constant light tasks as I write this. I have an SD card plugged in at all times and my Power Saver is set for everything to maximize power savings (including throttling the CPU), and my Balanced is set to balanced settings throughout. I keep a close eye on my CPU usage, and there were no high rates of CPU utilization whenever I used Power Saver, so I wonder if there must be a power sink/bug somewhere else when using this profile. I'm going to test again tomorrow to see if this is a fluke.
E

What I'm running, whether active or in background, right now is Metro IE, Desktop IE, Mail, Bing News, Adobe Photoshop (old version), Store, News Bento. Adaptive Brightness off. Keyboard is attached throughout (LED lights are set to off), though mostly folded back when in Metro. Nothing connected to USB. Pretty much the default processes running at startup. For the lock screen, I'm running Mail, Calendar, Alarm clock, a Wifi meter app, and Viber. On the Metro interface, I have 7 apps running Live tile. I'm on the Balanced power profile, continuing my test from yesterday. CPU Processor is set to 5% minimum, 100% Maximum.

Sorry for the crap image, I can't figure out how to take a screenshot on this thing (god I miss Prnt Screen). Also, it's been running for almost an hour (no sleep or screen turned off during that span), and it has 90% battery level. It was also cold booted, with an SD card inserted, and had no substantial CPU utilization running at startup. I have a high quality card, though no idea if that plays a role. 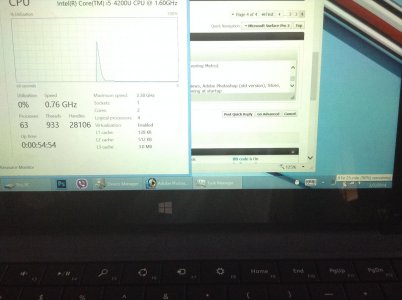 EDIT: Attached my iPhone to upload the picture, and it has a voracious appetite. Had it connected via USB for about 3 minutes, and it sucked 3% of my battery in that span!

EDIT 2: I have now used it almost continuously (let's just say I'm now well versed on today's current events!) for 8hrs. and 37mins on the Balanced profile, and I still have 26% battery remaining. This concludes one aspect of my test, in that I was able to replicate the longer battery life, which is over 2hrs more than what I was getting from Power Saver. Since I have that profile configured for maximum power savings, this leads me to believe that one or more of the settings utilizes more power when set to its lowest power option, or the profile itself is bugged in some other way (at least on mine). 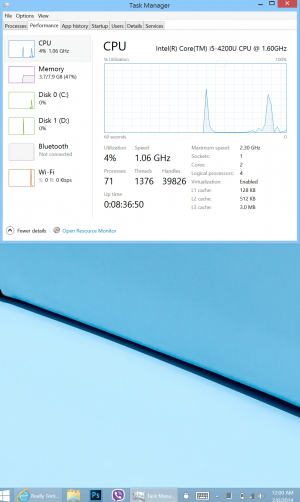 Interesting. Very similar use case to me. The only differences are I have a 4300u and the older .150 WiFi driver. It's still not clear to me how to get the .160 driver, apparently some got it through either the Dec. 2013 or Jan. 2014 updates though a lot of us did not.

You might want to install BatteryBar Pro and see what you're discharge rate is.

Thanks for the info!
You must log in or register to reply here.