Why the delay in japanese Surface Pro?

Why the delay in Japanese Surface Pro? Why are they going to get it after China, Hong Kong, Singapore, South Korea, Malaysia, Thailand? Just curiosity... 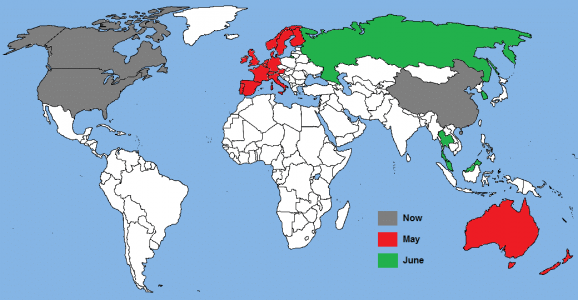 Just when my life started getting good, now THIS. I guess the Japanese don't already have enough electronics?
OP

Why Microsoft?s Surface will be no-show in Japan

TOKYO – When Microsoft’s Surface tablet is launched worldwide on Oct. 26, it will be a no-show in Japan.

Is Microsoft snubbing Japan because of its growing irrelevance as a market? Or is Microsoft wary about its Surface tablet flopping in Japan? At the same time, Japanese companies are rushing to release a host of Windows 8 tablets and PCs during the fourth quarter.

Speculation abounds here concerning the software giant’s first tablet. Surface will go on sale in eight markets including the United States and the U.K. In Asia, Microsoft will roll it out in China and Hong Kong, but not in Japan.

Microsoft has only said it is “undecided” about releasing the Surface tablet in Japan.

Analysts said Microsoft will forgo a launch here this year as it cooperates with Japanese manufacturers in hopes of promote sales of its new Win 8 operating system. Microsoft will launch Windows 8 on Oct. 26.

Domestic PC manufacturers including NEC., Fujitsu and Toshiba unveiled new models this week for winter shopping season. Despite a growing debate over the end of PC era, Japanese companies are hanging their hat on Windows 8 in hopes it will fuel growth in an increasingly saturated market.

Fujitsu has unveiled a series of consumer tablets called Arrows Tab. Just 9.9-mm thick, Fujitsu claims it to be “the world’s thinnest” Windows 8 tablet, equipped with such features as water resistance and an eye-tracking sensor. The eye-tracking feature enables an interface that’s getting a lot of attention here: Users can scroll the screen in all four directions by simply moving their eyes. The machine will sell for 100,000 yen ($1,263).

NEC's Lavie Y has an LCD screen that flips 360 degrees, allowing it to be used as a tablet. It was jointly developed by NEC and China's Lenovo. Lavie Y is the first model from a Japanese manufacturer that runs Windows RT, a version of Windows 8 for tablets. It will sell for about 90,000 yen ($1,137).

NEC's LaVie LCD screen flips 360 degrees, so that it can be used as a tablet.

Toshiba will release notebooks that can also be used as tablets by sliding the keyboard under the LCD screen. They are expected to sell for about 150,000 yen ($1,895).

Acer Japan Corp. is also reportedly releasing a Windows 8 tablet with a 10-inch screen, likely selling for around 70,000 yen ($884) by the end of the year.

Microsoft's Surface will be priced at $499 in the U.S. market, and will compete directly with all new products if released in Japan.

Whether new tablets and PCs running Windows 8 are sufficient to turn the tide for PCs remains unclear. Domestic PC shipments this year will grow only by 4 percent to about 16.3 million units, according to market researcher IDC Japan.

What is certain is that price competition during the year-end shopping season in Japan will be intense.
OP

There's a comment in the article that probably answers my question

rick.merritt
10/22/2012 4:38 PM EDT
M'soft would run a big risk getting an early black eye on Surface from sophisticated Japan consumers turning their noses down at a device that has good quality but sells in part by being a cheaper alternative to an iPad or a tablet from local giants like Toshiba and Sony.

Better strategy for M'soft is to build demand in more cost sensitive markets and see if it can build envy-demand in Japan.

It will be interesting to watch how this plays out!

I'm more concerned about the Surface Pro's plans for Iceland. First it's cold as s*** here and now this! God hates Iceland!
You must log in or register to reply here.