I have a surface pro 4 i5 4GB that has all the latest updates.

When I "shutdown" from the menu, I find the battery still drains over night (5-10%). I mainly use a work laptop so I only occasionally use my surface. So after a few days of non use, I sometimes find it completely dead.

I tried a shortcut to shutdown "C:\Windows\System32\shutdown.exe /s /f /t 0" hoping this will fully shutdown and prevent battery drain but unfortunately I am still seeing similar battery drain.

Is there a way to completely shutdown so I don't see battery drain?

Thanks in advance.
J

This is a known issue with the Surface Pro 4 and has been reported by me as well as many others on Microsoft community support forums (one of the forums has a thread discussion that has lasted for a year so far). It's a hardware issue that Microsoft has demonstrated terrible support for. This issue has come up with SP4s at the time that the warranty expires on the units. They suggest sending the SP4 to Microsoft to get it replaced with a refurbished unit, and you have to spend hundreds of dollars for this if the warranty has expired. Others have reported doing this and have reported the battery drain issue happening with refurb units.

Microsoft has lost my trust with the Surface devices due to this issue and their horrible support relating to it, and I will never consider buying any other present or future Surface device from them.
OP
N

I saw many old threads on this issue and was hoping it's been resolved. I guess I was wrong!
J

In case it should come up, I noticed that Microsoft released a firmware update for the Surface Pro 4 in which Microsoft states the following...

In light of the battery drainage issue that me and many, many others are experiencing with the Surface Pro 4 units while the device is off, I tried out the firmware update to see if there would be any improvement in the retained charge of the device. After having the device charged at 100% and then having shut down the unit, I then had it off of the charger for 16 hours and then checked it afterward. When I powered on the SP4, the charge was at 86%. So a 14% charge drop in a 16 hour time span, and absolutely zero improvement in the SP4 retaining the charge.

Quite honestly, Microsoft deserves to be ridiculed for their support of this issue. A very pricey device with multiple reports of this battery drainage problem from many others, and very unsatisfactory support from Microsoft relating to this issue. I noticed that they have an announcement coming up in a few weeks in which I'm assuming that they will introduce a new Surface device. They're not getting my business in light of their awful support of this battery drainage issue with the SP4. If anyone is considering buying a new Surface device from Microsoft (present or future), buyer beware.
OP
N

I've done all the latest update and used a shortcut to "C:\Windows\System32\shutdown.exe /s /f /t 0" to shutdown and after 24 hours the battery was still 100%.

I did notice the shutdown and startup takes a little longer but not enough to bother me.

So I'm happy with the result.

I've done all the latest update and used a shortcut to "C:\Windows\System32\shutdown.exe /s /f /t 0" to shutdown and after 24 hours the battery was still 100%.

I did notice the shutdown and startup takes a little longer but not enough to bother me.

So I'm happy with the result.
Click to expand...

That is good news, @next_milenium . Appears the problem is resolved. It may be helpful to others for you to post the UEFI firmware version you are using.
OP
N

How do I get the UEFI firmware version?

Staff member
Click the Cortana icon, then run this command:
Code:
The UEFI version will be shown as the BIOS Version/Date. 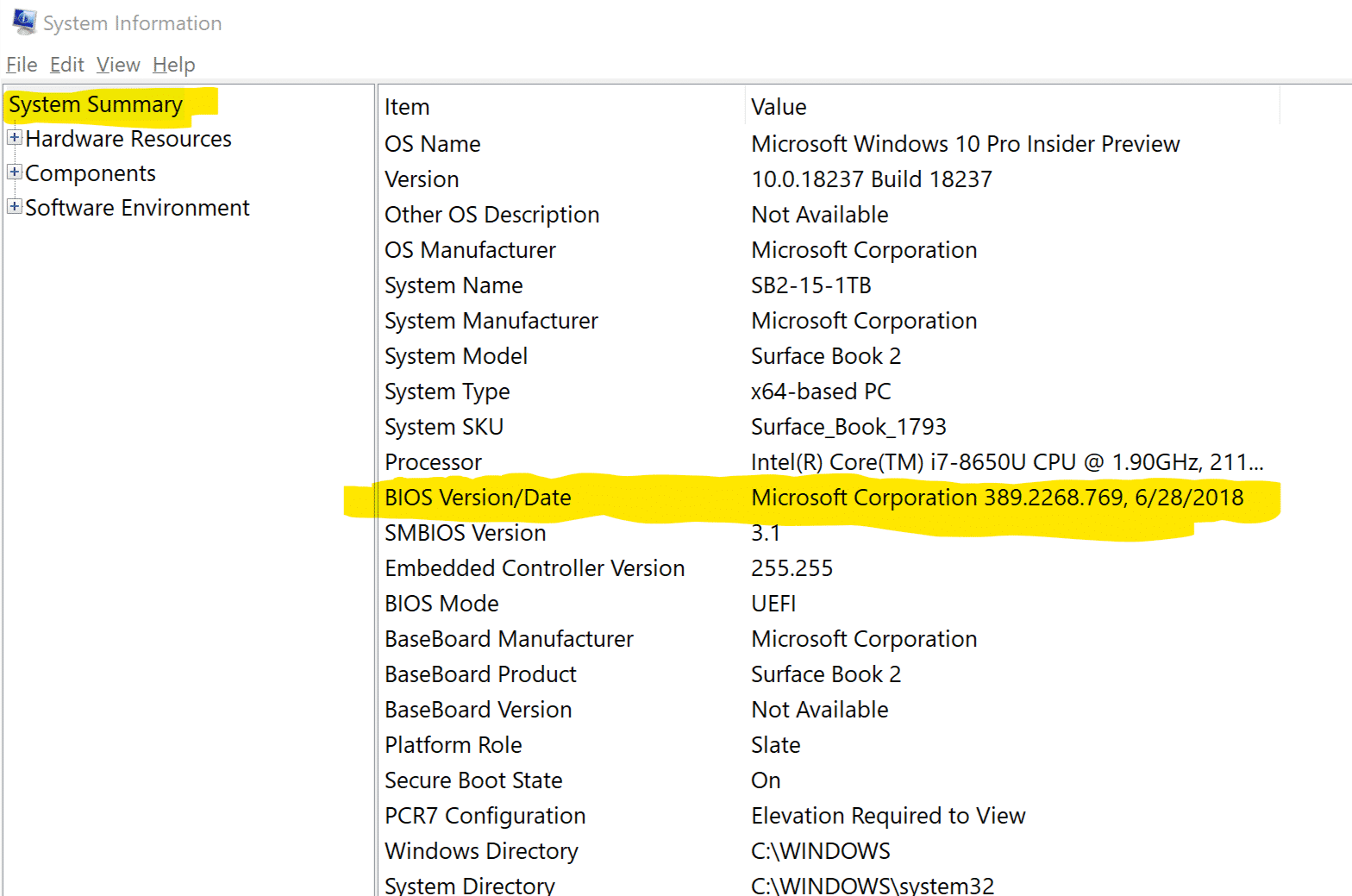 I do want to stress that I am using the "Full" shutdown command as shown above so I'm not entirely sure if that is preserving my battery life after the shutdown or the new firmware.

In any case, I'm a happy camper.
J

I'll try out this solution (shutdown /s /f/ /t 0). However, I can verify that even with this newer UEFI firmware version (108.2318.769 8/14/2018), if the SP4 is put into hibernation (not suspend but hibernation), with the SP4 off of the charger, the battery drain continues to occur, and that should not be happening.

I've now performed the above shutdown command with the battery charge at 31% and the SP4 off of the charger. I'll start it back up at a later time and see what the charge level is at.
J

Unfortunately I cannot confirm that Microsoft's latest firmware update fixes any battery drainage issue, even if the SP4 has went through a full shutdown. Not happy with Microsoft at all.

Even though a thread is usually marked 'Solved' after the OP confirms a resolution, this one remains open. I hope your continuing issue is addressed soon.
You must log in or register to reply here.