Just to set the stage, this weekend I did a restore of my SP2. Afterwards I noticed that some SP2 drivers were (still) not updating, so I tried to manually update them. I downloaded the February SP2 driver pack, then started by trying to update the Surface Display Panel. It reported it was successful... but not so. Instead of showing Surface Display panel under monitors, I now have Generic Monitor under Other Devices. I've tried deleting the driver, manually installing using "have disk", tried the automated approach by pointing to the folder containing the driver, tried deleting the driver, and restarting, I've tried installing it (supposedly) followed by a shutdown followed by a volume up/power for 20 seconds reset - nothing is working. Also not updating are the BT adapter, the Intel GPU, and the WiFi adapter - they always say "success" but the driver version never changes (but at least they work and don't become "other devices"!). I've also tried running Windows Update manually and it never finds anything

Any ideas would be greatly appreciated. The SP2 is functional, but the display is stuck at full brightness and cannot be changed, and of course battery run time now sucks as well. Haven't tried pen accuracy, that may or may not be bad now

In general terms does anyone know how MS manages to lock down device drivers for this thing? Is there perhaps a registry hack I could try? My best guess is that MS uses an "acceptable" list held in firmware somewhere

Same issue for me. I just posted the solution in this thread: http://www.surfaceforums.net/forum/microsoft-surface-pro-2/8291-regret-factory-reset-sp2.html

Basically after the reset you update the firmware first then any missing drivers manually before allowing Windows update to run.
Last edited: Mar 2, 2014
OP
R

Thanks. It turns out my firmware was up to date at the time I reset it, other than the re-occurring 2/11/14 update. Some things I've learned (the hard way) since my OP:
1. The Surface Display Panel update isn't a driver update at all - it is simply an icm color update. Only MS knows why this should have trashed the driver
2. I was able to manually change Generic Monitor to Generic PnP Monitor. My brightness controls work at least
3. My inability to update BT had nothing to do with BT. BT is simply a phantom device on what is otherwise a LAN composite device. The real driver (.sys) is installed by the installer using the inf and sys in the Marvell WLAN folder
4. In turn the WLAN driver would not update because Windows couldn't uninstall the existing one. I discovered this by trying to delete the existing driver, which would cause Windows to lock up (volume up/power for 20 seconds only cure). Further poking led me to discover that some of the existing driver files located in Sys32 and SysWOW64 had the wrong permissions. I increased permissions for the inf and sys files as much as possible, then I was able to uninstall the existing driver
5. Now I cannot install the new Marvell drivers. Windows reports that files are missing. From where I do not know. Now I have a SP2 with no working BT or WiFi, thus DISM /online is not an option for me to try to fix

The sheer incompetence of MS is astounding. Setting proper permissions is child's play. Driver upgrades are child's play. Not showing the same updates again and again is perhaps college freshman grade work, as is fixing the bug that says a driver upgrade was successful when it was not. Since this all happened with a reset, I have no faith in my particular SP2's image build nor does there appear to be a way to fix it.

Based on that I tried to do a new install from a legal 8.0 iso, but it refuses to use my current SP2 CD key so it will not install. I imagine that is because the key is for 8.1, the iso 8.0. I even considered simply buying a copy of 8.1 from the MS site, but it claimed to be an upgrade for 7 only - I have no idea if it will allow me to "upgrade" an existing legal 8.1 install on the SP2. I sorta doubt I can get the SP2 replaced - its way out of warranty. I have no idea what I will do, but I am leaning towards a Lenovo Carbon X1. I am not convinced MS has this tablet thing down, most other tablets are too small and pen - the main reason for getting a tablet with an active digitizer sucks on my SP2. In some places it is off 2mm no matter how I calibrate it. Oh well.
OP
R

A little OT, but when I tried to buy 8.1 from the MS store it wouldn't take my CC. Live for some reason thinks my region is Austria, not US. A quick search appears to imply the only remedy is to delete the account and create a new one. Wow. Just wow.

Changing to a different account on my PCs is not all that time consuming, but there is no way to change it on a Windows Phone short of totally resetting it
Last edited: Mar 3, 2014
OP
R

This seems to be my personal thread, but I'll post in case it happens to help others later. On SP2 I decided to do a refresh (first time was reset). Good news was wifi and BT started working again. Further good news was that I could actually update them. Then I made the mistake of plugging in the Type 2. Instant crash. Again instant crash. For reasons unknown the third attempt resulted in no crashes, but the touch mouse worked, the keys did not. Device manger shows the keyboard as other devices (2x). I cannot get them to update so the keboard is presently worthless

Having Office 365 installed on it, I decided to contact MS to sort out the credit card issue since the 365 subscription was about to expire. Given that I travel a lot I happened to purchase an app for my windows phone while in Austria last year. This changed my MS account country/region to Austria, thus it would no longer accept a US CC. Rep explained that "sometimes it does that". The totally preposterous part? They can't change the region, thus I cannot pay for anything. Only option - delete the MS account and create a new one. Doing so requires uninstalling all 365 products then reinstalling using the new account. Switching to a new log in account is easy on Win 8, proving that you paid for apps using a deleted account not so much. Then there's my windows phone. The only way to change the account is to totally flatten it and start over, and again you have to prove the apps you put on it were paid for under an old account. Wonderful. So I am done with the cloud/subscription/SP2 thing. My job requires a lot of serious simulation so I have been running an i7 in the office and (sometimes when it works) an SP2 on the road. Both will be retired in favor of the X1 Carbon in both roles as it sits somewhere between them. The SP and SP2 have proven to be the most anti-productive devices I've ever owned. That's too bad because I REALLY like the promise, I just wish it could deliver
D

Rvacha, I am sorry to hear of your issues.

I just happened upon your thread. After reading it, I think I will do NOTHING.

Everything is fine in Device Manager. Runs like a top. I'm just at a loss... Based upon your thread, I'm just going to live with it or turn off AU and wait until Mid-March when another one is released...

When using Windows Update Diag it gives me the same results everytime: 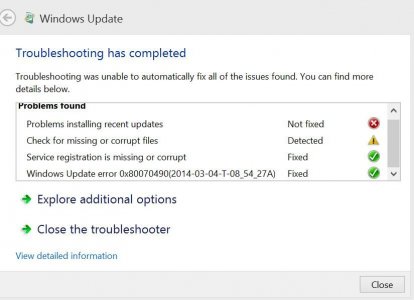