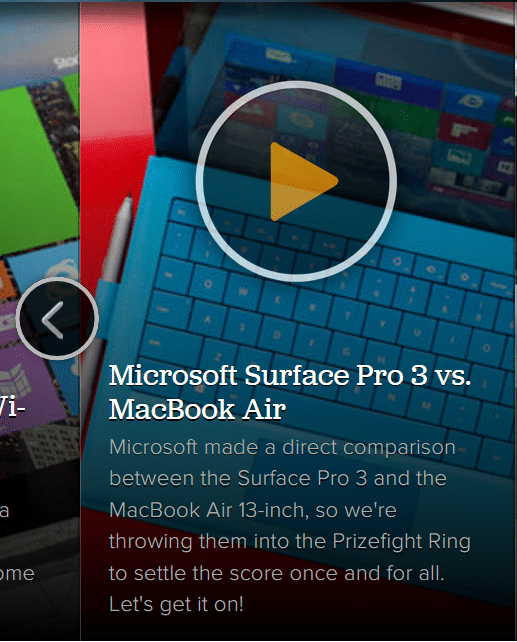 Staff member
With the team who did the scoring it was obvious which device would Win as all 3 use the MBA as their personal device. But I was surprised a bit by their limited praise of the SP3.
L

I wasn't surprised about that, the SP3 and previous SPs have a lot to like about them. But overall the MBA is a better laptop and not a tablet at all.

I have an SP (original) 128Gb which I use as a tablet almost all the time, it is just so handy. When I had the Air it wasn't so good while in the recliner, nor is my MBP w/Retina 13". And I do most things from the recliner these days other than when I'm doing music engraving with Sibelius.

Some things that the shoot out didn't mention was the lack of really great technical support from MS. For a premium product such as the SPs, that should be a given but isn't from all too many reports.

And the nearly total unrepairability of the SPs is a really big issue. The MBA isn't a jewel to work on, but in comparison is just dead simple.

I think those last two need more attention from MS.

CNET was never a great tech website but now it seems like they have totally sold out. They really love Lenovo stuff and surprise, surprise there is a bunch of Lenovo ad's on their website. Saying that MS set themselves up by the stupid replace your MacBook Air campaign. The SP3 is much more than a MacBook Air replacement.


lparsons21 said:
And the nearly total unrepairability of the SPs is a really big issue. The MBA isn't a jewel to work on, but in comparison is just dead simple.
Click to expand...

What tablet is repairable?
L

The iPads are repairable though probably not user repairable.

Perhaps I haven't seen all the MS ads, but the only ones mentioning the Air that I've seen are the ones stating "Lighter than Air."

When I read that, I know what they are comparing against and I interpret that as a marketing campaign to tout the SP3's light weight--especially since there were so many harsh criticisms regarding the weight of the introduction of the original SP. I don't see that campaign being about anything more or less than just the weight of the devices, period.

If you're going to compare two different architecturally-based devices, then at least make sure that both are equivalents on their competing architecture. That is, when Apple makes a MacBook Tablet/Laptop, then by all means go ahead and compare against the equivalent Intel-based device(s) from MS (or whomever).
You must log in or register to reply here.
Share:
Facebook Twitter Reddit Pinterest Tumblr WhatsApp Email Link
Search tags for this page