iPad vs. The Surface RT

That's awesome. The Surface stands up while the iPad just lays there like a chump. Of course, you know that all the fruitcake fans will come out and try to dissect the ad into something else to their favor.

Lol, been loving those commercials for some time now - well before I got my RT even.
P

Nice. Should have shown the mouse/touchpad too!

iPad is a toy for kids!
Newswire | U.S. Kids Continue to Look Forward to ?iHoliday? | Nielsen

Shows that most in the US want a toy not a tool; doesn't surprise me much.
P

I see the same trend in a lot of markets. Most people don't want to bother researching what the options are and weigh which one would work best for them. Their entire purchase decision is "which one is most popular?" and they buy that. In the case of the iPad, its a solid device and people wont have a bad experience with it. They also will never know that there could be better things out there too. Its difficult for a new product to penetrate that kind of groupthink once its established.

i wish ms would do away with these ugly backrounds... just the puke ones. Escpecially in there adverts. It also seems like the reviewers pick the ugliest backgrounds to showcase the photos- case in point: 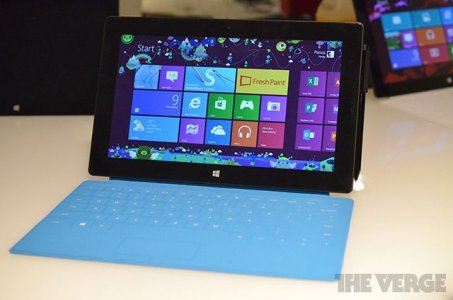 @Tony...I second that. Those backgrounds do suck, big time! Similarly, I am not a fan of those new moving dragon backgrounds either (at least based on what I have seen thus far in some of the videos).

And, with reference to those charts depicting buying trends, I think what is at stake is the perception people have of devices. Here is an example from my place of work. So, we who are in a pure research role were given a budget to buy some devices for ourselves to aid us in our work. We were told that though our employer would pay for it, the devices were ours to keep, which was mighty generous of them. You guys can probably guess what I bought for myself! But the case that I am referring to is about a colleague of mine, who is a scientist. She used her budget to buy the iPad mini. Now, recently we were at a seminar together and she saw me there with my RT. I was banging away on the keyboard catching up with some emails. She was immediately intrigued by it. She asked me the usual questions about the RT, which I dutifully answered. She was particularly fascinated by (1) the Office suite and (2) the tear-away keyboard!!!! She also remarked that if she had known about the Surface she would have probably opted for it. But the fact is - all reasons aside - that she did not. When I asked her why she bought the iPad mini and not the Nexus 7 (same or similar profile), her reply was that it is - within quotes - "oh so popular..."!

I work in a lot of primary schools and the most common debate is tablets. All the schools initially ask for iPads. That's mainly because there are large amounts of prepared material for using the iPad in a classroom and other schools have already done the ground work.

I recently had a meeting with a Head teacher who wanted banks of iPads for the kids with a long term goal of a 1 to 1 project of 1 child 1 iPad. During the meeting I was making notes n my surface RT. She asked how I was using Word on my iPad. After I explained that it was in fact the surface and showed her office and network connection to the schools Windows based LAN she promptly ordered herself one. Then a further 30 for the students.

Nice!!
You must log in or register to reply here.