No availabilty because of popularity or problems

It seems strange that the 256 Surface Pro 2 is unavailable for sale. I thought it
Was just Popularity but now I'm starting to believe Microsoft is holding back on supply
Because of quality problems with this Surface Pro 2.
C

It was out of stock in the UK for a couple of weeks, but has been available again as of Monday. 512 not back yet though.
I suspect both - reduced stock levels compared to the more popular lower spec versions, and possibly holding back stock in reserve due to the number of recent returns.
T

Based on zero facts, I speculate they're only making relatively small batches, but trying to pump those batches out as quickly as they can.

Would be interesting if someone knew something
L

I think it all ties in to the relatively slow uptake on Windows 8/8.1 itself. IOW, why buy a machine based on an OS that isn't all that popular? Possibly when 8.2 or 9 comes out with the rumored change to make the desktop the default on startup there might be some change in how the market goes.

The Surface Pros are very good boxes with a good reason for being, but so much press about the RT/2 and the hamstrung OS on them kind of puts a negative view on them.

Because of this and not wanting to take another write-down MS is probably doing some very tightly managed production.

All pure guesswork, of course!!

I think the guesswork here is probably pretty close to what's going on -- such a huge loss the first time around they've gone into a make-some, sell-some, then make some more... I think they need to work on the whole selling process though. Outsourced sales for a high ticket item are OK if everything goes as planned during the purchase process, but one minor hiccup and you're dealing with scripted responses and very limited customer service.
D

I don't see how one can jump to quality as a reason. I've had a 256 since launch and except for MS forcing me to use a broken firmware for a month the device has been brilliant.
C

...seems they're slightly more in demand than when initially launched, when they sold only 90 in the UK:

Wow! that is pathetic!!
G

I think that Microsoft makes them as they sale them. In other words, they place small orders of the device so that it fully sales, to basically not have any in stock to not do any losses.
Microsoft Quarterly report show that the sales of the Surface line (Surface 1/2/Pro1/Pro2) has doubled. This is big news. While many will criticize that it's a failure (because bashing Microsoft for anything they do attract clicks, and it in fashion), in reality, this is amazing good.

People don't understand how a product life cycle works. But except in absolute rare cases, a company always make massive losses at the early stage of the device, and then later makes money. 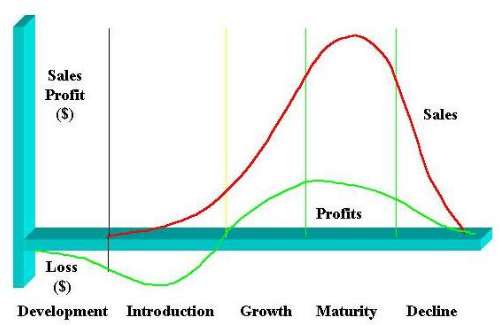 Now, the above shows a graph of a single product in general to show the idea, it doesn't consider the rapid and required pace of technology advancement, and that you need to consider a group of product (version 1, 2, 3, 4, 5...) within the same "product life cycle".
For instant, look at the iPod. It used to be about 1000$ the device, for the first generation, didn't sale at all. then over time it sold like crazy, and now the device is reaching decline, as now most people don't buy MP3 players, they prefer their phone for music (despite the inferior sound, very limited storage, and awful battery life because people seek for 8 core CPU's and 4K displays and all that crazy none sense that you actually don't really need, and improved battery should be a bigger priority, but that's a different topic)

So, seeing that sales of the Surface line of product has doubled, it means that Microsoft has something in their hands to be profitable, and not drop the project/product in the water. They push for Surface 3 (and Pro 3), and continue forward.

Let's be honest, the Surface Pro series is a serious system. Has some serious power. But most people, all they use their tablet for, is watching videos, playing Flash style games, and surfing the web. They don't need a Core i5, they don't need even true multitasking, and they are content with a simple Android or iOS tablet. And that is why sales are down for desktop PC's. People say it's Windows 8, but sales has been going down since the end of the life cycle of Windows 7, even before that. The only reason why Windows 7 market share grew, is because businesses and enterprises were and still are switching to Windows 7. Companies follows a 6 year life cycle, because it takes time to train employees, test software, have custom software work properly for the new Windows (many companies (non-tech ones), don't have a dev team, they hire firms to do the custom software, and usually they lock things down, to get a new contract with them to have it "Windows x supported".

Results:
-> IT and computer enthusiasts will rave about it, because it's more power user focused
-> Businesses, which have hundred or thousands of computers will upgrade, and some will have to upgrade, boosting sales of laptops and desktop (but businesses are going mobile now, so expect more laptop sales increase)
-> Surface Pro 3 might enter the business world, thanks to it's Intel CPU, making it able to run any VPN solutions and custom software from the company.

Sales will be up. Windows 8 will be been as a Vista, despite, Vista not being a horrible OS, just ahead of it's time in terms of computer power. If you put Vista on a today's computers, you'll see it's runs pretty well, and give you a solid experience. It was mostly OEMs putting Vista on crap system configurations that didn't follow Vista recommended specs.

Ad because it was brought up, I'll continue, although, my apologies it will push this conversation in a tangent.

I am not saying that Windows 8 is perfect either however. Windows 8 is more a vision of the future. People want change, but don't like change. Windows 8 would have had a way better response, if the OS was more of a transition.
-> Have the power button on the Start Screen
-> Have a snap left/right and close button on Windows 8 apps
-> Have a tutorial system like you have in 8.1
-> Have a help and tip tile like you have in 8.1
-> Post online videos and do quick TV ads like in Windows 7.. what happened to those? They show cased Windows 7 perfectly, and showed it's new features and abilities. People would have seen how to use Windows 8!
-> Explain advantages of the the Start Screen. Show that you can pin folders to get direct access to your stuff. Many people don't know about this. Provide suggested layout for desktop, laptop, and tablets. You could have market it as "Your Windows", and push on how you can customize your Start Screen the way you want

THEN, in Windows 9, you can remove by default, the added buttons on Windows 8 Apps, you can remove the Start button, and essentially turn it into Windows 8 of what it was.
Like Vista, I feels like the engineers at Microsoft was let loose too much, and let their creativity and vision of the future kick-in too much, resulting in a lack of consideration of the current state. Vista could have lives without it's glass interface and as fancy visuals as it was, and focus more on optimizations for average-end system of the time, and focus on compatibility of basic drivers for like printers and such.

Anyway back to topic, Surface Pro 2 is awesome! Sadly, Microsoft is avoiding the over production of them like the first generation Surface line of product.
L

Surface success is tied very tightly to Windows 8.x and how well it is received.

MS made the touch interface nearly all important for desktop/laptop use but didn't make the case for it actually being all that good in that environment. Mostly because the case has never been made over many long years. Touch isn't new at all and has nearly failed in desktop/laptop environs. That was the biggest fault with Windows 8.x.

Touch makes perfect sense on a tablet for many things, even on tablets as powerful as the Pro line. But it doesn't make much sense anywhere for content creation for the most part. It is one tough sell that hasn't been really made yet.

The 256GB version has constantly been out of stock here in Germany as well. Every store I check. It says "In stock" for a day or two and immediately goes back to "Out of Stock". I odn't know if this is a glitch or really selling out that soon. I checked in a physical store today and they said it's not available and must be ordered from the US.

It takes several weeks to get it here
G

The 256GB is the most popular one as most want the 8GB of RAM. 64GB is the worst deal, and easier to find. 512GB is too pricey.
You must log in or register to reply here.

R
Inaccuracy Problem near the Taskbar?