Earlier this week I was all excited for a SSD that I ordered from Newegg for my Samsung Ultrabook. The quality of the ultrabook is great, but the hard drive sucks ass. So I decided to upgrade the drive with an 128GB SSD. The stock drive was 500GB, but really don't need all that space. So last night, my order came in and I was having the hardest time to boot from the USB stick to install WIN8.1.

So I decided to connect the SSD to my desktop and install Windows. Then I took it out and placed it in the Ultrabook. Install went great and all working great last night. After the WIN8.1 install I went to bed and decided I'll do all program installs at work.

So this morning, as I was getting my things together, I reached for my ultrabook and it slipped out of my hands. No damage was made to the laptop, but the goofy fall did land on the power adapter end and bent the crap out of it. UHG!! That power adapter tip was the weakest thing I ever seen. So now I'm having to conserve power until the new adapter that I order comes in.

What a huge difference with the SSD, this things is a lot more responsive and fast than with the traditional HD.

Happy with the SSD and performance but pissed that the little power tip is broke. Funny, I had an Acer netbook at one point and that power adapter tip was the size of my pinkie end. I have this high end ultrabook and the power tip snapped easily like a toothpick. 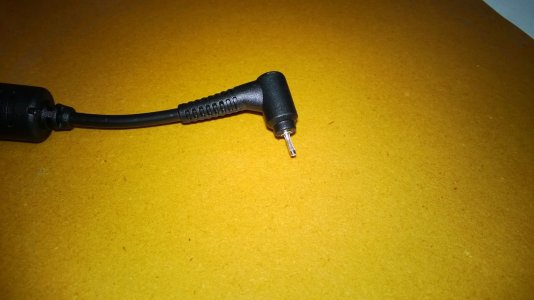