I just bought a SP2 and am having some problems. It's primary use will be connected to my TV as a media center with the option of unplugging it and using it as a laptop away from home (4-5 times a week).

Here's where the issues come in. I have the SP2 connected to my TV and the settings are set to only output to the TV (surface screen is off). I've actually tested these with duplicate mode as well and the same issues arise.

When connected to the TV, it seems to work beautifully. However, there are screen artifacts on certain applications and always when viewing video on the device. I've attached a couple of screenshots. The main screen has no visible artificats. The ESPN app has a ton of red artifacts on the left side of the screen and all video files have the artifacts as well (although not as noticeable as the ESPN app).

Next, when I do certain things on the device, the TV loses the signal. For example, clicking on the down arrow to bring up the list of applications, the screen resolution seems to change (flickers for a second), shows the applications with terrible red artifacts everywhere, and then the TV loses the signal. Also, If I go to Settings->Change PC settings the screen does the same thing. It flickers for a second, you can see the settings screen for 1-2 seconds, then loses signal. When I hit the windows key on the keyboard, the screen comes back on to the default landing screen. Hitting ctrl+alt+del to bring up task manager will also force the TV to lose signal.

Also, occasionally I will just be letting it sit on the home screen and it will continuously lose and regain the signal without me doing anything whatsoever. The only thing I have plugged into the device is a Logitech receiver for a Logitech K400 keyboard/mouse.

Does this sound like a cable issue or a hardware issue? If hardware, does anyone know if MS will warranty this while I am out of the country? I'm on assignment in China for the next 6 months so returning to BestBuy or MS could be an issue for me. If it's a cable, I can probably pick up the official MS adapter here in China somewhere.

I've seen the artifact thing before on my Raspberry Pi and was able to fix it by amplifying the strength of the HDMI output of the device. I'm not sure I can do that on the SP2. 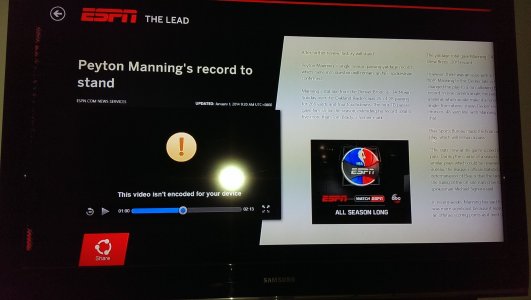 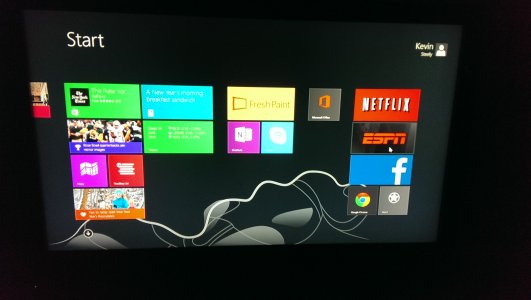 One thing worth trying is setting desktop scaling to 100%. Shouldn't change start screen stuff, but worth a shot.

Does it behave the same with the keyboard/mouse unplugged?

See what others have to say first, but a long shot might be to install graphics drivers from Intel.

I would certainly try another cable and adapter before returning the Surface. Try just mirroring instead of having the screen only on the TV. If the problem persist on just the TV and not the surface I would say theres a strong chance its the cable.
K

I would try a new cable. I had a different issue but swapped out the cable and all was good.
OP
S

Any suggestions as to which brand of cable to buy? If I can't find the MS version here, I'd like to buy one that has a good reputation. I could easily buy one of the Apple mini DP->HDMI... would that work or is there something in the hardware that makes it only work on Apple products?
Last edited: Jan 1, 2014
D

I have noticed other posts regarding cable issues and some of them were problems with aftermarket cables. I noticed MS makes a different adapter for the Surface, and another
for the Surface Pro so maybe there is a difference. The SP2 adapter is pretty easy to find now. It might be worth a shot.

You definitely should try another cable.

I bought this from Amazon and I use it regularly on the road and have never had any problems.

I used the following instructions to rid myself of the screen flicker issue and who knows since it is a graphic driver it may fix your issue as well...


"You need to download the Win64_15338.zip from this link, not the .exe file.
https://downloadcenter.intel.com/Det...09
Once you've got that and its extracted you need to go into the device manager and right click on the graphics device found under "Display Adapters". Click "Update Driver Software" > "Browse my computer for driver software" > "Let me pick from a list" > "Have Disc.."
Now you need to click "Browse" and point it to a file named "igdlh64.inf" which is found inside the folder you extracted earlier under the sub folder "Graphics".
Once that's done hit next and let it install and the driver is installed!"
OP
S

MickeyLittle, that link doesn't work! I actually went to the Intel site and downloaded the 4400 driver I believe. It definitely made things worse for me.

However, I decided to do a complete reinstall using the recovery options in the settings and it's made quite a difference. I still have artifacts in the ESPN app and elsewhere, but things are a LOT better.