Generally do you find the Sp4 m3 faster than the Sp3 i5?
G

Zippy0n said:
Generally do you find the Sp4 m3 faster than the Sp3 i5?
Click to expand...

The best answer I have right now is, it's probably a little slower. Some of the bugs get in the way of making a solid determination empirically but I haven't really focused on that yet.

PassMark highlights a few things.
Red = SP3 i5 *(selected from their database in roughly the 85-90th percentile ranking)
Blue = SP3 i3 *
Yellow = S3 Atom *
Green = SP4 core m (one run on my SP4)
PassMark Rating: Overall score SP3 i5 edges out the SP4 core m by 9.2% that's not much really.
CPU score SP3 i5 by 23% you could notice that at times.
2D Graphics, SP3 i5 by 50% sounds significant but may be less important than the others. (Intel is focused on 3D graphics).
3D Graphics Here is where the core m out performs the SP3 i5 - down -32%.
Memory is pretty close with 8% difference (not likely noticeable on most things.)
Disk the SP4 comes out ahead.

The SP3 i3 is beaten handily by SP4 core m and the Surface 3 which is hobbled by slow disk is far behind.
I know you have a Surface 3 so that should help you a lot. 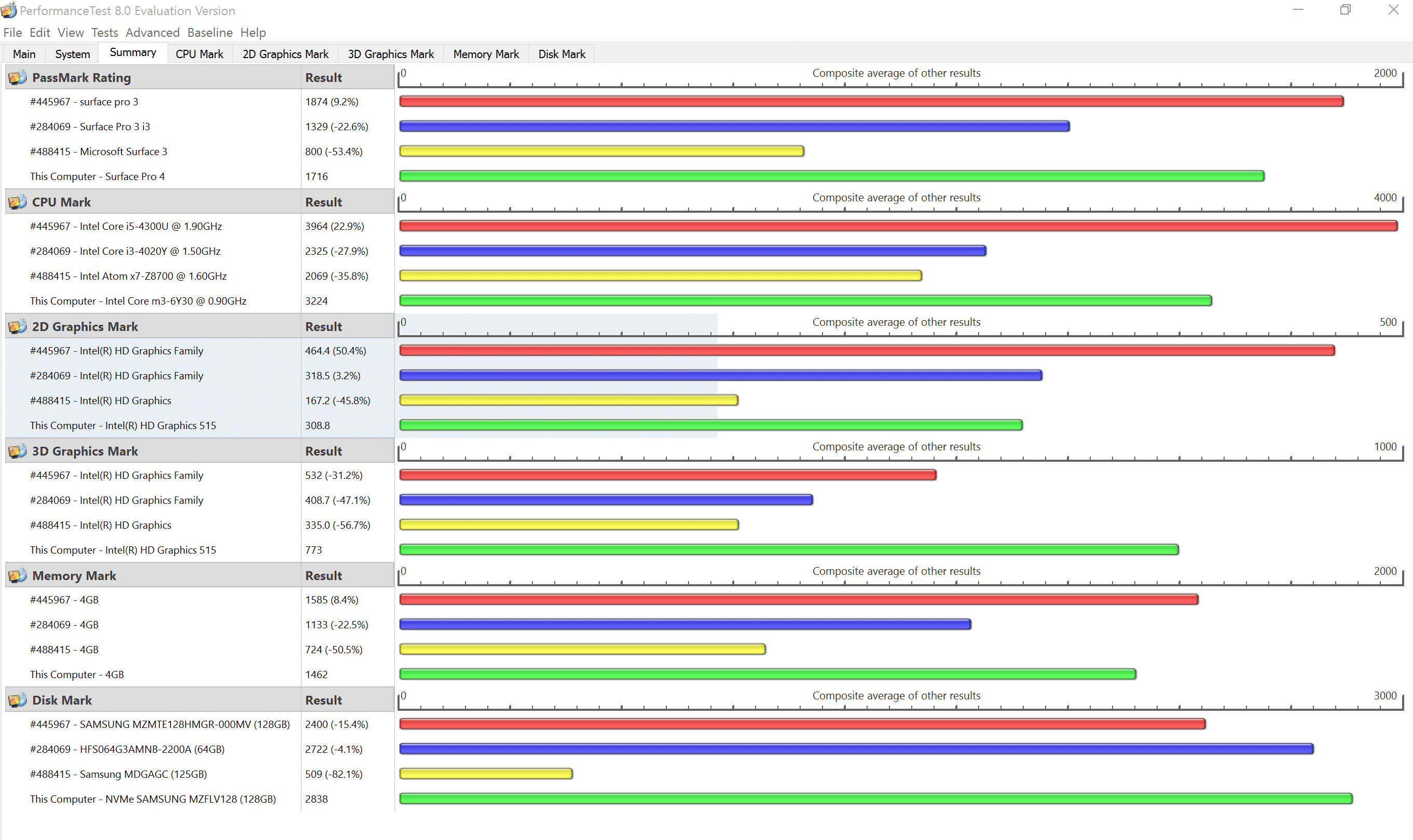 Wow great comparison, surprises me the core M3 is not too different from the sp3 i5. I'm selling my S3 as package (I'm in the UK) if anyone's interested since I do a lot of video editing I need my i3 laptop more. Maybe in the new year when things get ironed out I'll venture for the i5 sp4
L

Hmmm which one should I choose? Core m3 or i5? I would use this device for studying and I would like to do some basic editing (GoPro 1080p, very little 4k) when I am on vacation or something similar... I have laptop which has 8gig ram and i5, so I just cant buy similar device (i5 and 8g ram) and ofcourse this is about money also.
I am just wondering that would m3 be "useable" to do just basic editing -- then later I would do "real editing" with my pc.
Which one would you choose? Can you do light editing with m3 and 4g ram.
I might just use that extra 100e to add ramm to my workstation, if core m3 suits for me
L

Based on the scores posted above, I'd say the M3 would have no problem with basic video editing.

I say this because I had the SP3 i3 and I did GoPro video editing on it and had no significant issues doing so.

According the table above the M3 smokes the Sp3 i3 so yeah, I'd say you should be good to go with the M3.
Last edited: Nov 16, 2015
You must log in or register to reply here.