You have the same problem as me. Nvidia Tegra Audio is preventing it from sleeping.

Here is my error, looks the same. Mine is in Swedish but is the same error.

I've tried every solution I can find, nothing have worked. I'm experienced with Windows, worked with it for years but couldn't solve it. I contacted Microsoft Support and they can't solve it so they are sending me a new unit. I suggest you do the same. 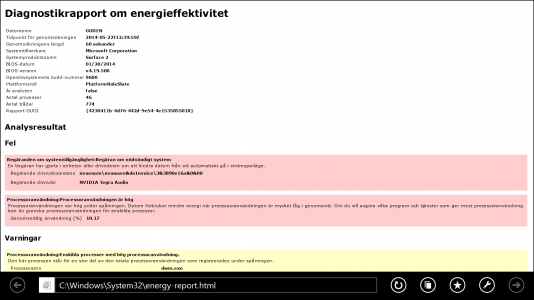 Thanks for the reply, I don't think I am too concerned it doesn't enter sleep - I typically close down the machine after each main usage.
Strange as this may sound to some I know.
It seems to have a high CPU usage, is this the main cause of concern and if so how do I reduce usage in these areas.
There is a Microsoft store nearby, I may take it in and see if they can help or indeed exchange?
I guess I am used to my iPad and not having to adjust what effectively is a proper pc as opposed to tablet.
F

I wouldn't be to concerned about the warning about the processor use, it's is using some power to make the report which is why it shows up, i think. Yes I would take it to a Microsoft store and mention the Nividia Tegra Audio driver error and show them, then they should give you an exchange.

I notice aswell a difference in battery life compared to iPad, absolutely. I've used several iPad and they last for so long, my Surface 2 just don't do that. But then again, I don't know how much the Nvidia Tegra Audio-driver is impacting on the battery life. I can report back when I get my new unit. I have to send mine away for 5-10 days though before I get another one :/
Last edited: May 24, 2014
OP
T

As with you, if I mute the sound the NVIDIA Tegra Audio Driver error doesn't show but returns when turned back on.
I will try a system refresh and see if that helps, if not off to the MS store.
Incidentally, after turning adaptive brightness on/automatically adjust brightness my usage has improved slightly, around 14% drain per hour. (based on last 3 hours)
This is still not great but going in the right direction.

Staff member
Do the Reset and updates, without tweaking the settings, see if it improves but you may have a faulty Tegra4 SoC.
OP
T

Refresh didn't solve the NVIDIA driver issue - off to Atlanta shortly and will see what the guys in the MS store have to say.
F

Tewy said:
Refresh didn't solve the NVIDIA driver issue - off to Atlanta shortly and will see what the guys in the MS store have to say.
Click to expand...

Good luck. I have to wait 1-2 weeks before I get mine back. Please update us with what happened aswell
Last edited: May 24, 2014
OP
T

Quite a waste of my afternoon, 100 mile drive there and back to Atlanta for little reason.
I was served by a nice young girl, barely out of school and explained my issue and showed her the energy report.
She observed for a while and said nothing, I enquired and she said she had never seen this before - immediately I knew oh no!
She then noticed I had some apps open and tried to tell me this was probably the reason for the drain, when I enquired how many she told me two, I was expecting her to say twenty or something!
Apparently I had not been shutting my apps down correctly, just pulling down and not waiting for app cover to turnaround.
I don't think that the weather channel and IE running in the background would really be a problem.

I tried to explain this wasn't that uncommon to no avail, and that it seems it is a hardware fault so could they exchange.
When I told them it was purchased from Staples they said take it back there, this is not possible being over 14 days.
I told them Staples said I had to deal with MS after this period and here I am!
Again, this was to no avail, the manager kept stating they couldn't exchange items purchased from none MS stores.
I protested more but the best they could offer is to send to MS for me and await either a repaired or exchanged unit.

This doesn't suit for personal reasons, I return to the Uk for 3 weeks next Wednesday so not ideal.
I will monitor the performance over the next few days and decide upon my return to the US if I return or not.

It does seem slightly better after turning adaptive brightness on, I performed a refresh this morning and updated.
This takes quite some time with updates etc and getting other things back to normal.

I will see how I get on and if the performance changes I will let you know.

Best of luck in getting your unit back.
M

Both commands will creates a HTML Reports that lists what is impacting your battery and/or preventing Connected Standby
Click to expand...

I turned automatic brightness off because it was making my screen fluctuate. I mostly use mine near an electric source and just plug it in but I still need to know how my tablet will react on occasions where it's not plugged in.

Also, I just found this forum! Hopefully I will get some answers to a few problems I've had. Overall I LOVE this thing! I almost got an ipad, but I'm so glad I opted for this one. I also almost opted for the surface pro but I didn't want to spend more money on software. So far the office version that comes with this one has been great!

It's a mystery to me why these things aren't more popular. A lot of the reviews negatively compare it to a laptop then complain about features that an ipad wouldn't' be able to do either. I like it just the way it is, a hybrid tablet/laptop. I hope they continue to make and support this device. It would be nice to have more apps as well, or at least ones that work better. So far though I seem to be doing great without them.

I noticed that the most recent updates (which I received yesterday) has definitely positively affectively the sleep issues and may have even marginally improved battery life.
M

I noticed the update as well, I'll be keeping an eye on my battery and sleep issues.
You must log in or register to reply here.