Hi, does anyone know the types of audio codecs(?) or files the Surface will play? I can't find it in the specs. If I load a movie with the right video parameters, but the audio is encoded in AC3, is the surface able to play that audio? Anyone tried this? It would be nice to be able to load the same movies I use for home use on the surface, which generally use AC3 audio.

Our main goal for native media format support for Metro style apps was to ensure users and app developers could count on a consistently great playback experience across a wide variety of PC form factors, with modern formats used in mainstream scenarios such as: 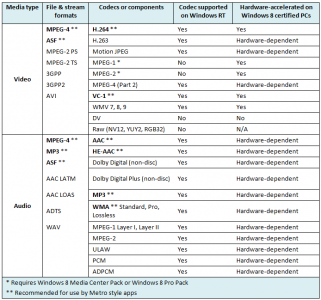 Presumably there is a lot of support in Windows but it needs to be implemented through apps. I am not sure what MS chose to support by default.
OP
M

Thanks for the info above. I guess I should have specified - when playing a video file through the Surface video player, does it support Audio encoded in AC3? A lot of my videos are encoded in AC3 audio for home use, so it would be helpful if I didn't have to re-encode it in another format. I'm picking up a surface today (confirmed I can try it out for 14 days) so I will load a video and find out and let you guys know.

I can confirm that the Surface plays AC3 audio, I transferred a movie with AC3 audio and it worked, very cool! I have tried this on an iPad and several Android tabs and it never worked. Nice.
You must log in or register to reply here.