My Pro 2 256GB came in today. Being a big time gamer, I'm going to test a few of my current favorites and write a short blurb about how they performed, and what settings I was using.

I have installed all updates for both the games and the Surface itself, including a firmware update for the Surface. Games mentioned are the versions you get from Steam unless otherwise noted, with the exception of Blizzard games, which of course come from Battle.net. All tests were done using an external mouse and a Type Cover 2. I was on the battery, with "High Performance" selected in the system tray. I used the internal speakers with the volume up pretty loud. I measured fps using fraps, though I did not record gameplay during the tests.

I tried recording some gameplay with fraps, but I'm trying to give numbers that don't have to be eye-balled. Fraps brings a hit in performance that isn't the same from game to game. I may setup a video camera to just record the screen, which would be the best way to see exactly what happens during a session.

Diablo III - Flawless
I played D3 at 720p with all settings at "High", with shadows at "High" (not Smoothed) and performance was in the high 30s and 40s 100% of the time. Dropping settings down lower sent fps to 60fps and beyond. Gameplay was flawless. Tried at 1080p with the settings at high, and it performed alright, around 30fps most of the time. It's playable at that res for sure, but at 720 you get maximum comfort and never a slowdown. Played for about 45 minutes, tested indoor and outdoor areas, including areas with many enemies. Recommended.

Hearthstone - Flawless
Hearthstone is a card game from Blizzard. While it is just a card game it does use some graphical effects, and the cards and game board (and menus even) are all 3D objects that animate and move. Gameplay was perfect at 1080p with all the quality settings up. Works great in tablet mode as well. Recommended.

Counter-Strike: Global Offensive - Flawless
Played at 720p with all settings on "High", some have settings above this level, but I chose high as an easy to specify baseline. AA was off. "Laptop Power Savings" was off. Played two games of Gungame/Arms Race against bots on the map "Shoots". Stayed around 40fps the whole time, with zero slowdown or struggle. Played a few rounds on a random casual server on "Dust" and "Office". No issues at all. Stayed north of 30fps 100% of the time, and north of 40fps most of the time.

Team Fortress 2/Left 4 Dead 2 - Flawless
This one is pretty simple. 720p, everything at max. Game works perfectly. These older Source games are not very demanding, so this isn't a surprise. Fps stays north of 40fps at all times, usually 60fps or higher.

Far Cry 3: Blood Dragon - Alright/Good
At 720p with DirectX 11 enabled, with the "Medium" preset, the game stays around 25fps. It does dip lower during heavy action, and with how fast paced the game is, "playable" is about the nicest word that can be used. Using the "Low" preset it stays near 30fps, but still drops during heavy action. The indoor sections work much better, staying above 30fps consistently, but with so much of the game taking place outside, that's only so helpful. I was still able to play for 30 minutes or so and have fun. I'd recommend using a lower res if you want to ring a few more fps out of it. I had to set my desktop resolution to 720p to get the game to take up the full screen.

Skyrim - Great
At 720p, with no AA, and using the "Medium" preset. The only change to the preset was turning FXAA off. Outdoors fps stays very solidly above 30 during combat, around 40 just walking about. Indoors fps stays near 60, with some drops to 30 if there are many enemies in your face slinging spell effects. I was also using two summoned swords, which each have an image effect taking up a fair bit of the screen. Game played very, very well. This test was done with the power cord connected, using an external monitor and an Xbox 360 controller via a wireless receiver.

Splinter Cell: Conviction - Flawless
At 720p gameplay is flawless. Used the "Medium" quality preset, though I turned "Realtime Reflections" and "HDR Rendering" off. Tested several of the Deniable Ops missions, all play perfectly. Fps stays above 40 at all times, usually at 60fps. Didn't try any of the story missions because I've finished them all five times over, but a run through some of the arcade missions makes me think it'll handle the whole game no problems. Could probably go for even higher quality settings. The game will complain that Windows 8 isn't supported, but you can tell it to continue anyways and it works fine.

Payday 2 - Playable
At 720p with everything at minimums, performance is not good. It's around 20fps most of the time. It's playable, but not really fully enjoyable. You will need to google for and copy in a d3d9.dll to get the game to run on the Intel HD, it will not launch otherwise. I did play it for a few hours, and had fun, but it wasn't ideal at all. I'd say you can get by if you're really jones'in to play, but otherwise it's a game best served on a more capable GPU.

Resident Evil: Revelations - Great/Flawless
At 1080p the game works very well with all settings maxed. Around 30fps at all times, maybe a little less in the outdoor scenes with lots of weather effects and lighting, but otherwise works flawlessly. Played through a bunch of the Raid stages with my brother and didn't have a problem. Even smoother at 720p, but it looks and works great at 1080p so I left it there. Recommended.
Last edited: Nov 1, 2013
D

Great post. Me n you should ne buddies as I have tons of high demanding games on my pro1 like Crysis2 Maximum edition, DmC, Dead Island, Hard Reset, Deadlight, State of Decay, The Darkness 2, Prototype, The walking Dead, Influx, Outlast, Afterfall Insanity, Amnesia A Machine for Pigs, Brothers, Shank 2, Sine Mora, etc... all run great on my pro.

Looking for to you testing newer higher demanding games. Based on Anandtech tests, the new HD4400 is really about 50% more powerful than my HD4000.
D

I figured this would make a good first post. 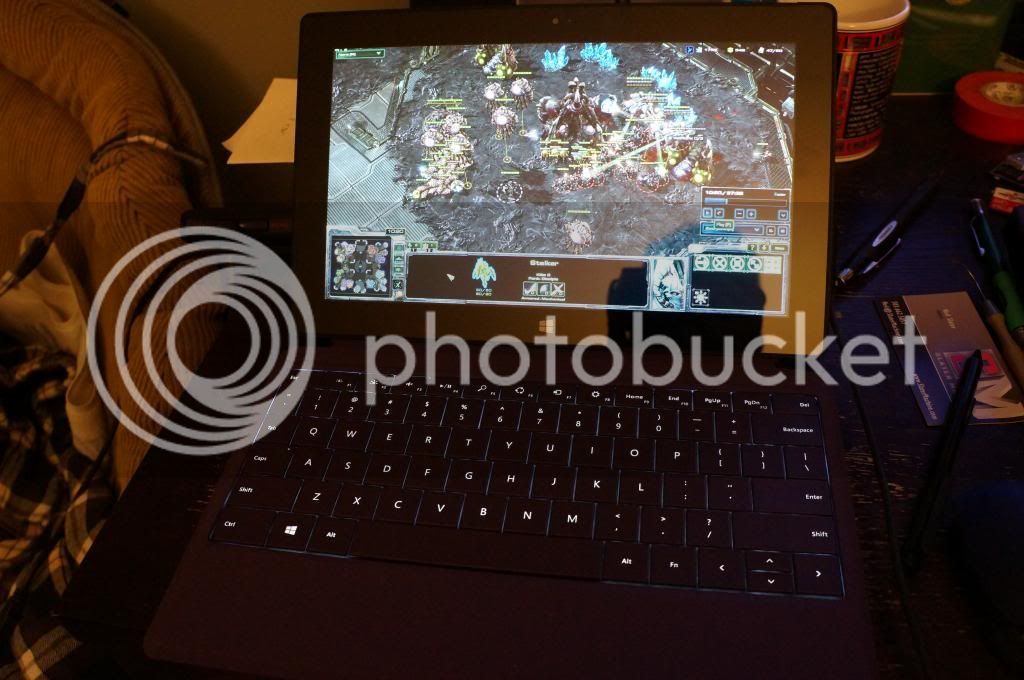 ALLCAPS said:
I have a desktop. With an i7 3770k, 660Ti, and 16GB of memory. You think I just had all these games lying around in case I got a computer to run them on? I didn't buy the Surface Pro 2 for games, but it'll be nice to use it for games.
Click to expand...

As long as people have reasonable expectations of a Surface Pro 1/2 for gaming and it's not their primary motivation for buying one, it's all good.

ALLCAPS said:
I have a desktop. With an i7 3770k, 660Ti, and 16GB of memory. You think I just had all these games lying around in case I got a computer to run them on? I didn't buy the Surface Pro 2 for games, but it'll be nice to use it for games.
Click to expand...

I didn't think that but your scenario is not improbable. I have only owned PCs and would consider myself a PC gamer. My background includes MMORPG and shooters such as TF2, CoD, Battlefield. I recently played 50 hours in the Battlefield 4 beta which reminded me the monotony of gaming.

How is gaming on the Type Cover in games that require quick response (i.e. League of Legends, StarCraft, MMO's, etc)?

Do you think you would have had similar results with 4gb of ram as opposed to the 8gb?

Anyone feel free to chime in on either question
D

This is great info. Thanks! I'm in the same camp. I'm not buying the SP2 with 8GB for games, but it is nice if I can use it to play games - and achieve improved performance over SP1 with 4GB. demandarin just posted the link to Anandtech. Off to read that.
OP
A

MoggSquad said:
How is gaming on the Type Cover in games that require quick response (i.e. League of Legends, StarCraft, MMO's, etc)?

Do you think you would have had similar results with 4gb of ram as opposed to the 8gb?

Anyone feel free to chime in on either question
Click to expand...

I used the Type Cover during these tests, mostly because I don't have a space cleared off to set the surface up proper yet. I don't recommend gaming with the Type Cover. It's working fine, but if the chips were down I wouldn't trust myself to not miss keys. I mostly have problems with hitting the trackpad with my thumb, and with no gaps between the keys it's hard to just feel your way to the right ones if you have to move them. It works alright for the most part, though. If I was traveling with it (which I will be) I wouldn't feel the need to bring another keyboard with me, but sitting at home I'd much rather use a full keyboard. That kind of goes without saying, though.

As for the 8GB/4GB, I really doubt that the 4GB model would perform any worse. Perhaps loading times may be a tiny bit longer, but even that is doubtful. I think both models will perform the same for games.

It doesn't ship for another 6 days, and I'm a little put off by some of the issues people on forums are experiencing so the SP2 is in the running again where I can go pick up the 4gb/128gb after work on Wednesday.

It will be mainly for surfing / Netflix / widi on xbox one, but gaming will definitely be on the table when I travel. Light gaming, but would be nice to have scalability to play select newer games on low settings if possible.
M


sockfish said:
I figured this would make a good first post.