Lenovo or Surface: Which do you recommend?

I figured i'd ask this question here(And on another forum I also frequent occasionally).

I am looking at the SP2 or Lenovo Yoga 11s. I have never owned a lenovo product before so I can't say much about their quality and customer support and all that good stuff.
I have owned a Surface RT so i know Microsoft has good quality products(from my experience).

I love the Surface but i remember being in the store and glancing at the Lenovo Yoga 11s and i love the crazy designs...It can be a laptop, it can be a tablet, it can be like a stand or even tent version.

It's a cool looking product and it has a slightly bigger screen at 11.6 inches and also runs full windows 8 as well.

From what I can tell it has the same/similar specs...it has a better webcam but i don't even cam like that as well as a full fledge keyboard(though i have grown accustomed to my Touch cover)

So would you recommend a Surface over a Yoga?

For me, I am a student and I'll soon be purchasing an office subscription with 365.

AS well as I enjoy reading with Nook & Kindle books....The Surface RT was my main reading tool and sometimes it can be a bit cumbersome using it to read but it wasn't too bad. Not horrible but i have also contemplated buying an actual Nook or Kindle for the perfect reading experience. I imagine the lenovo would be even bigger.

But do you recommend a Surface over a yoga or a Yoga over a surface?
M

You should be considering the Yoga 13 pro 2 with a much higher resolution, haswell, same weight (3 lbs) with a larger, 13" screen.

I did consider the Yoga 13 2 pro vs SP2 Pro. It was a tough choice but went with SP2.
I loved the original Yoga 13, but the Yoga2 had issues with displaying yellow (not sure if that was fixed) and some possible other QA issues.

I do love the SP2. It goes with me everywhere. It's heavier than most tablets, but it's so much more versatile. It plays most games very well if you like to game. I also like having the stylus even though I dont use it too much. It's a great option.
Last edited: Dec 30, 2013
W

The big thing to consider here is if you need support. Lenovo will provide excellent support while microsoft's support is sub-par at best.
G

Well i'm at the point where if I can't get a good Surface pro 2 AND I end up with a refund I'm going to look at the Thinkpad 12.5 Yoga. It's more expensive but it looks like it may work better for me. I keep this type cover attached most the time anyways so I guess I should have looked for something with a keyboard thats attached because you can get so many more useful angles out of it.

Also depends on what programs you will run... if it's just the office suite - I doubt you need crazy specs
OP
S

I think i'll probably stick with Surface...While I like the look and design of the Lenovo, i think the weight and bigger screen might be a bit uncomfortable to try and use it as a tablet and E-reader.

I think the answer's in your username

I originally bought the Yoga 2 Pro and returned it for an SP2. In the end, I'd say I made the right choice.

The Y2P does have a great display - but there is a caveat. It uses PenTile technology to achieve that resolution, meaning straight lines are impossible to achieve as the pixels are diagonally placed. I didn't know this at first, but I could clearly see that there were instances where things appeared fuzzy, and this was why...

Zoom in on the images and you can really see... Look at the edges of the green tiles from the start menu as they're easiest to see. Tell me which one is the SP2, and which is the Y2P. 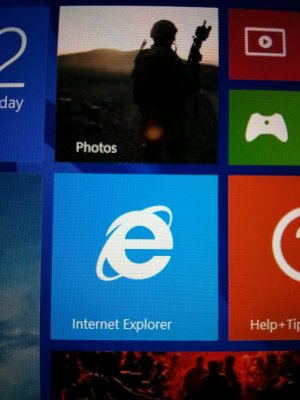 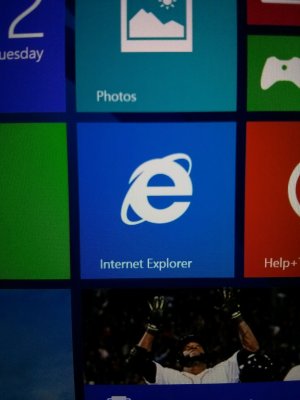 The SP2 is the first image, and the Y2P is the second. You can clearly see the Y2P having diagonal pixels which is not ideal. There were also issues with yellows on the display (Lenovo said this was a problem with software energy management) coming out as a brownish yuck. No idea if it's been fixed yet.

I tried using a great stylus, the Adonit Jot Pro, on the Y2P for OneNote. It didn't compare at all to the SP2's active digitizer in any way, shape, or fashion. This is what sold me for the most part as being a student. I haven't had the chance to use it in a classroom yet, but I used it to complete some military upgrade training. I had about 1000 pages between 4 PDF's to study.

I conquered it using the SP2 and OneNote. I pulled pages, made my own tests, cloned them and made an answer key. Highlighting and note taking on the PDF pages were beneficial beyond belief. Everyone who saw me doing this was in awe of its usefulness. I took and passed the test with a 93 in about a month where it takes most people several months.

The other big thing to consider is form factor. The Yoga's are laptops, and the Surface is a tablet. Yoga's work well in your lap where the Surface is difficult. The Surface wins in portability though for me... but there are times where it would be better to have the stability of a laptop when you aren't at a table/desk.

The only other thing I can think of is the Yoga having somewhat better speakers, the larger display, and slightly better processing power - BUT... I noticed in benchmarks (this may have the same effect in demanding games) that the Y2P would throttle a lot sooner/harder than the SP2 causing it to run slower. So much for that i7... I had the i7, 256 GB SSD, and 8 GB of RAM model. I went with the 128 GB SP2 and just use a USB 3 flash drive and portable HDD (the My Passport Ultra is FAST) when needed. Homegroup makes it very easy to collaborate between your PC's on a network (I'm going to take a router with me to school to make my own).

Final tidbits... I do play a couple games on my SP2, including BF4. It doesn't run the best, but other games (Wargame Airland Battle, World in Conflict, CS/L4D for instance) work well enough to be easily playable. I also opted out of the touch/type cover experience... I picked up a Logitech K810 for $50 and it works wonders. Better too in my book since I can put the keyboard anywhere and not have the extra bulk when I don't want it. When gaming, I use an Anker USB hub with a mouse and my HDD plugged in. Works fine... and I also use the DisplayPort out (converted to HDMI and/or DVI) to play or watch movies on other screens without a problem.

I think that's about all I've got. I'm happy with my SP2, and believe I made the right choice.

I picked Microsoft because I thought: If anyone wants their device to work, it's Microsoft right now. Their own software will always run perfectly on their own hardware. Well, to be honest, I think I'm right. I know a lot of people are having issues, but I'm not with my device. I'm using it pretty much like I always do, but just in case, sometimes I'll walk over to my device with it's cover closed and in sleep or hibernate and microsd card in, and touch it just in case to see if it's getting warm (and knock on wood, it isn't).

I have a Lenovo laptop and it's fantastic. I think Lenovo makes great devices! So I don't think you can go wrong with your decision. But I wouldn't go for that specific Lenovo tablet you mentioned. It doesn't compare to the Surface Pro 2. It's like comparing a store bought, pre built PC for gaming for 400 bucks and then a custom made one for 1,000. You'll see some big differences between them (besides the price tag). It always drives me mad when I see people compare an iPad to a SP2. Essentially an iPad is a giant iPhone with little difference between, ergo, they're comparing a giant iPhone to a full blown PC! Mind boggling!
You must log in or register to reply here.