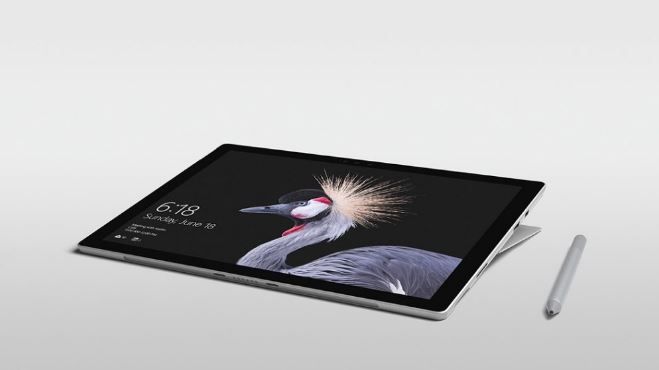 "The Surface team never stops growing and learning" said Panay. "We listen to our customers, asking them what will help them better create and be more productive. Their input guides us to discover and build new ways to streamline and enhance creative processes – helping people use one device instead of two, eliminating the need for pen and paper, removing barriers so their ideas can flow freely."
Click to expand...

The “beautifully crafted” new device is “the lightest, the best sounding, the fastest…the quietest,” Surface Pro, according to the launch video from Microsoft. It has 13.5 hours of battery life, which is 50% more than a Surface Pro 4 and 35% more than an iPad Pro. LTE Advanced, Windows Hello, a “next generation” hinge, and Studio Mode. Microsoft says that the LTE Advanced will be available "in units shipping later this year," and according to The Verge, these models will support micro SIM and eSIM and will cost slightly more than the non-LTE models.

The all new Signature Type Cover comes in three tone-on-tone colours: Platinum, Burgundy, and Cobalt Blue Alcantara. The improved keyset is designed to produce a laptop-type experience, combined with the soft-touch of the material.

At 1.7lbs and 8.5mm thin, the Surface Pro is the lightest ever Surface Pro.

As far as the 7th generation Intel Core processors are concerned, the Core m3 and i5 devices are both fanless, with the i5 being the first ever of its type to boast fanless architecture. Even the core i7 runs at just 18dB.

The “next generation” Surface Pen, which is also compatible with older Surfaces, has 4096 levels of pressure, and tilt sensitivity.

The 12.3-inch PixelSense Display has 267 pixels per inch and 3:2 aspect ratio, which is 50% more pixels than a 12" MacBook. With the colour-switcher you can switch to enhanced colour from SRGB in a flash.

It will also be the first laptop to support Dial, which has until now been exclusive to Surface Studio.

The new Surface Pro and Type Cover is available to pre-order today and will ship in 26 countries, including Japan, the UK, the US, Australia, Taiwan, China, and Hong Kong, on June 15, with prices starting at $799 USD. The Surface Pen will be available in the coming weeks.

Staff member
Looks like a nice spec bump to me. I do like the look of the slightly rounded edges on the bezels, always thought the surface was a little sharp-edged for a tablet.

LTE is a great option in my opinion, but just wish that the providers would stop being such greedy sods! On my phone sim I get unlimited 4g, unlimited texts, and 700 minutes for £17 a month. For a tablet sim from the same provider, no texts or minutes, only 20gb of data, which let's be honest, is nothing, and it's £15 a month. There is a reason there is so little interest in LTE equiped tablets, they make no sense for the vast majority, yet I'm sure they'd jump at the ability if it were feasible.

In the US technical specifications, it doesn't say which models have LTE or is there LTE at all.
OP
M

Exhile said:
In the US technical specifications, it doesn't say which models have LTE or is there LTE at all.
Click to expand...

I've just seen that they've said it will be "shipping in models later this year" so will amend the report to reflect this.

Maura said:
I've just seen that they've said it will be "shipping in models later this year" so will amend the report to reflect this.
Click to expand...

The only way I'll think about moving from my SB to this is if I can get one with LTE as it would be great to not tether as I find myself doing that several times a week!

Go get them
H

Staff member
Just noticed that it no longer comes with the pen as standard. Seems an odd move.

The media is still going crazy about no USB-C, but I personally could care less about that. I believe its a standard that isn't a standard since what works or doesn't with it is a mystery. I've been looking at an Acer Switch Alpha and it has a USB-C port... some charges work with it and some don't. That's not a standard. So sure it would have been great if it had it, but I'm not going to decide not to buy something that is good just because it doesn't.

That out of the way, I see a lot to like in the new Surface Pro. First, the battery life getting better by 50% is huge. I don't expect it to really get 13.5 hours as spec'd, but if the old one was supposed to get 9 and people got 5-6, then the new one should get 8-9 which means it will likely get you through a work day or plane trip, as long as you aren't doing something crazy.

In the brief time I had my SP4, I found that the edges were a bit uncomfortable because they were two sharp; when holding it as a tablet for a long time. So smoother angles on the edges is another one I am in for.

I do wish the pen was still included, but pushing the specs up on it is a good move. For the dial, I wish they had come out with a dial that was about half the diameter for the Surface Pro. Its a cool option but takes up too much real estate on-screen for a screen this small. It can be used on the desk too, but a smaller one would be a great addition for them.

All the other refinements are likely to make the total Surface Pro experience more refined. My experience with iPhone "s" models is that they are the best ones to get because there are a lot of non-flashy improvements that polish the experience.

The one thing I'm not sure about is the fanless i5. Are they using the liquid cooling thing like the Acer Switch Alpha, or just going naked i5 under the covers with no fan? If I read correctly, the i5 model is slightly lighter. So I'm guessing its just simply removing the fans.

I'm glad it still uses the same dock and chargers... and yes, USB cables. It means that moving to this requires no new dongles.

The real question will be how buggy the firmware will be when it first ships. This is one area Microsoft seems to struggle with.
H

Staff member
Fully agree. There just isn't a need for usb-c for the vast majority of users right now. It is worthless to me and as with everything, all the complaints, well it's from a vocal minority. I imagine that the vast majority of the public don't even know what it is other than that it charges a phone or macbook. Does anyone here actually have any usb-c peripherals?

I read that while the pen is not included, the price has been dropped to reflect it (compared to the SP4 price). Maybe so like with the keyboard, you can opt for the colour you want. And that was also my first reaction to the surface dial. Looks useful, but way too big. I appreciate that a larger dial will offer more accurate control, but not at the expense of that much real estate.

So tempting! I've been holding off for so long... hmmm...
You must log in or register to reply here.

May 9, 2017
BubbaUK
B
M
Details and Images of Surface Pro Refresh Leak