Moko slim-fit cover for the SP is finally out

I've got one for my kindle fire and I really like the way it holds and protects the corners without getting in the way elsewhere. Says it is compatible with touch and type covers, but don't see a picture of it all folded up together. Looks "lapable". Lots of colors (always afraid of leaving something small and black behind in a dark hotel room.). Amazon.com: MoKo Slim-fit Type / Touch Keyboard Cover Companion Sleeve Case for Microsoft Surface Pro 10.6" Inch Windows 8 Tablet, Carbon Fiber Light BLUE: Electronics. p.s. Do not see a pen holder.
Last edited: Jun 16, 2013
R

Please update this topic with a review when you get it.

This is so much better than the manvex case that has been bronzed on this forum.:LOL:
OP
N

I ordered it and a pen holder (seller said there was not one - use the magnet (makes you wonder if they actually tested their prototype.)) Certainly can be colorful. I think it will have to be on the lap desk to use on the couch with a keyboard.

i never was a lap typer.... if i use the SP on my lap it is in tablet mode without the KB. Well looking forward to the review with Pics.
G

Purchased this two weeks back. Chose the red one, since they only had the black and red in stock on Amazon. Been looking for a similar case like it for a while, but it was very pricey (40 UK pounds). Due to the price, I was tempted to try and return if I didn't like it. In the end I decided to keep it, purely because I couldn't be stuffed returning it. I have the other Moko rotating fake-leather case for the SP and I can say this is better, but it doesn't allow me to fold the type and touch cover back, which is annoying.

Fit's the touch and type cover perfectly though, but you can't fold the keyboards back. I'll post some pics shortly.
G 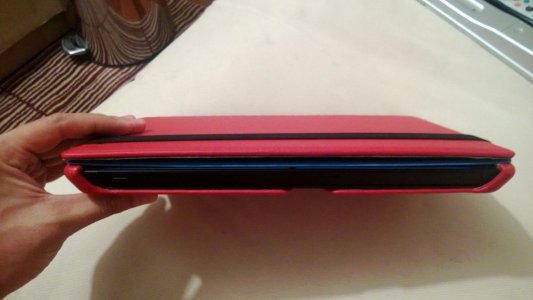 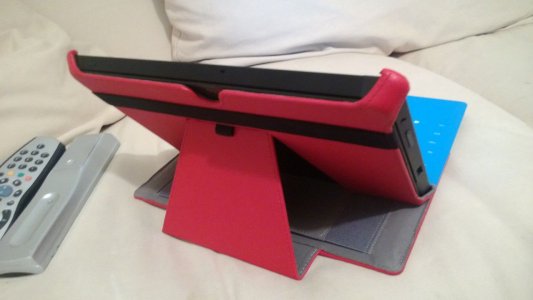 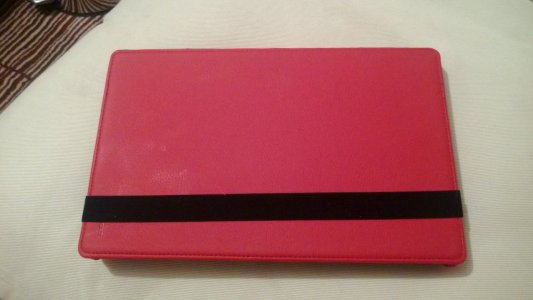 Thanks. You mentioned that the Covers - Type and Touch - cannot be folded back. So, what happens with the covers when the case is on? Do you have to carry them separately?
G

When closed the case will fit the touch and type covers. I've tested both. When I say folded back, I mean when you want to use the SP in tablet mode, so you fold the keyboard back. In this scenario the covers just detach, because you can't fold them fully back. Its exactly the same as the manvex and moko rotating case.
Sent from my RM-821_eu_euro1_276 using Board Express
G

In my first picture, you can see a blue touch cover folded with the case cover closed. Hope that helped. Oh, and strangely there is a pen loop on the rear of the case (or I think it is). Its a strange location... You can kind of see it on the second picture, look at the hinge in the middle of the back - there is a small black loop visible. It fits the stylus... I think its a pen holder, its just in the weirdest location and I won't be using it.
Sent from my Lumia 920 using Board Express
OP
N

The seller told me there is no pen holder. I saw the loop in the middle, but couldn't figure out what it was for. I added one of these on the side: Amazon.com: Leuchtturm1917 Self Adhesive Pen Loop Notebook Accessory: Office Products I find I can use it on the lap, and with the lap 'n go lap desk it is even pretty good. The stand hinge allows a lot of cover movement when closed or folded back wit and without the type cover, so I find I have to use the elastic band to close it, unlike other covers. I really like how it exposes more SP surface to cooling, because my SP can get pretty warm.

The cover is so thick that your keyboard is going to bounce like mad when you type.
You must log in or register to reply here.