Sun Carry It: A game made using just the Surface Pro(Must read for potential buyers).

This is not an advertisement although if you want to check out my new game it's available at the Windows App Store for free.

The game is called Sun Carry It.

Link to game:
Sun Carry It app for Windows in the Windows Store

As a developer:
I'm a 1 man team looking for feedback but more importantly my experiences using the Surface Pro.

I have to tell you I've owned many tablets from android to IPAD, to HP slates, touch pads, and even the Surface RT, but nothing comes close to the Surface Pro.

Being a developer I have installed the Windows 8.1 Preview and I have to tell you it's pretty sweet.

But this is more of my experiences using just the Surface Pro to create this game.

First here is my setup! (Please forgive the mess) 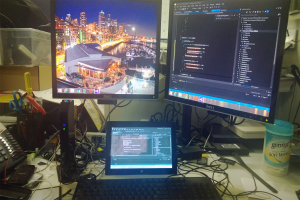 The dynadock i feel is a necessity especially if you want a dual monitor setup. Dynadock comes with 2 USB ports in the front, 4 USB 3.0 in the back, a Gigabyte Ethernet port, HDMI port & DVI Port, headphone and mic jacks.

The dynadock will then connect to the surface via USB, In an instant both monitors are setup to extend the desktop.

Anyway back to my experience:

To be able to code my game on a tablet is insane. Using the type cover at first became a learning process due to the size of the keys and the overall layout but it didn't take long before I was typing away like norm. I would be lying if I told you I was typing at my normal speed, but I am close.

Visual Studio is very important to any developer coding for Windows Phone or Windows Store apps. I was very happy to see that screen size is perfect. 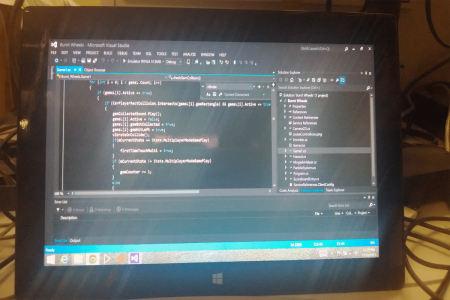 Experience's when commuting:
I work in Manhattan and I live in Brooklyn, due to personal reasons my commute involves me taking the express bus instead of the train.
My commute is about an hour each way. During my ride I can pull out my surface attach the keyboard and start coding again or so at least I thought I could. I came to the conclusion that because the kickstand is positioned a certain way, It's feels a bit awkward to have the Surface on my lap.

This cause me to detach the keyboard from the Surface and just have the device in my hands. Which isn't a bad thing but you will not be coding since in Visual studio pressing on a white space will not bring up the virtual keyboard. I can do this manually but it became more of a chore than anything else.

Eventually it all worked out. I can code during the day and on my way home test the changes that were made and even make small changes if something didn't feel right. This routine is perfect!

FREEDOM!
This is just it. To be able to do anything you want on the go, It's brilliant!
Textures didn't look right just fire up Photoshop and make real changes using the full version.
Certain sounds that I thought were to low I just launch audacity and make the changes.
My game uses Microsoft Azure, thanks to Windows 8 superb multitasking capabilities, I can log on to my portal make quick changes swap back to visual studio start a debug session and see it all in action.
If i'm not coding, I'm doing other things. It's a downer the Surface did not come with an on board 4G/LTE radio but using my Lumia 920 I'm able to tether to the Surface.

Internet Explorer is awesome the ability to read to articles at the same time adjusting the page sizes is just insane. 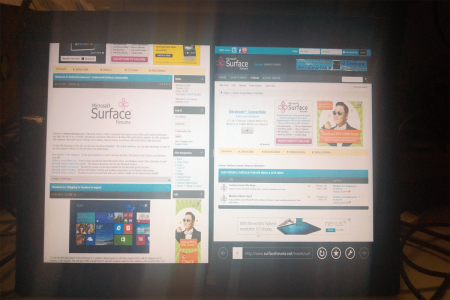 Absolutely this is the only tablet available(well besides other windows 8 tablets) that will allow you to do whatever you want! It's not just a sexy looking web browser or a blown up version of (your favorite cell phone). This is a tablet with the ability to be become your primary computer and tablet! I'm not a person who cares too much about apps but the app store is growing everyday.

Surface Pro is even better with Windows 8.1
Native Mira-cast Support: If you don't know what Mira-cast it's feature where you can display what's on your screen to a compatible display via wireless. New TV's come with this feature as well as projectors etc.

You have an Xbox 360 - Any video whether it's you tube or a video in your browser or a movie saved on your desktop. You can actually select your Xbox in the PlayTo device settings and stream that video straight to your TV screen.

There's more features that come to mind but this read will be longer than it already is.

Do not listen to bloggers that are trying to compare an IPAD to a Surface. Majority of bloggers already made up their mind about their(favorite tablet) instead of actually doing factual comparisons.

There are not allot of short comings:
Battery life can be a bit better.
Make the damn thing lighter.
Make it more comfortable to hold in your hands.
Add LTE/4G support.
Make the kickstand adjustable;

As of right now that's all my complaints about.

Please let me know what you all think.

2 things your wires look like a fire hazard waiting to happen, and the adjustable kickstand will gain you a huge applause from a few peeps here. Games looks good. I will check it out. Oh yeah- Kasabian- nice touch!
OP
L

Yes I love the kickstand they just need to add the ability for us to adjust it's angle on how we want it.

You are so right. It's funny I didn't notice the real hazard until i saw the preview to my post. I'm cleaning as I type this. Aha thanks on the Kasabian I never heard the song until i finish watching the last season for Nikita. I was like wow I gotta purchase the song! Thanks for your kind response!

Very interesting description and an even more intriguing setup. One question: With 8.1 can you have two Modern UI apps on the two external monitors?

kristalsoldier said:
Very interesting description and an even more intriguing setup. One question: With 8.1 can you have two Modern UI apps on the two external monitors?
Click to expand...

YEP this has been covered...I normally have 2 plus a desktop app snapped on each of my 2 external monitors each day I work. So much better use of the Ext monitors than in 8.0. My only issue is my Display link driver is in beta and I can only get touch to work in one of the 2 external monitors....if I boot back to 8.0 I still have touch in both. weird
OP
L 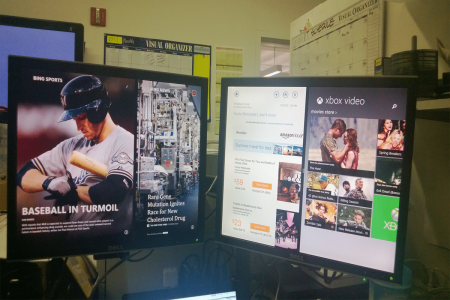 Very weird may I ask which Display device do you have?

I have two monitor set-up connected to my desktop machine (yeah..,.my laptop suddenly died on me but lets not get into that and the sudden hole that appeared in my wallet!). One is connected via HDMI to the tower, the other via VGA (this will get changed later). But the monitors are not connected to each other.

I have two monitor set-up connected to my desktop machine (yeah..,.my laptop suddenly died on me but lets not get into that and the sudden hole that appeared in my wallet!). One is connected via HDMI to the tower, the other via VGA (this will get changed later). But the monitors are not connected to each other.
Click to expand...

Yeah my thoughts also, but in my whoo's search the forum for my Dell thread someone suggested this set up which worked. Either way the Dell requires the usb attachment for touch- I could just go the usb route minus the dp to hdmi(sorry forgot that part) but I get all kinds of blurry issues minus the DP.
You must log in or register to reply here.

W
Is Surface Pro taken seriously as a tablet?

T
Has anyone tried any old Point and Click adventure games on Surface Pro?

W
MUST I have a Live account to use the Surface Pro??