Before reading on, please be sure to check out my previous Surface 3 articles, which should provide a complete background on what’s happening with this release. These include:

Now that I actually have the device in-hand I can do some testing. But here’s what I’ve noticed right away.

Thin and light. Like Surface 2, Surface 3 is wonderfully thin and light, and regardless of which PC you’re used to (assuming the same sized screen or bigger), it’s amazing how light the device is.

Power. The trapezoidal microUSB power connector can only be plugged in one way of course, but it’s easy to plug in and impossible to plug in incorrectly. This is a big win.

Performance. This will require time, of course. But it’s not difficult to perform some (admittedly non-scientific) app launching tests side-by-side with Surface 2, in this case simultaneously launching apps I’ve never run on each. Put simply, Surface 3 launches Modern apps faster than Surface 2 every time. For example, Weather—7 seconds vs. 9 seconds—and Pictures (1 second vs. 2 seconds). These are literally first time ever app launches, so I will install Office and other desktop apps and see how it goes. But the initial prognosis is that I see nothing troubling. Yet.

Type Cover. Thanks to the smaller size of the Surface 3, the Surface 3 Type Cover is smaller overall than that of the Surface Pro 3. But the keys and keyboard on the Type Cover are just about the same size, and if Microsoft hadn’t told me they were a hair smaller, I’m not sure I’d have noticed. What’s different is the layout of that top row of function keys. On Surface 3, the Windows 8-specific keys (Search, Share, Devices and Settings) are gone now, which is fine. And there’s a dedicated Print Screen button, plus Insert, which is fantastic. The trackpad is a bit smaller.

Older Type Covers. I tested previous generation Type Cover 2 and Touch Cover 3 keyboard covers, and they work fine. When you cover the screen with such a cover, there’s a bit of bezel uncovered, but I don’t think most people will mind. Power Cover doesn’t work (in that it can’t power the tablet).

Volume buttons. This is the first Surface to put the volume buttons on the top. This was necessitated by the Docking Station, because the wings on that peripheral cover the sides of the tablet.

Surface Pen. When you buy a Surface Pro 3, you connect Surface Pen to the tablet during Setup. But because Surface 3 does not come with Surface Pen, this isn’t available, so you need to connect it manually in PC Settings later.

Crapware? This is a bit odd, and will be a bit controversial with some: Surface 3 ships with … crapware. It includes the Surface app, which is of course fine, but also third party apps like Drawboard PDF, Flipboard, and The New York Times Crossword. I’m not sure how I feel about this, but of course you can easily uninstall any of them.
​
IMO these apps are not crapware but demonstrate using the Surface technology in apps. Maybe some others sill get motivated to build a quality app worthy of including next time.

I should probably post this in his comments section as well, but regarding the "hard to find" pen loops- they're not.

Us guys that started with the SP1 (which did not come with the loop at all....) learned this trick before Microsoft did. Go to Amazon and just plug in "pen loop" and you will find the exact same thing that MS uses, in a myriad of colors.
M

saw one at the MSFT store this morning. my impressions as owner of a Surface 2 & Surface Pro 1/2/3:

* MUCH better for portrait/tablet usage. looks/acts like an ipad. (SP3 is a bit big, and all SPs are too heavy to hold one-handed).

* screen feels a bit small for laptopping, just like S2 and SP1/2.

* nice to see the charms gone from keyboard so that a mute button and play/stop button are there. still want volume controls.

* keys are narrower than all other keyboards, not good

* apps booted up much faster than my Stream 7 (also Atom, but different one) but of course not as fast as any SP but you wouldn't expect that. glad to see Office launch quickly.
OP
G

Staff member
http://www.anandtech.com/show/8666/the-apple-ipad-air-2-review/3
PCWorld First Look with a couple benchmark results.
http://www.pcworld.com/article/2906...indows-and-a-new-cpu-cut-the-compromises.html
Note: As posted elsewhere the S3 keyboard keys are just a bit smaller to accommodate the width reduction although feel enhancements make this the best Surface keyboard yet.

What everyone wants to know... 3Dmark (a balance of Graphics and CPU test) 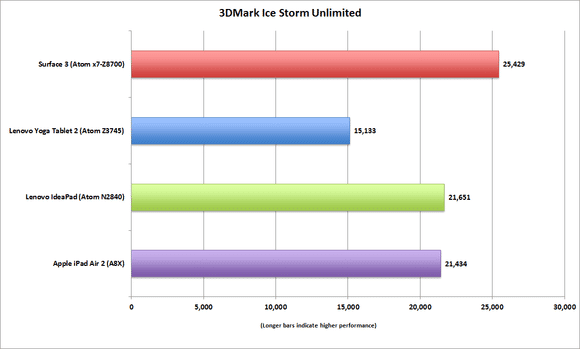 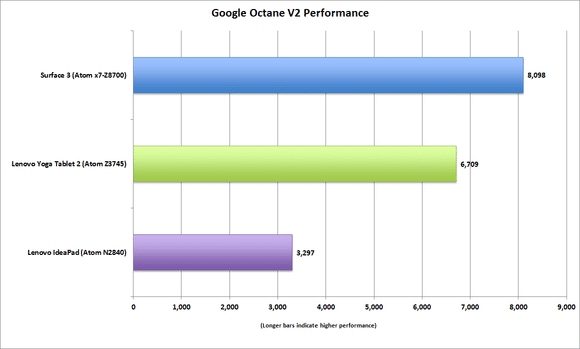 Geekbench Single Core 32 bit
We ran Geekbench 3’s single-core performance load, in 32-bit mode to improve compatibility with the prior-generation Atoms. The Surface 3 outpaced all the older devices, though nothing could keep up with the iPad Air 2. 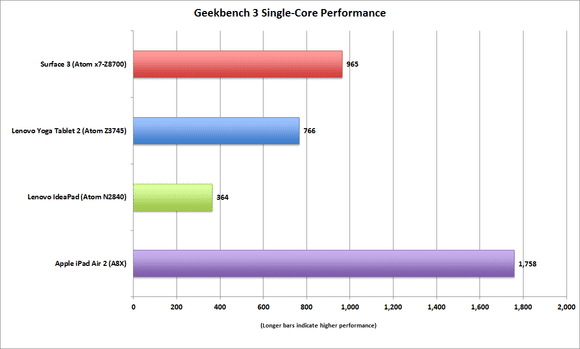 *It's not unheard of for vendors to optimize for benchmarks and this may be the case when off the chart scores don't hold up in other testing.

These results should be viewed as preliminary, the Anandtech testing is typically a bit more thorough. However the Surface 3 showed respectable numbers here and Microsoft is known for tightening up the performance after launch.

I'd like to see those tests Vs the other models of Surface.
You must log in or register to reply here.

Solved Got the first real issue...start button while charging...