I've had my Surface Pro 2 256/8 since release and all has been fine until (possibly) the firmware update.

Turbo Boost was working fine and the CPU was going up to its maximum of 2.6Ghz but it is now seemingly capped at 2.23Ghz.

I've checked in PC Settings, Task Manager and CPU-Z, the maximum that the CPU ever reaches is 2.23Ghz, as indicated.

Anyone else experienced this? I have tried all power profiles (Performance, balanced, Power Saver and there's no difference).

It's all in your head, if in doubt... system restore. I did a couple of times we are just being picky.

Just checked on mine, works fine up to 2.6GHz, and I have all the latest updates.
OP
R

Thanks for the replies..

I've attached some images from PC Info and Task Manager, it's definitely 'not in my head', and I'd rather not have to do a restore as my Surface is used heavily for work and I don't currently have the time..

Any other ideas would be welcome, along with any others who have experienced this issue. 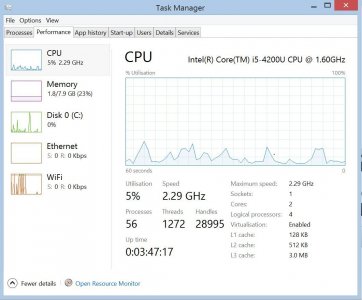 I was curious after your post, so I checked on my 256 SP2 as well.... and sure enough, Windows is reporting the CPU as a 2.30 GHz, and Task Manager is showing a max speed of 2.30. However, when I load HWiNFO64, which I use for all sorts of useful monitoring, it is showing the following:

So, it appears it is simply the way that 8.1 is detecting the CPU speeds. While keeping the HWiNFO sensors loaded and trying multiple task or games, both core #0 & #1 both hit 2595Mhz, which is 2.6GHz. Oddly, task manager only sees this as 2.3Ghz during this same time.

As I type this on high performance mode with several tabs open, I'm watching the cores bounce around between 798-2595MHz.

I wouldn't restore at this point for this issue, you should be just fine. If you want to monitor them closer during actual use, along with anything else you might want to watch, I highly recommend installing HWiNFO 64, it's updated regularly and is free to download and use... I've used it for years on all my machines.
OP
R

Thanks for the heads-up on HWiNFO64, hadn't used it before..

Did some testing using this tool, Prime95 and StarCraft 2, it appears that I also have the same indicated values - specifically Turbo 2600Mhz, but this value is never reached, even in high performance mode. It seems that the ThermMon kicks in and limits the ratio at x23. It occasionally pops up to x26 for a millisecond and goes back down, with ThermMon indicating 'Throttled' for that brief moment.

Perhaps this was an additional battery saving feature added to the firmware update or maybe it's an Intel Turbo Boost modification to keep the temps down. At any rate it's good to see that it does attempt to reach the maximum clock and gets held back by thermal monitoring. 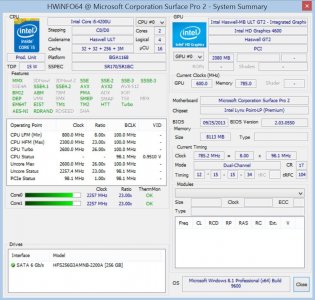 Reefa said:
Thanks for the replies..

I've attached some images from PC Info and Task Manager, it's definitely 'not in my head', and I'd rather not have to do a restore as my Surface is used heavily for work and I don't currently have the time..

Any other ideas would be welcome, along with any others who have experienced this issue.

I've got the same machine and have updated everytime there si something new to update. Mine is a tad bit better. Mine is 2.30 GHz. Until you made this post I would have never thought to look at the Performance tab in Task Manager like you did so I have no idea what it would have been when I took it out of the box a couple weeks ago. I'm very pleased with it's performance at anyrate.
P

That's right, the GPU Intel HD 4400 is a variation of intel HD 4600 low voltage, the only difference is in a lower frequency, designed so the ultrabooks / tablets.

Greetings.
You must log in or register to reply here.