None of Office 365 products work correctly. The minimise button works sporadically, the maximise/restore down button does not work at all. The close button sometimes closes the Office app, sometimes hangs the machine until something else is pressed ...

Outlook in particular is almost impossible to use. In effect, each email opens in full screen and closing it loses the main Outlook window so it has become a one-time-use product each time its opened.

The Edge browser on the Surface is much slower than on the PC and gets stuck regularly. No spinning circle, just nothing happens.

The right "mouse" button hardly works at all.

I can't find the really useful Search tool that I depended upon in Windows 8. If I had a Search tool maybe I could find it ...

Unless someone can give me hope that these things are known about and are getting fixed, I have to revert to Windows 8.1 because I can't work like this.

Longer term, even if these things are working, the tablet and touch concept of the Surface looks compromised. And as a senior IT professional I've been responsible for the purchase of hundreds of Windows mobile devices (phones and tablets) over the last two years. If I were looking for a new device today, I don't think a Windows 10 mobile device would get close to my buying radar.
H

Staff member
With regard to Edge, this is a known problem. Supposedly something to do with flash or java or some such. Maybe have a look here http://www.surfaceforums.net/threads/windows-10-and-battery-life.16341/unread

despite the couple of comments blasting the notion, this is a fully understood process, and is in no way some kind of hack, it is a feature built into windows, just one that few know about (I only learnt of it a day ago)

As to office 365, i'm just installing it now on my S3 to see if I can duplicate what you have experienced, i'll post back when it's done.

I have absolutely no issue with right mouse click (are you talking in general or with the type cover?)

To search, just press the start button and start typing. Or alternatively you can use Cortana, that is rather what she is there fore, a personal assistant (not that I need one of those)

As to general tablet interface, it will be improved, it's still rough around the edges at present and missing some important functionality, but it seems it is a divided camp, as it will always ben when there is a major system overhall. Personally I absolutely love tablet mode compared to 8.1, now I actually have a regular windows computer that works with touch, instead of having to ump onto essentially a completely different OS that is like android or apple, dumbed down and lacking on features. Now I have a touch machine that still functions as a real windows machine
G

Staff member
I will say I used W10 on a laptop first and was unimpressed. It's one of the ubiquitous 1366 x 768 resolution screen laptops which flooded the market over the last n years. I think the resolution is too low for W10's design and it does look better on higher resolutions. However I still don't like the basic design which to me resembles a 1990's ish Unix system. it's like a box of bugs or lifting a rotting log in the forest... bugs crawling out faster then you can recognize them. Hoping Win Ten Ten (Windows 10.10) comes to the rescue by July 2016.
H

I've installed 365 onto my S3 and I cannot replicate anything you have experienced. Open, close, minimize, resize etc all work just fine with office products, and having added my gmail to outlook, it works just fine. Emails do not open full sreen. Mine looks like this, just how i'd have expected it to. 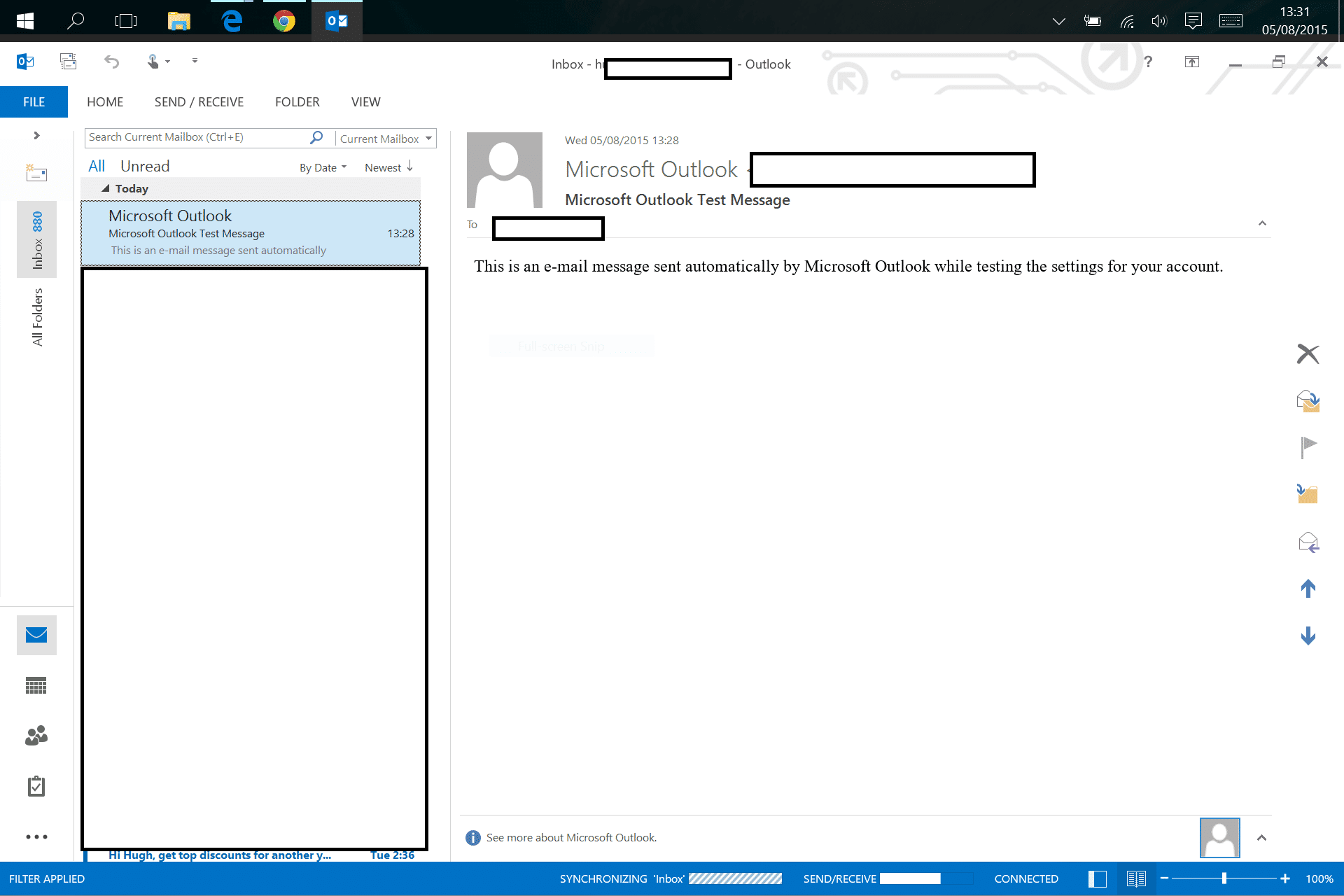 I've installed 365 onto my S3 and I cannot replicate anything you have experienced. Open, close, minimize, resize etc all work just fine with office products, and having added my gmail to outlook, it works just fine. Emails do not open full sreen. Mine looks like this, just how i'd have expected it to.

Thanks for trying. I think I get as far as you do if that is the preview window. If I then click on an individual email, instead of popping it out as a separate window it opens full screen and the control second from right alternatively labelled maximise and restore down doesn't work to "reduce" it. The rightmost control X does "work" but it closes Outlook and not just the email. The behaviour is the same opening Word documents and Excel.

Ok, I now understand why I can't find the search ... my Start button does not operate at all 90% of the time. When it does, it looks great ! But it's inactive most of the time.

Right clicking is sporadic, again maybe 90% of the time not working. By not working, I mean it does not produce a drop down menu of options. So, highlight some text, right click to select copy ... but nothing happens most of the time. When it does work, the whole screen refreshes first so very jumpy.
F

I found that if I wanted to click the minimize button in office, I would need to click slightly higher or slightly below the button. I can actually use the touchscreen with my fingers to hit the buttons rather easily, which is one of the few if not the only improvement on the tablet with Windows 10, but with the mouse, I found it's not aligned properly.

I had no issues with a non responsive start menu, but it's certainly a very common issue.

If you run in tablet mode, there is no search as far as I can tell. You will have to swipe in from the right, switch out of tablet mode and then when you hit the windows key, you can start typing. What a huge step in the wrong direction.
H

Staff member
Sounds like it would do you well to reinstall windows 10. Many users have had bizarre problems cured through such an act. silly, but it's how it is at present.

And no, that's not the preview window, I just used paint to blank out all my personal info and emails. I jumped around the inbox for a few minutes before posting and it worked just fine. Nothing popped up full screen etc. Just had another look, and I think what might be confusing you is that there is no new window when opening an email. It just opens within the same window. Once you have read an amail, there is o closing it (the X will close outlook because that's what it is for) you either take your eyes of the screen, open a different email, or close outlook. This is the first time I've ever used outlook, but i'd have thought there would be an option to open an email in a new window so that you could compose while reading a different email etc without having to start a new instance of outlook
U

Win 10 on Surface Pro 3 is a huge step backword. I went back to Win 8.1 within 2 days.. You have only 30 days to change your mind. Do not have time to t.r.y. out things. I need something reliable..

Well...I upgraded my S3 and SP3 to Win 10. While the S3 took to W10 very well, the SP3 was another matter. It took me a number of times to get it right - yes, I was upgrading from within W8.1. Anyways, having done all this now successfully, my initial orientation towards W10 was ambivalent. I thought - and still do think - that the tablet interface (this is all that I use on the S3) is a step backwards from the tablet interface of 8.1. The vertical scrolling by itself is not the problem but MS restricting the number of apps that can be set side-by-side is a baffling.

On the desktop side (which is how I am now using the SP3), in my opinion, things are much better. I do like the new Start format which involves tiles. I think it works very well actually (well, at least, for me)!

Yet, as much as do like all of this, my W10 experience was not very good. Rather, I should say, it was not as I expected it to be. I thought (and still think) W10 - at least in the condition in which it was released - was a bit incomplete and I was dreading waiting till Oct which is when MS is slated to release a major update with further refinements.

However, today I received a Cumulative update for Windows. Post the installation of this update, I find that the OS has stabilized a lot more than what I experienced when I first downloaded it (particularly on the SP3).

Some irritating niggles (for example, Cortana not working properly) seem to have automatically fixed themselves. And the system seems quieter and cooler. I am now testing out the impact on battery-life. Of course, I still maintain my opinion about the tablet interface. Let's see if MS will modify it in any way come October.

Cheers!
You must log in or register to reply here.