Anyone besides me ever own a UMPC

For anyone thrown by the acronym it stands for Ultra Mobile PC. I bought one back in '06, a Samsung Q1. It may have been one of the worst tech purchases I've ever made. It was 7", which wasn't all that bad at the time but slow was it's middle name. I used it maybe 3 times a month for 5 months or so and picked it up one day and couldn't power the screen up. It was so bad I chucked it into a trashcan and never looked back.

That was a big time waste of money.

Ha! I have been playing on my wife's Fujitsu LifeBook U810 all day today. The first time it has been used in a couple of years. Completely the opposite experience though. She got it for business school a few years ago before the netbook craze and long before tablets and it was by far the best highly portable option. At the time the thing blew everybody's mind and nobody could figure out what it was. It was expensive at the time and about 18 months later net books were doing the same thing far cheaper, but there was nothing that came close to it in the beginning.

The wife needed to sign a document and this has a resistive screen and stylus so it got pulled out since it is perfect for that sort of thing. I went ahead and did the 8 gazillion updates to it. Really what I have been thinking though is it would be great for Windows 8 considering the tiny screen, tiny keyboard and touch input aren't great for Vista which it currently runs. Even though it doesn't have the best specs for Windows 8 I can't help but think that would be the way to go.

What do you all think?

Here is the obligatory pic. Although this is from Google we took one just like it because you have to to show everybody the size. 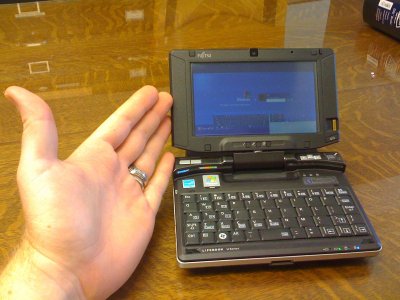 And for the nerds, some proper specs:

It is one of the world's smallest convertible touchscreen notebooks.
OP

Yea, I think your Lifebook trumped my Q1. My Q1 was larger but no physical keyboard. The only problem I would have had would have been the size. Here's an article on it but mine cost way more than $580 when I bought it.

Yep, I remember those. The Fuji was around $1,000 if I remember correctly. One of those get what you pay for things I suppose. The only other one that seemed likely for purchase was an HTC device that was a lot like the Asus Slider. Couldn't remember it but thanks Google Hands-on with the HTC Shift: UMPC slider | CNET UK.

Too bad it wasn't for sale in time for business school (or possibly ever in the US). This thing was my dream machine for a while. Funny how much of what we have now we actually had before the tablet PCs/UMPCs just didn't catch on. Technology has reached the point now though that their implementation can be much better and we just call them tablets.

I don't even think HTC was known here at that time come to think of it. 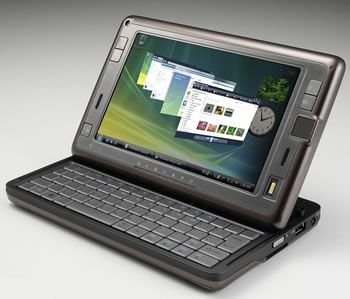 Never got one, wanted an OQO at the time, but they were so expensive 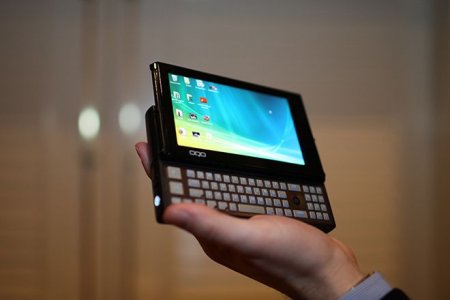 B
Sacrificed SP3 for Data

S
What is it with with Microsoft?