I would like to read my kindle ebooks, I had no problem finding an app for my pc but for some reason when searching on the SP2 could not find an app or reader program to use. How do I set up my computer to read my ebooks?

On the front windows panel is there an icon for windows apps?

And is there an easy way to put webpage icons on my desktop or windows panel? 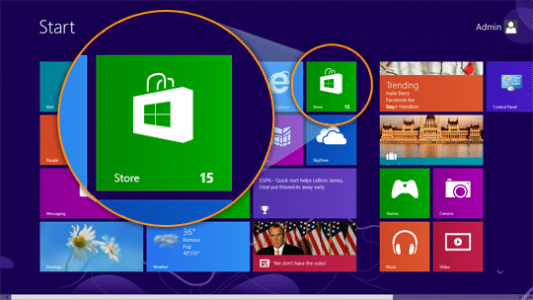 Just get the Kindle App from the Store. You will be accessing such app's from the Metro or Tiles UI. Why would you want to do this from the old school desktop? That is best for legacy applications or non-Metro app's.
OP
G

I am not sure what language you are speaking! Just kidding, I am not that tech savey to understand what all that meant, but did understand where to get the app and that is should work well. I am going to work on figuring out how to set up my tablet and it is nice there are two options. There are several websites I visit very often. For the week I owned an ipad air it was easy to create shortcuts on the home page for the sites I visit. Would I create a desktop icon for a website the same way on a pc, right click on the web address and choose the option to create a desktop shortcut? I had a little trouble doing this with the keyboard I purchased, I think it is the true type keyboard. I need to find a blue tooth mouse.
G

One of the point of the Start Screen, is to keep your desktop clean. Really your desktop is suppose to be like a table... an are where yuo do temporary work, but at the end, everything is organized at their respective location, or deleted.
Here is a nice Tutorial: How to Pin a Website (Windows)

Here is how the Start Screen works: How to Pin a Website (Windows)
Be sure to have a look at the "Help+Tips" on your start screen, to know how to navigate the new Start Screen of Windows 8

I am not sure if it can help, but this is how I customized my Start Screen on my Surface Pro 2

I hope this help you getting started with Windows 8. It's a great system once you pass the learning curve.
Last edited: Feb 6, 2014
OP
G

I have been playing around with it and I am really liking the tablet. I need to learn basic stuff like moving things around but so far I really do like all the screen options. I returned an ipad air that cost $860 with the LTE option and 32 gb of storage. I paid $250 more for the SP2 and keyboard but I admit I feel like I am getting much more for the money.
G

gstepic said:
I have been playing around with it and I am really liking the tablet. I need to learn basic stuff like moving things around but so far I really do like all the screen options. I returned an ipad air that cost $860 with the LTE option and 32 gb of storage. I paid $250 more for the SP2 and keyboard but I admit I feel like I am getting much more for the money.
Click to expand...

Awesome! The concept of productivity tablet was there since 2002, way before the iPad: 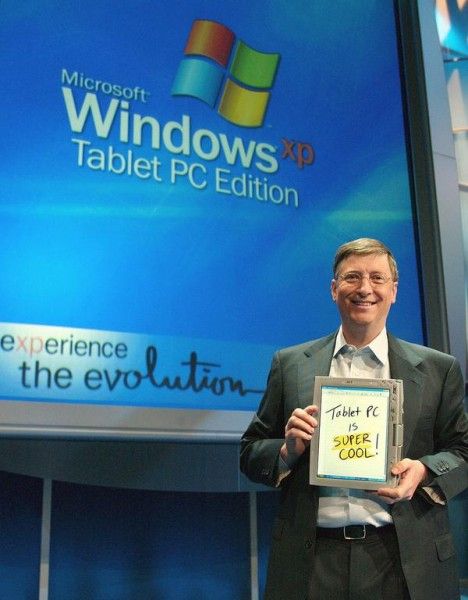 Sadly, it never picked up, because:
-> It was super duper expensive (around 3k for a model where you won't fight much with the pen (technology was not there))
-> It was heavy and bulky
-> It was completely, but I mean completely underpowered.
-> Battery life was a joke compared to today
-> It was big at 12 inch size
-> The screen had limited view angle (like normal laptops of today), which is more problematic for a tablet, as you put it in all sorts of position

Also, the interface made navigation very hard. The knowledge for good interface was not there for touch screen and pen, especially when you try to have multitasking as a prime thing with the system.

Just now, we have this a reality, more than 10 year later.

Anyway, just a small fun fact. Glad you enjoy the device!
If you need any help with your Surface Pro 2, or with Windows 8, be sure to ask, we will gladly help you.

Old tablets, god they were really bad. I had the joys of using this in a previous job...

We used to get so many calls saying their machine was failing to boot... however it was just because they were so slow! Literally took 10-15 minutes to boot from scratch to usable software. We used to offer free collections on faulty machines, but we had to start charging because the impatience of people was costing us money.
OP
G

I need to search for some online user guides, this will save time. I guess I am a typical guy that tries to figure it out first then if I can't I read the instructions. I am looking for accessories. I am looking for a hub where I can also use a regular sdhc card. Do I need a mouse specifically for windows 8? I have the true type keyboard which is really pretty decent and the trackpad is ok, but the click buttons are not quite as responsive as I would like, so an external mouse could be good.

I have a ten key pad that uses 2.0 port, I am hoping this will work.

I edited this post as the usb port is regular sized, it is my eyes that don't work so well.
Last edited: Feb 7, 2014
G

The Surface Pro 2 has a full size, standard USB 3.0. You can find it on the left side of the system, where you have the volume up and down buttons.

Any mouse either on USB 2.0/3.0 or on Bluetooth will work with the Surface Pro 2.

As for the track pad buttons, you can tap anywhere on the touchpad to click, or tap with 2 fingers at the same time, to right-click.
OP
G

Thanks, I edited my post as I found the problem was with my eyes and not the port size, my 10 keypad works just fine. I think this could be a handy accessory -

It is just going to take getting used to doing things a little different. I had my Lenovo W530 laptop side by side and was trying to touch the Lenovo screen (it is windows 7 system) and was trying to use my external mouse on the SP2 while the usb adaptor was plugged into the Lenovo. Just a little confused. Seriously, I am loving the SP2 more and more as I feel like I am not giving up much of anything (other than processing power and a larger screen) and am gaining a few things. I love the size, that was my main reason for the purchase. When I would go on a business trip or vacation I would be lugging around 40 pounds of gear in my camera bag, including my great but heavy Lenovo. Everything is getting smaller and better. I purchased a camera (the Sony RX10} that replaces a much larger body and two large lenses. Just like my laptop I give up some performance, but just like the Surface Pro 2 it is powerful enough to to the majority of tasks I want it to so without having to compromise too much. I owned the iPad Air for a week and felt like it was more like a handy toy and mainly good for web surfing, I was very disappointed with it. I guess it is like photography, if all you want is a basic photo most small point and shoot cameras are just fine. But if there is a certain level of performance demanded then they are not adequate. It used to be the next level required much larger and much more expensive gear, but that is all changing. Now I am really looking forward to my next business trip or vacation where I can take a much smaller bag on the plane or with me and/or as I walk around town without having a sore shoulder or back at the end of the day.
K

I use this mouse:
Microsoft Sculpt Comfort Mouse | Microsoft Hardware

It's pretty comfortable and have had no connection problems at all. Being bluetooth, it frees up the USB port.
You must log in or register to reply here.

S
Why Does My Desktop Photo Keeps Dissapearing?