I purchased a Surface RT a few days ago and I am having fun learning how to use it. I have been a Windows user for the last 20 years or so but I do have an Android phone. I tossed around buying an Android based tablet but decided I'd give windows RT a try. I think though mine has an issue.. there is a black speck that appears to be under the screen that never goes away. I didn't get the extra keyboard so I have to use the touch keyboard. It sometimes doesn't come up when it's supposed to, sometimes it doesn't stay up when it's supposed to...and... If that isn't enough, the sound for the keys work for awhile then the right bottom of it won't make sound again till I shut down and restart.

I really like it and want to keep it but I am worried about these few things. I hope I can simply exchange it... I'm sure I'll be browsing all the forums as I need them.

I have a $60 generic China-made ICS Android just for kicks.

The on-screen keyboard will automatically pop-up when using Modern UI applications. When using IE10, some sites may not conform to the standards which will cause the keyboard not to pop-up.

On the Desktop, the keyboard does not pop-up, and you have to bring it up manually.

Hey thanks for the reply. so my issue with the on-screen keyboard isn't a problem with the tablet...good...I imagine sites will become more compatible as time goes on...

The black speck isn't showing up on a screen capture, so I will have to take that with my phone. If it helps, the speck does not move with the screen if I stretch out a picture or enlarge the page. I can move a white screen back and forth and the speck doesn't move. And I did try many times to 'wipe' it away.

The sound the letters make when you press them is what I'm talking about on the on-screen keyboard. I restarted and now they work. So I might have to chalk that up to lag or whatever. What happened was, after a couple of hours messing around, some of the letters on the lower right would not make sound when you touched them. This has happened a few times.
OP
C

Here is a pic of my offending black speck. 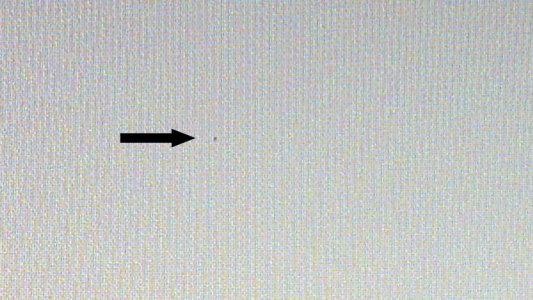 Perhaps dead pixel (just a guess without seeing it), so it could be accepted for replacement.

The audible "clicks" you described with the on-screen keyboard has always workd for me, even before the first ever Patch Tuesday. You can observe it further before making it a cause for exchange. But it does have a pixel issue... so there.

craftygirl said:
Here is a pic of my offending black speck.

Looks like a dead (no light) pixel to me.
OP
C

Well, now I am going to have to read up on backing it up... I have downloaded things, personalized it... LOL but if I'm going to have a dead pixel, I want to kill it myself...

Thanks again for the help...!
Barb

If you created a Microsoft Live account your settings will be synced to the cloud. Your Microsoft account syncs favorites and settings on all your PCs - Microsoft Windows

Congrats and welcome. Too bad it sounds like you need to exchange your first surface but you should do it sooner than later.

Hope you were able to exchange your Surface for a good one.
You must log in or register to reply here.

Surface RT is a Step Forward!