Premiere Pro users; are there any?

I have been using Premiere Elements for years but it doesn't run well on my SB. Imported jpg and tiff mages display with verticle lines. When I use PrE on my very old desktop this doesn't happen.

I installed Premiere Pro on my SB last night and I could not create a "new project", PrP went into "not responding" mode!

I had GeekSquad run their "Tuneup" to make sure there was no malware or viruses. Then had them try to open PrP and they got the same result as I'd been getting. They claimed that there was a bug in the new release. Wrong! I installed it on my very old desktop and it runs fine!

On a video editing forum, I was told

That computer really isn't powerful enough for Premiere Pro, but if the video card is acceptable, it should open.
You may need to disable the built in graphics.
What graphics card do you have
Click to expand...

But GeekSquad said my SB was a "good gaming machine and should be able to run PrP". But, in my opinion, they are nothing but a bunch of hacks who only know how to run "tune-ups", so I take what they say with a grain of salt.

Someone here once told me they had no problem with PrE but I haven't talked to anyone running PrP.

I have been considering reverting my SB to OOB and starting from scratch but I don't want to do that if others are having this same problem.
OP

Still hoping to hear from someone using Adobe Premiere Pro

I use Premier Pro without an issue but I have a Surface Book w/ Performance Base with jpgs, from my a7rii. Have you tried removing adobe PP restarting then reinstalling?! Also assuming you have a dGPU model have you set Premier pro to use the NVidia GPU instead of the integrated intel 520 from within the nVidia control panel?!
OP

Thanks so much for this encouraging response, I have been almost given up on this SB!

JaeMelo said:
I use Premiere Pro without an issue but I have a Surface Book w/ Performance Base with jpgs, from my a7rii.
Click to expand...

Have you tried removing adobe PP restarting then reinstalling?!
Click to expand...

I installed the 6-day trial. It opened but it would not let me create a project. I finally gave up and uninstalled it.

But I even have problems running Elements, my jpg images display with vertical lines. I've had to go back to my very old tower.

Also assuming you have a dGPU model
Click to expand...

Not sure about that.

have you set Premier pro to use the NVidia GPU instead of the integrated intel 520 from within the nVidia control panel?!
Click to expand...

No. But I've removed PrP at this point. But I still have PrE, with the vertical lines issue.

But I have no idea what I'm doing when it comes to configuring video cards. I did contact nVidia but the verticle lines issue but told me MS modified their chip so they couldn't help me. I also installed the "GeForce Experience" hoping I'd find something there that would help me figure out why my SB was struggling with PrE.

At this point, I am seriously considering a new machine because I've been told my $2,900 SB isn't up to the task, which just baffles me!

Ok give this a try:

Under
1. Select a program to customize:
(Choose a program that you're experiencing vertical lines with)

3. Specify the setting for this program
(Scroll down mid way and locate "Power management mode | Optimal Power" and change this to "Prefer maximum performance")

Then click "Apply" at the very bottom to save your changes.

Give the program that you specified above in the NVIDIA Control Panel another try and see if you're still experiencing the same issue.
OP

I was so encouraged by this but after I made the changes and rebooted my machine the problem was still there. 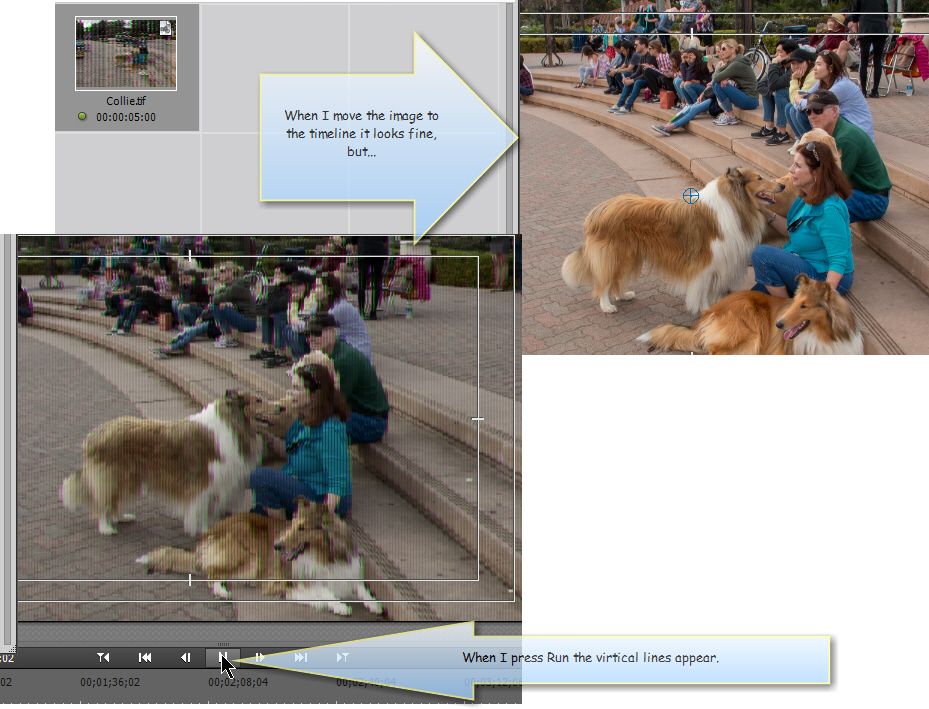 Is it possible that there is corruption of some kind in the OS?

With that in mind, I reinstalled the OS a couple months ago, but it wasn't a clean install, I installed it while keeping my data.

I wonder if I reverted the machine and reinstalled PrE again the problem might clear up.

I am really trying to avoid coughing up several $K on a new machine!

When I bought this machine I was so convinced that it would be able to handle Adobe editors. It actually does handle Lr and Ps pretty well, but I'm doing a lot of video work lately and have to go to my old Tower that doesn't have a large ext monitor set up.

I've circled in my screenshot a drop down menu. Can you please set yours to "Full" also if it isn't set to that already and report back on your findings?

Edit: I just realized your Adobe Premier Pro isn't the same version as mine. Just out of curiosity what version of Premier Pro are you running?! Is SB unique with respect to the OS