hi, I am still confused after a couple of weeks how to get a hi-res external monitor set up.

my first try was with the mini displayport ==> VGA connector, but the picture was a bit fuzzy.

then I tried an hdmi cable, but that cut off pieces of the screen on my higher-than-HD-res monitor. didn't relize hdmi was limited to 1920.1080 (duh).

now I am headed out t get a mini displayport to displayport cable for higher res (or wil DVI work I guews?)

you should try to play with settings on your tv. change the surface pro output resolution to match the max resolution your monitor can support, then make sure the monitor is on native setting; no zoom or widescreen.
L

I was going to start my own thread but decided to bump this instead. Who else is using an external monitor? I have a Samsung 24" 1080p LED monitor that i was using with my old work laptop(which my surface pro has replaced) and i instantly noticed that it was blurry or fuzzy.I'm using the vga adapter from microsoft. After only 30 minutes of use my eyes started to really go crazy. I tried native 150%, 125% and 100% scaling. I'm not sure what it is.

I was hoping someone had some experience using the vga adapter and could compare it with using a dvi or dp adapter instead. I NEED to have the big screen for when i'm in my office. For now i'm just working off the SP screen because it was too straining on my eyes.

The problem is probably that you are using VGA. This is an older connection standard. DVI, HDMI or display port connections would all be preferable.
J

I use a minidisplay port adaptor to hdmi to drive a 27" Planar monitor at its max resolution of 1920X1080. My friend has a SP that she drives via a minidisplay port adaptor to vga at a higher resolution than 1920X1080. I don't recall the exact numbers, but I will find out what they are in a few days when I see her again. The vga cable is a standard vga cable on both ends because I replaced the cable with one of my own. She already was driving the 27 or 30" display from her laptop before she bought the Surface Pro so all I did was let her use my MiniDisplay Port to VGA adaptor that I bought from Amazon.com for less than $10 which included shipping charges. Her display is running at something like 1920 by 1200 as I recall, and I might be wrong, but it is definitely higher than my resolution. I will have better numbers within a week. Her display is at least as clear and bright as any display I have ever seen, with the exception of Apple Display 30" monitors.

By the way, does anyone know how to split the output from a Surface Pro to drive both a 27" and a 24" monitor at the same time? I've heard that it has been done at the Microsoft Store in Century City, but I am not positive as of yet. Here's hoping.

I use a Mini DP to HDMI cable to drive a 23" Dell Touch Screen Monitor S2340T that someone on these forums suggested. Its max Resolution is also 1920x1080 and the resolution is VERY CRISP, VERY CLEAR. Attached is a picture of the adapter I use. StarTech.com MDP2HDMI < - Great Part number eh? J5150P is absolutely correct about VGA, its bad and should not be used unless its the only option for a larger display. If the larger display you have does not support DVI or HDMI or DP, I would consider upgrading when $$Flow allows. 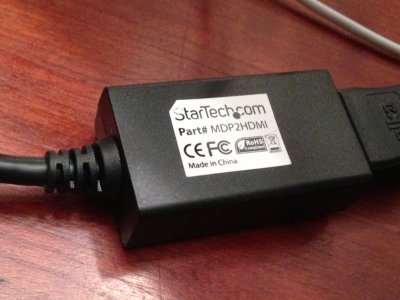 at the moment the display i was using was VGA only. Looks like I'll be buying a new monitor lol

lkailburn said:
at the moment the display i was using was VGA only. Looks like I'll be buying a new monitor lol
Click to expand...

It still shouldn't be blurry under normal circumstances but VGA is my best guess as to one potential issue. Certainly if the monitor is VGA only it must be old and/or cheap. Newer/better monitors should have alternative inputs and still not be very expensive
L

ya not old, just cheap. use it for just office work. my previous work laptop had a vga out and the image on this monitor was crisp and clear. after using the sp on the display though my eyes were strained and was giving me a headache. looks like there are plenty of 24" ips displays for $200
You must log in or register to reply here.