Hi, my first post, even though I have been an active lurker like forever. I have been really struggling with setting up my SP2 with two external monitors and spent lots now on monitors and cables and still can't get things to work, and I could really do with some (very) simple instructions on where I am going wrong.

When I first did this all three monitors were recognized (the SP2 screen and the two external monitors) but the SP2 saw the two Dells as one screen only. Initially it projected everything to all three screens (identical). Then when I said extend, it would set the primary display as the SP2 and then an extended screen on the other two, but no matter what the U2312HM is a mirror of the U2414H.

What I then did after a bit of research is try enabling the Display Port 1.2 settings on the U2414H (since it was disabled by default) but now I've lost the U2312HM monitor completely instead of being able to extend to it. No matter what I do, the SP2 just does not see the U2313HM it seems.

Well, you certainly appear to have the DP setup correctly: As long as your source SP2-connected monitor (i.e., the Dell U2414) has DP 1.2 enabled, then you should be good to go by simply connecting the U2312 to the U2414.

Unless you have a defective cable, you should see 3 monitors on the SP2. That is, when I right-click and choose Screen Resolution on the Desktop, this is what I see: 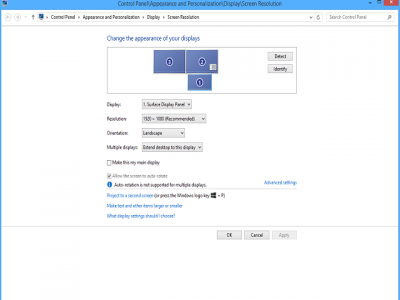 What do you see when you do the same?
You must log in or register to reply here.