HowTo How To and Master Help Guide for the Surface Book

Staff member
Need help with your Microsoft Surface Book? This is a good place to start.

The Staff of SurfaceForums.net provide this thread as a compilation of how-to guides, fixes, help tutorials and tips which have solved problems or saved time.
OP

Click:
How to detach or re-attach your Surface Book Clipboard (the screen) to the Base (the keyboard)

The detached screen may be charged using the Surface Book power supply. Attach the magnetic "blade" charging end to the bottom edge of the clipboard where the keyboard would normally attach.

The detached screen may also be charged with a Surface Dock. Connect the Surface Dock blade to the bottom edge of the clipboard where the keyboard would normally attach. After connecting, the dock also provides the clipboard access to its USB and video ports.
OP

If you are upgrading to a Surface Book from another Surface Book, or, say, a Surface Pro 3, or any other PC under Windows 8 or Windows 10, your Microsoft Account will be able to sync many of your settings automatically. But OneDrive files should be transferred before you do various updates on your new computer. Many Microsoft updates will halt until OneDrive completes. So, here is a tip that could save you hours of time, and perhaps also save you from losing some precious files:

2) After signing onto your new computer with all your Account credentials (Settings, Account), exit OneDrive. You will find its icon on the lower right of your desktop, or if you don't see it there, click the "^" icon you see in that area. The OneDrive icon is usually shaped like a cloud. Right-click and choose Exit.

4) Start OneDrive, by clicking once on the cloud-shaped icon you found in step 2) above. OneDrive will then make sure the files stored on the cloud (somewhere out there) matches your set. You may then proceed with setting up your new computer.
OP

If you ever carry the Surface Book Base (the keyboard) separately, protect the hinge. Even though the three exposed blade connectors sticking out of the hinge are quite strong, give them some extra care by making sure the hinge is as open as possible. You would not want them to bend or get crushed in a backpack or luggage or travel case.

Staff member
Open Edge to a Fast, Quiet, Custom, Reliable Home Page of your own

If you wish to uninstall Windows Store apps many will uninstall when you right click on them in the start menu. The problem is, they will come back during the next app updates from the Store.

In order to truly uninstall an app, use the following as a guide. This will even uninstall apps that don't provide that option in the start menu, such as the XBOX app.

Staff member
USING THE PEN WITH YOUR SURFACE BOOK

The Surface Pen (4) provided with the Surface Pro 4 and Surface Book differs from the Surface Pro 3 pen in several ways: The pen writing nub is different, the pen is pressure-sensitive, buttons placement and purpose are reconfigured, and the pen is magnetic, for attaching to your screen.

If your pen is not paired to your computer, or not all the functions work, read below "Connect the Pen"

Top "eraser" button:
- One click opens OneNote, allowing writing immediately.
- Two rapid clicks (double-click) takes a screenshot. The screenshot is stored in the Screenshots folder (default location is C:\User\[account]\Documents\Screenshots, but the pen can be used immediately to crop out a particular area of the screenshot.
- Click and hold to start a Windows search, hosted by Cortana.
- Bring the "eraser" button to the screen to undo, or "erase" your writing. In some applications, the eraser button can also be used to draw, though this may be a bit clumsy.

Side "right-click" button is located near the writing tip of the pen, on its flat edge:
- Hold the button and touch the screen for a right-click. This is the same action as touching the screen with your finger and holding.

Battery Indicator
- A single AAAA battery powers the pen. A tiny LED is located around the pen opposite the pen clip. If it glows red, your battery needs changing. You may want to keep a couple of spare AAAA batteries in your computer travel case.

Pen sensitivity can be adjusted by opening the free Surface App from the Microsoft Store . If you apply any kind of physical glass or plastic screen saver to your screen, you will certainly want to do this. For most people, the default sensitivity is just fine.

Get started:
To try out writing with your pen immediately, you might
- Give the "eraser" a single click, and begin writing into OneNote.
- From Edge Browser, click the icon of a pen in the upper-right (or tap it with your finger). Begin writing with the pen.

Connect the pen:
Of course, if your pen is not paired to your device, it must be set up.
1) Settings, Devices, Bluetooth
2) Turn Bluetooth on.
3) Hold the "eraser" button of the pen for seven seconds until an LED glows white.
4) Click Pair

If the pen shows as already paired, but is not working, select that item, and click Remove device. Then start from Step 3.

If you cannot get the pen to Show by name ready to pair in Bluetooth Devices:
Uninstall the pen device driver, and allow Windows to re-install. Updated drivers are also available here. Windows may not show the pen to be available when connecting the Surface Pen 4 to a Surface Pro 3 which previously had the Surface Pro 3 pen.
1) Start, type Device Manager
2) Find Human Interface Devices, Surface Pen Settings, and Uninstall the driver. Do not remove the driver, however. Immediately re-try to connect the pen, according to the instructions above. 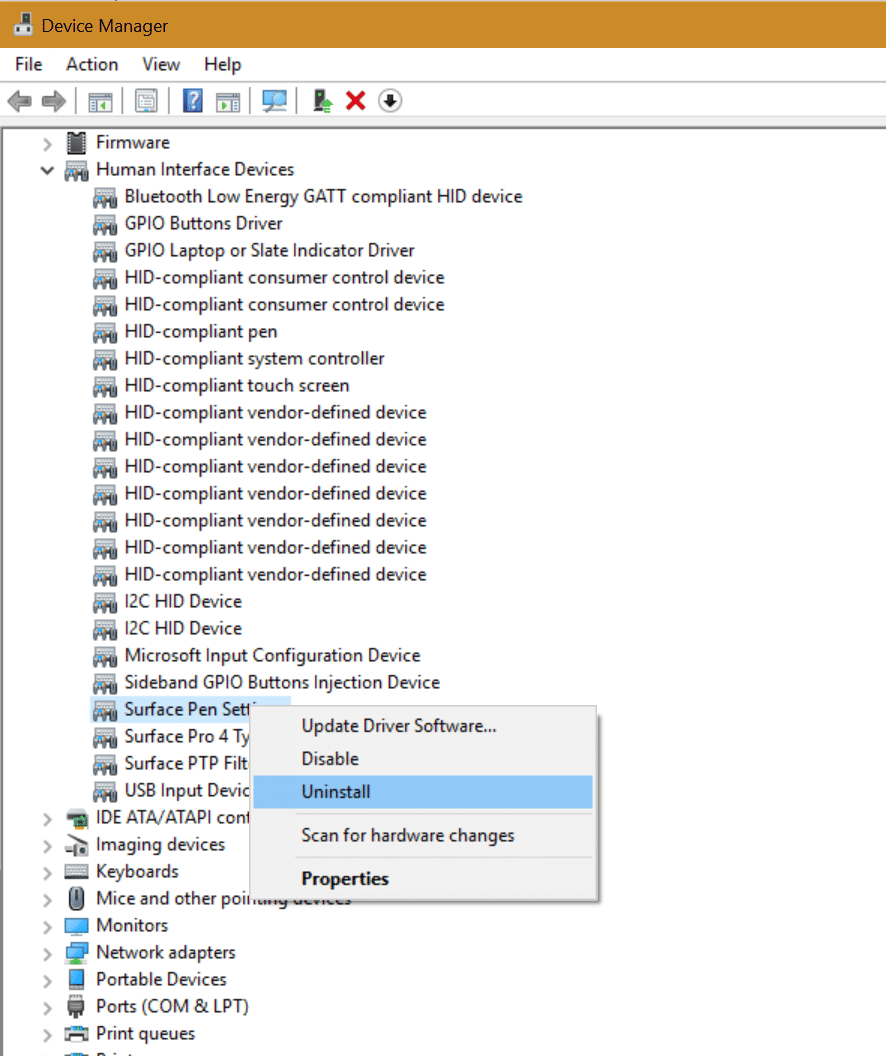 Use a pen previously paired to a Surface
If the pen is already paired to another Surface device within range (less than 10m (33 feet) feet or so), you must either un-pair (remove) the pen from the Bluetooth list of that device, or power the device down. A single pen cannot be paired to two devices.

Battery usage and reports
Battery status reports on devices like Surface can be very informative. It's possible to tell a lot bout what may be consuming battery and its general health. This is a primer on the basics. (most if not all of these commands will work equally well on Windows 8.1 or Windows 10. Your report formats may vary)

PowerCfg should be run at an admin command prompt. Type cmd in search, right click on CMD and click run as administrator. All reports can be found in the \Windows\system32 folder by default in the forum of an HTML file.

Energy will show what is generally consuming the most battery. It's an efficiency/diagnostics report

Batteryreport will provide the following information.
Sleepstudy is a great way to find out what is running while the Surface is sleeping in Connected Standby.
OP

If you are having problems that you can't quite figure out, with some type of connectivity, such as getting an external monitor working try this.

After you release the buttons, wait 10 seconds. Then press and release the power button again to turn your Surface back on.

how to detach surface book

how to detach surface book separate from keyboard

how to detach the screen surface book

how to develop an app for surface rt

microsoft how to detach and reattach surface book pro