scasn4 said:
Cant teach a old dog new tricks.... Microsoft have failed big time. why spend all that time and effort oh and money on such a beautiful product and then mess (and the word mess was chosen wisely) the logistics up ??????? school boy errors (shame on them)
Click to expand...

Not that it is an excuse but this is something that is certainly new to MS. They are not a first party retailer. They have established distribution chains for things like keyboards and mice and xboxes and they ship software to partners who put it on computers before they ever go to a customer, not to mention that this is probably all contracted through third party vendors (the manufacturer, shipping company and call center) and they likely have nothing to do with it directly. Sometimes there is no replacement for experience.

Got my typer cover today. Called the support-line, if this meant to be a bad joke.
My first order couldn't be restored, no signs of voucher. Instead my second order is now in progress - but with the wrong part showing up first. Surface shipping time: 3-weeks.
K

Having received my surface yesterday, this morning I received an email with shipping information.
Nice idea, first the device and then the info.

Have a great day..
Knut
G

Spoke with Support and they are going to send a replacement - Let's see how long this takes to turn up!
B

My wife just took delivery of mine, can see an early finish today.
as an indicator I reckon if the money is taken its next day delivery.
OP

Spoke with Support and they are going to send a replacement - Let's see how long this takes to turn up!
Click to expand...

Just thought I'd give everyone an update.

So I received my 64 GB Surface on Monday, which I noticed had slow loading times on Applications and in the menus of the 'Music' application, which I put down to software. (You can see I asked about this in a different thread)

Today, 5 minutes ago, I just ended a phone call to Microsoft asking about the performance issues I was having with the surface, sounded like a Scottish call centre which is great - no Indian accents for things sold in Britain - and they were very helpful. They did some simple troubleshooting and came up with the simple task of refreshing the device and if that didn't help doing a complete system restore.

I said this is simple, I know how to do this and went ahead to settings > general > refresh telling her what I was doing on the phone all the time so she knew I was doing it right. Keep in mind this device is only 3 days old, I went ahead and clicked refresh but it didn't like it. Instead the device insisted it didn't have the files needed to complete the restore and I was to insert the installation media into the drive to refresh - what installation media?

Anyway, the woman on the phone transferred me to her supervisor which took the rest of the call. He attempted another restore and told me to plug the device into the mains which could maybe get over the problem, but it didn't.

I was a little annoyed to say that I'd received a faulty device, but the Microsoft Support made up for it - It's a different support centre and different people to the Microsoft Store, which you're all have shipping problems with.

They took some details and have sent a new device which should arrive between 2 - 5 business days, in which I get a free post label, put the faulty one in the new box and send it all back.

I was impressed by this support and the feature that I can have a new one sent out so I don't miss a day without my surface, a slow - but working Microsoft Surface.

Can't wait to get the problem fixed and can't wait to get one with a bit of speed under the hood. If anyone else has some performance issues I would suggest giving them a call, seeing if you can "refresh" or "restore" the device without problems, you may have a fault product but you don't know it because at the moment it "works".

What do people think the delivery lag is now? If I ordered today, are we still talking 3 weeks before delivery?
Is there a clever way of being able to choose your touch cover color, or is it a case of getting a black one and that's that unless you but a second one?

So i've had to reorder mine on October 26th - today i'll be delivered D ). The shipping time of 3 weeks could be some sort of rough estimate - but there's no guarantee, maybe depends on your location.
Best way to choose a different color is to buy a surface without cover and order your color additionally.

Edit: UPS had a heart and showed up 2hrs earlier than usual: 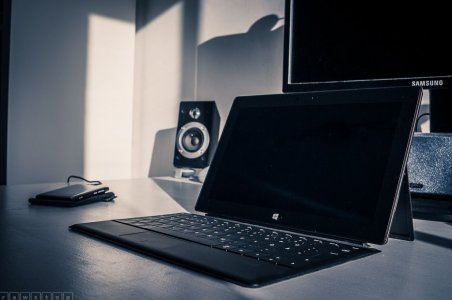 Simply beautiful. What did you use to take the picture?

Yay, got back from holidays to find my RT (box opened) on my desk!
They hadn't fully unwrapped thankfully!!
and a 64GB microsd card

J515OP said:
Simply beautiful. What did you use to take the picture?
Click to expand...

[off]
I've taken the picture with my Sony NEX-3, a Sigma Super Wide II 24/2.8 manual lens and the raw was processed with Lightroom.
[/off]
on:
My 64GB-Surface and my 64GB-Card arrived today - it's time to make a decision

So mine did arrive on November 2nd after all, that computer - it KNOWS
You must log in or register to reply here.

UK pre-orders, when do they generally arrive?
2

A
Hello from North Carolina!!!