That's right, Desktop Replacement.
I'm setting up a new SP3 for Ladyfriend. The SP1 replaced her laptop for her travels to China; the SP3 will replace the SP1 and her desktop computer in her home office. With the I7 chip and 8G memory, it has ample computing power for her uses. She will have docking stations, complete with external keyboard & mouse, plus external monitors and USB3 strips, at her three main locations: work, home office and Shanghai home/office. The SP1 has been the pathfinder for this plan, but now the SP3 closes the loop. I'm using Stardock's Start8 to give it the desktop functionality. She uses it in tablet mode on planes and trains.

I've had the SP3 for a couple of weeks, just to play with and set up. Setup has been smooth and uneventful, except for discovering that Win8.1 does not support the origination of Windows Easy Transfers. I bought PC Mover Pro to move the settings & stuff from her SP1 to the SP3. Haven't done that yet, as PCMover Pro estimates a 10 hour task, and right now she's too busy to give up her SP1. Also need her here to check out the Handwriting Recognition feature, since I can neither read nor write Chinese characters. I know it will work, because we're already using it on the SP1, but knowing it and doing it are sometimes not the same.

I have come to love the SP3 in our short acquaintance and will hate to give it up. I have installed all the major software and have had no problems. Right now it's connected to my wired network for faster downloads and such, but have also used it in WiFi mode extensively.

Major problem right now is coming up with a defensible reason why I really need one to replace my SP1.

Russ said:
Major problem right now is coming up with a defensible reason why I really need one to replace my SP1.
Click to expand...

Yeah, well, there is that. I'm just back here in the woods with two dogs, so it's not like there's anyone to nag me about it, but it would be nice if it made a modicum of sense. I don't travel much anymore, and I already have five computers on my wired network, plus tablet (SP1) and phone on the wi-fi, so it's not like I need more computing power.

All that having been said, the longer I get to play with this one, the greater the likelihood that I will "need" one of my very own.
Take care,
Russ

Yeah, well, there is that. I'm just back here in the woods with two dogs, so it's not like there's anyone to nag me about it, but it would be nice if it made a modicum of sense. I don't travel much anymore, and I already have five computers on my wired network, plus tablet (SP1) and phone on the wi-fi, so it's not like I need more computing power.

All that having been said, the longer I get to play with this one, the greater the likelihood that I will "need" one of my very own.
Take care,
Russ
Click to expand...

Needs and desires change over time, as the form factor of the devices we use. I've had plenty of laptops and convertible laptop/tablets before now, including an SP1. The last couple I've bought are still plenty powerful enough really to meet my actual "needs".

But the SP3 is the first one that I've loved. It is is just such an enjoyable device to use. So that element has to count for something- that even though you do have other device, it's this one that really excites you.

Just eBay the others that you're not going to use any more...

p.s.- Your lady friend is very spoiled!
Click to expand...

Michael --
"Need" is, of course, a very relative term, and I tend to address my "wants" long before I get around to my "needs."

I don't need to ebay the other stuff when I stop using it. I have grandchildren who love to get my "cast-offs."

Ladyfriend may be spoiled, but I am a lot moreso. When MS first announced the SurfacePro, I bought one for her on the 1st day of release. I knew it was a perfect laptop replacement for her, especially with long China trips. I set it all up for her, and she was so pleased with it that she bought one for me. I told her then that I really didn't need one, but she just shrugged and said, "No matter." To say that she follows her own drummer might be the understatement of the year.

She is already excited about the Pro3, and I have this nagging feeling that if I don't get one for myself, she will do it again. It will not matter what I say, because at times like that, trying to dissuade her is like talking to a doorknob.

DPI setting is the only nag I have about the sp3 as my full on desktop and laptop replacement.
I've just resorted to a different resolution and dpi if I'm away from the dock for days or not...

otherwise...I have a few field mgt. drooling over the tools I use that aren't available in Android and IOS...

I'm picking up a second dock soon to get rid of my home PC. No joke...

I admit to being a long term computer nutcase, but in a moment of rare lucidity parsed as public humor (and in front of her), I posited that my wife let me indulge all my computer wants as lesser than the vices of women and wine. Cost less too. And, ahh, she gets all the hand me downs which fit her needs perfectly.

Staff member
My SP3 i7 512 replaced my desktop months ago (August 2, 2012, the day after I started using it). Now, I haul my "desktop" around the world, even on 2 wheels, which has become a whole new dimension in productivity.

I have been using laptops for many years. So it was an easy move to the i7 with 512ssd.

As you have set up for your friend, I have an external 27" monitor in my office and study at home. If you re-boot the SP3 without an external monitor, it will need to be re-booted when you connect to a monitor again. Otherwise text looks very blurry. Not a problem as long as you know.

I use the Logitech K810, bluetooth keyboard and couldn't get on with Microsoft's bluetooth wedge which I found very jerky when I was scrolling, so keep a small Logitech mouse with USB dongle.

Chris Grew said:
If you re-boot the SP3 without an external monitor, it will need to be re-booted when you connect to a monitor again. Otherwise text looks very blurry.
Click to expand...

Thanks for the heads up. I had not had occasion to do that, so it was just lurking in wait to mystify me.

She is excited about the idea of having the SP3 as her primary computer, as it avoids a common occurrence of being at the office, or worse yet, Shanghai, and needing the file she was last using on her home computer.

I, too, have been using laptops for a long (no, make that long, long) time. My first laptop was a TRS-80, Model 100. It is amusing to remember how pleased I was back then to be able to work wherever I was, especially as I spent a lot of time on airplanes. (Most of you will need to look it up just to see how primitive it seems now, but it was a real time saver for me then.)

Staff member
My first "laptop" (just because of its size) was a Sinclair ZX80, then a Timex Sinclair ZX81 after that. I publushed machine language articles in SYNC Magazine during the early 1980s (first page shown below of one example). The machine language was written as a wedge to insert into the OS via direct addressing with BASIC, using the POKE function.

My Surface Pro 3 is about that same size - and it is also now my desktop. I am amazed that the SP3 is only about 5 times the cost of that machine (correcting for inflation, 1982 to 2014). 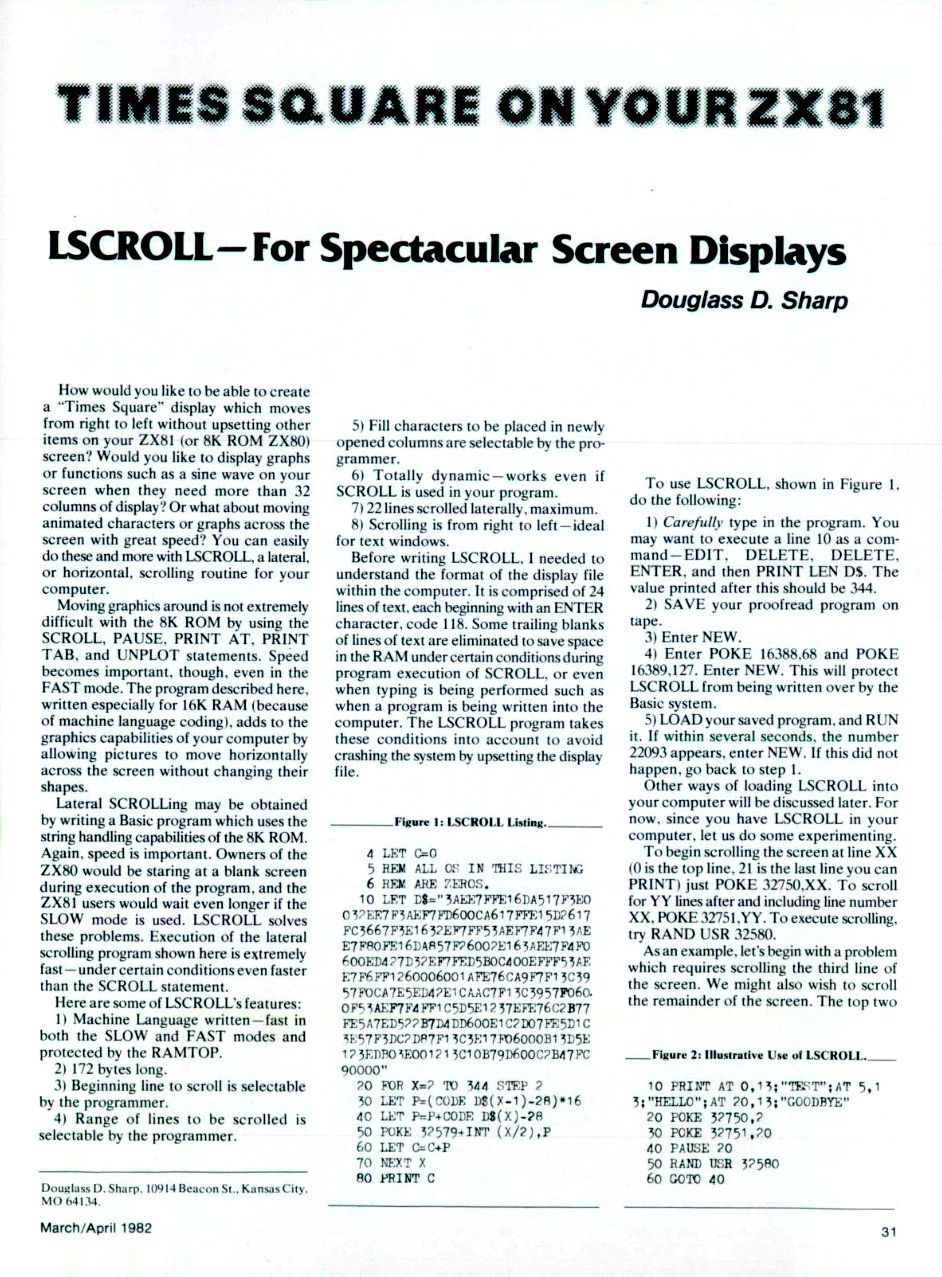 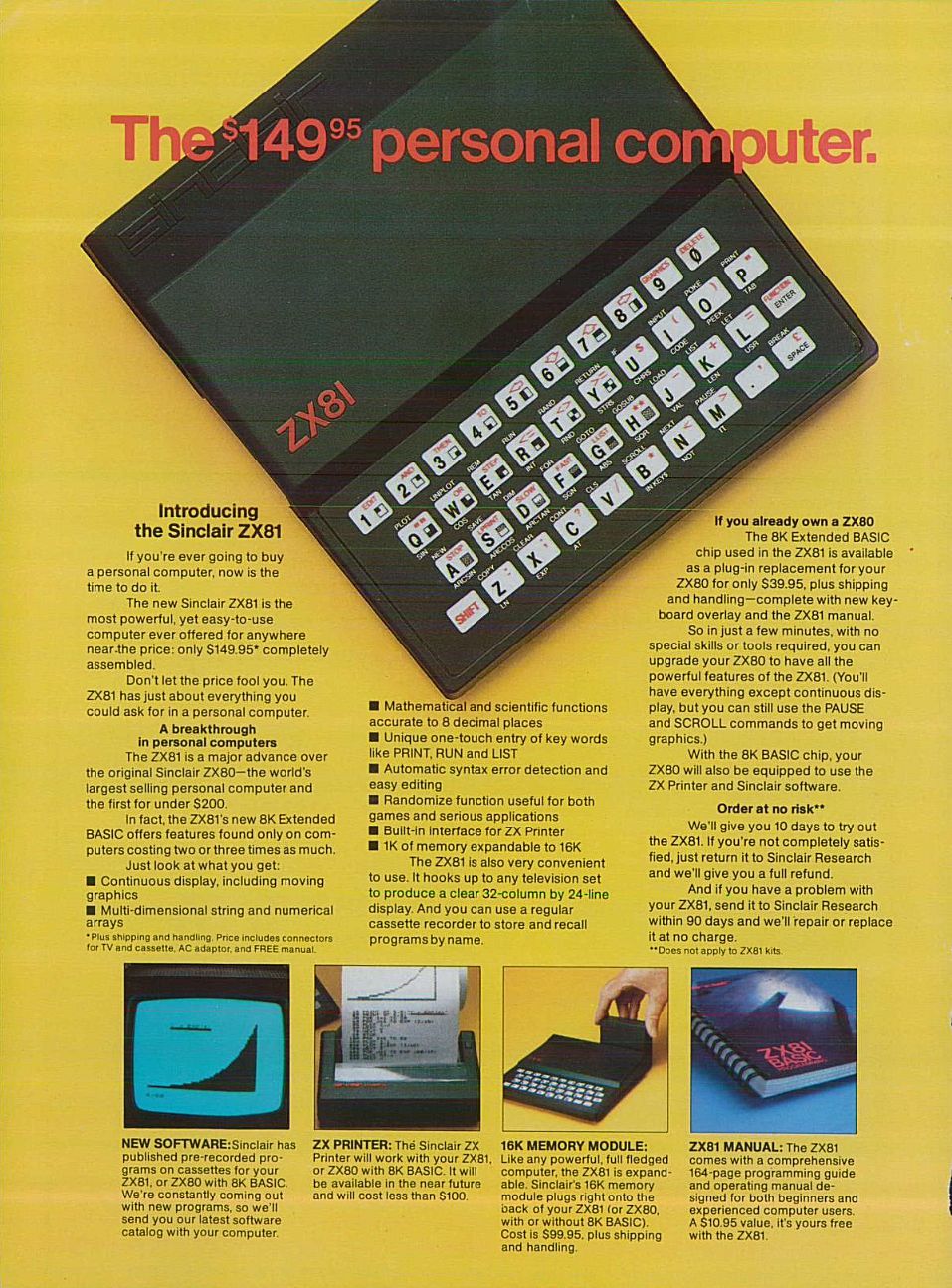 sharpcolorado said:
My Surface Pro 3 is about that same size - and it is also now my desktop.
Click to expand...

Therein lies the beauty. I think the SP3 is actually smaller than my bleeding-edge TRS80-100. The overall form factor is about the same, but the SP3 is thinner.

Thanks for a good chuckle as I read your copy about the "string handling capabilities of the 8K ROM." Massive power, indeed.

Take care,
Russ
You must log in or register to reply here.

Upgraded with no issues

Feb 13, 2015
GreyFox7
G
O
How to change the background color for main windows

Does anyone else think their SP3 might be running a little cooler since the 8/19/14 firmware update?
2 3